Here I'm presenting the level of failure our beloved MENA administration has reached. It saddens me that MENA server (yes I should call it MENA only, because TR is part of MENA) has becomke way too inactive than before even though you see lots of players around who the majority are 24/7 doing AFK lifeskills (due to the recent upsetting PvP changes). Despite that SEA server was launched 2 or 3 weeks after the official launch of MENA server, the number of playerbase in the latter region has increased drastically over the past few months. Ironically, SEA server is available in 11 (or 13) countries, while the number of countries in which MENA server supports is 23, yet it's mostly targeted for the Turkish population, leaving other MENA countries marginalized!

Now let's check the number of Likes on Facebook for each server.

You can notice the huge difference between the two despite that the langauge used to communicate with SEA population is English while MENA largely supports Turkish and little English for non-Turkish players. English isn't even used when it comes to disseminating information and updates about the game on social media which is supposed to be used to reach out all people within the region. We've talked about this many times before yet all we get is negligence from our beloved administration of MENA server. 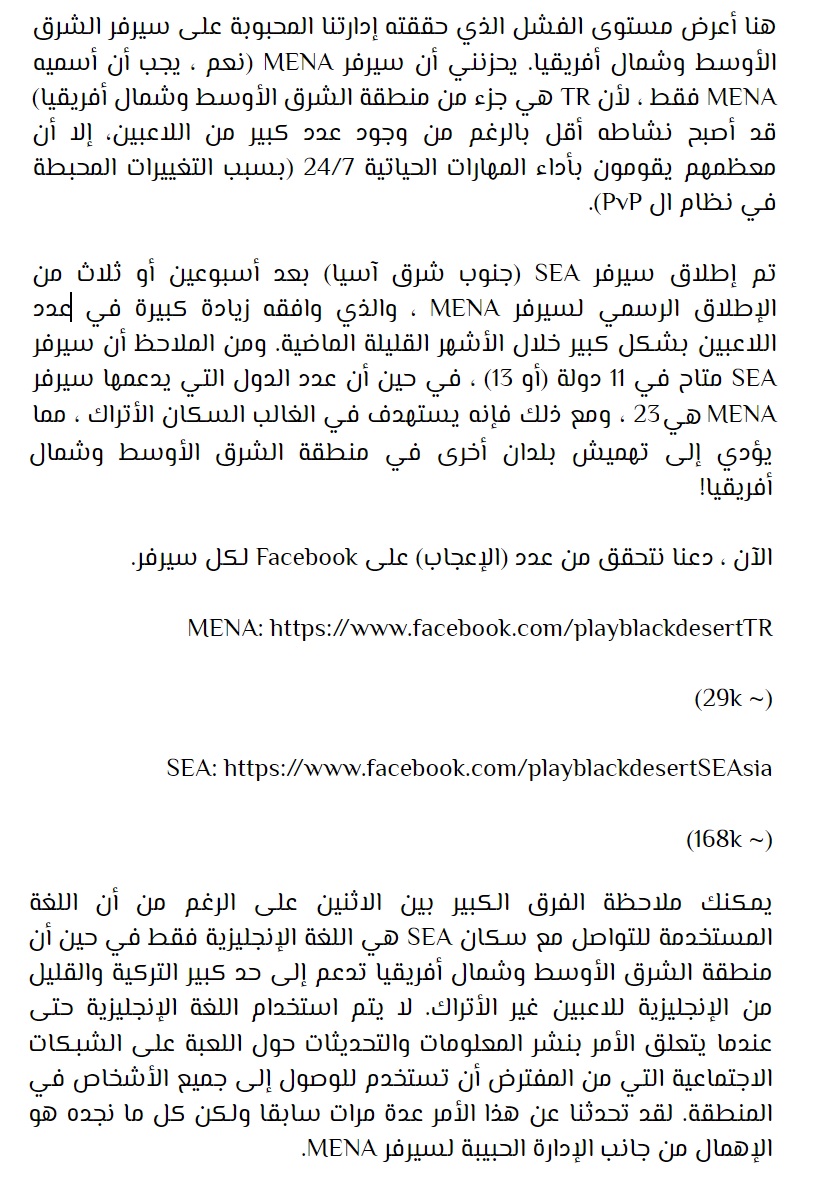 RedName
Lv. 56
true 100%%%%
XxXT
Lv. 55
This is soo true but we know they will never do anything about it..
Atome
Lv. 53
totaly true!! a got the feeling of being ignored and i'm thinking about returning to Europe server
Jandolf
Lv. 60
Thats true and sadly
Madthog
Lv. 56
السيرفر ذا مات خساره 300 دولار الي دفعتها
Alter
I totally agree with you. I am from Turkey, but the people on the server and the management team only think of Turkish player base. I think they need to reconsider their behaviour against players.
Medre
Lv. 60
I agree with you, I think we need to start something as the playerbase such as flooding them with support tickets or demonstrating InGame.
OrochiMishima
Lv. 17
I don't know why they called it MENA when everything is for turks
even the first time i entered the website like 2 days ago, the default language was turkish
Cancel Register
Cancel Register
# 2

@Seraphiel If you could message me ingame ( familyname. Kinayu ) or in Discord Medre#7013 I would really appreciate it. I need your help for something that will probably help and motivate arabic players

2018-05-19
Character Name Medre
Main Character Wizard
Lv60
Comments 1
0
Report
IAkumaI
Lv. 58
This server should be a success for many reason. Middle East players are paying so much ingame cash for either P2W but in real this helping all other player who want aquire pearl shop item easly..
Cancel Register
Cancel Register
Go to List