(Patch size: approx. 1.07 GB)
- Please note that the update for Steam may be larger than the size listed above. 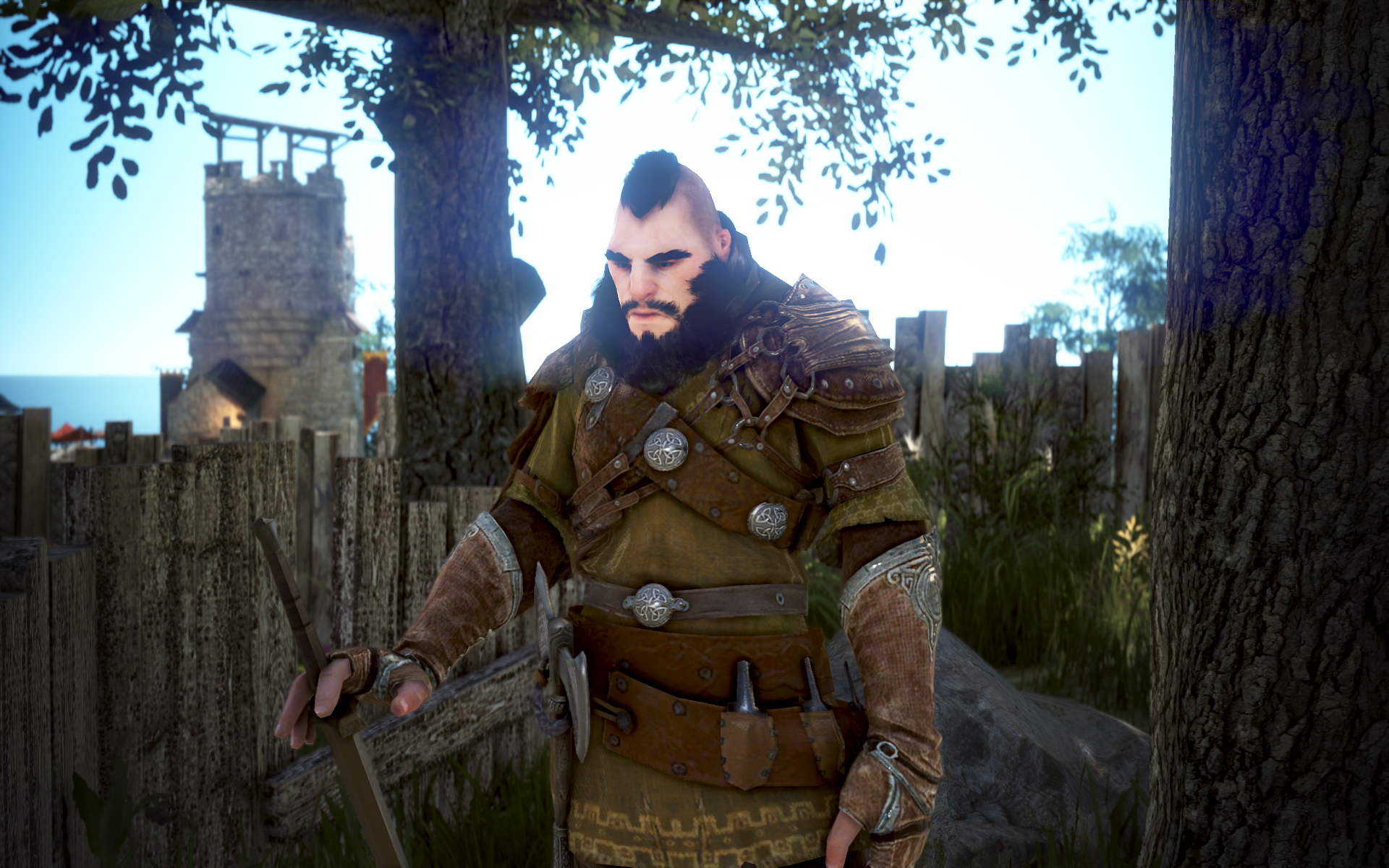 ● Changed trial characters to be unable to activate Forced PvP mode (ALT+C).
● Fixed the issue where you couldn't see the appearances of other Adventurers located in monster zones sometimes.

● Yippee! - Changed to be available for Quick Slot.

Quests to help Adventurers learn the fundamentals of Farming have been added. You can obtain one Fence that doesn't require Contribution points upon completing the questline. We hope this will make it appealing to Adventurers who already enjoy Farming. As long as you have Contribution points to rent a "Small Fence," you can do so without having to remove any fences you already have installed.
● Added a questline from which you can learn about Farming and can obtain one Fence that does not require Contribution points.
- Added "Know Anything About Farming?" that can be accepted from the NPC "Valentine's Apprentice" Liana with a Lv. 20 or higher character.
- You can obtain "Finto's Strong Fence" as the reward upon completing all the consecutive quests in the questline.
※ Finto's Strong Fence has the same effect as a regular "Strong Fence," which means you can install up to 10. (Installable number of grids: 10)
● Added a new quest that allows you to exchange "Martina Finto's Strong Fence" for "Klau's Old Moon Fence."
- Added "New Fence, Worn Fence" that you can accept from "Old Moon Guild Manager" Klau with a Farming Master 1 or higher character.
Hand over three "Mysterious Seeds," and two Gold Bar 100G, and one "Martina Finto's Strong Fence," to get one Klau's Old Moon Fence as a reward.
※ "Klau's Old Moon Fence" has the same effect as an "Old Moon Fence," which means you can install up to 10. (Installable number of grids: 10)
● Increased the number of the following "Wild" monsters for Hunting by about 20%.
- Calpheon: Giant Boar, Giant Elk, Giant Wolf, Giant Fox
- Valencia: Giant Lioness, Giant Lion
- Drieghan: Drieghan Male Goat, Drieghan Female Goat, Llama, Yak
- Kamasylvia: Gazelle, Feather Wolf, Ferrica, Ferrina
- Narcion: Grass Rhino, Verdure Buck, Verdure Doe, Shadow Wolf, Shadow Lion

● Changed the vegetable ingredient used for the following dish and improved it to be consumed in equal proportions to the other vegetables.
- Steamed Prawn dishes: Paprika → Cabbage
● Improved the following items to be used to craft [Event] Immortal: items via Simple Alchemy with [Event] Corrupt Oil of Immortality.
- Armor Draught
- Perfume of Charm
● Added information to the item descriptions of the following items that they can be used to awaken Mythical Horses.
- Flower of Oblivion, Royal Fern Root, Mythical Powder, Old Moon Censer, and Old Moon Censer Mold
● Changed "Horse EXP Increase" to "Mount EXP Increase" to the description text displayed on the following item descriptions and buff icons.
- Elixir of Training, Celerity Draught, and Stonetail Wind's Meal
● Added the text, "You can find information regarding the combat types of each class by going to Combat Type on the bottom of the Basic tab under My Information (P)" to six of the artifacts categorized into melee, ranged, and magic.
● Added information on the usage of Flower of Oblivion on the notification text displayed when doing Imperial Horse Delivery.
● Removed the duplicate text on the item description for Mount Brand Spell Stone.
● Changed Marsh's Artifact - Extra Damage to Monsters to Marsh's Artifact - Extra AP Against Monsters to match the item effect.
● Increased the lower limit prices of the following items. These items were sold by NPC Vendors at a price below the lower limit price being sold on the Central Market (including commission).
※ Due to this change, orders and placed orders on the Central Market were cancelled for the following items, which were sent to your Warehouse.
- Bear Hide Carpet
- Stuffed Fox Head
- Stuffed Weasel
- Jack-O'-Lantern Ornament
- Halberd of the Swamp Ornament
- Scrapper's Gloves Ornament
- Stuffed Elk Head
● Changed so that you can no longer sell Cron Stones at Shops.

● Improved the motion after Leap (SPACE) to be more natural while mounted on Tier 1 to 8 horses, Dream Horses, and Mythical Horses.
● Fixed the issue where your horse's Charge, Fore Chop, and Hind Kick skills couldn't be used in swamps such as the Catfishman Camp and habitats of Swamp Nagas and Swamp Fogans, and Tshira Ruins, etc. or shallow waters.

● Completely sealed the castle gates so that you can't go up the Cron Castle Spire. The remnants were also cleaned up.

● Added a feature that automatically aligns items on the Central Market Warehouse.
- You can not only use the Auto Arrange function but also sort by Item Grade, Enhancement Level, Weight (LT), Capacity (VT), and Gear Slot in Descending and Ascending orders. 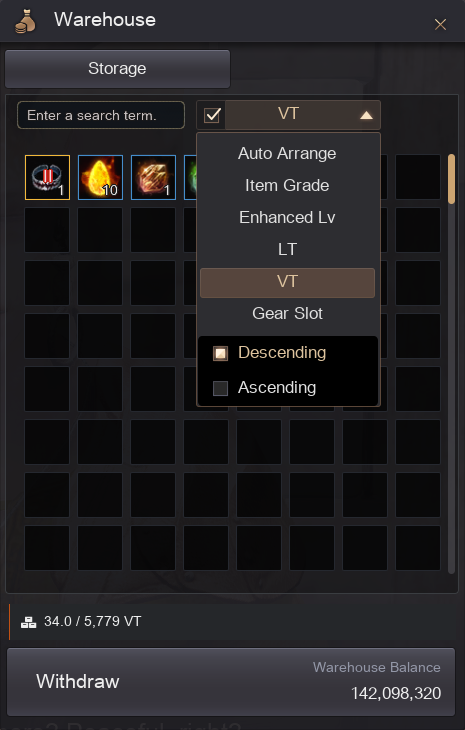 ● Changed so that the text that is displayed when the person has either rejected your party, platoon, Yar!, and Arena of Arsha invites or in case of failed invites to read more clearly.

Improved to not display certain features such as invites, notifications, etc. in Privacy Mode to be more suitable for the mode.
● Changed the design of the End Game UI to the image of the rebooted Musa.
- The colors of the texts on the End Game UI were changed accordingly. 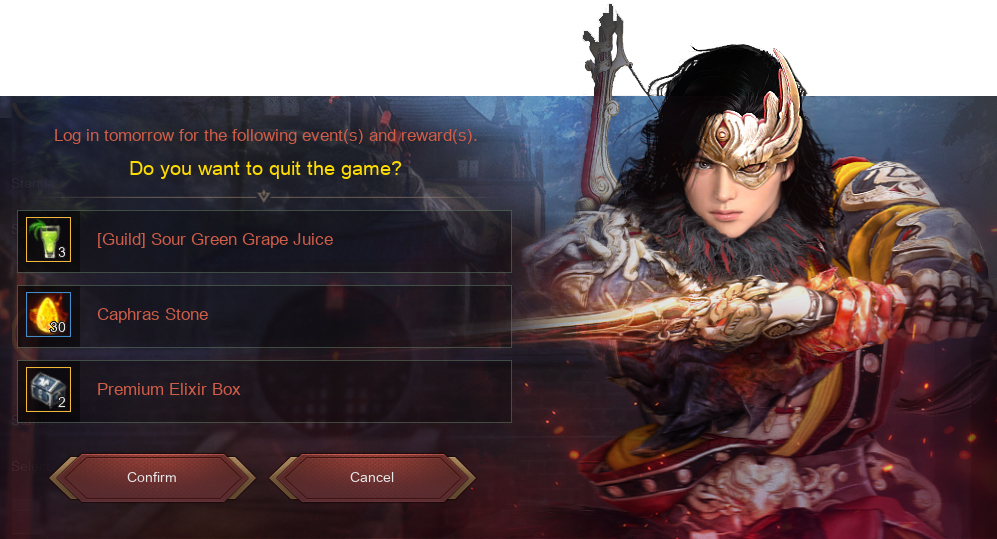 ● Strengthened the security of Setting Archive.