Here are the updates made to Black Desert on September 7, 2022.

(Patch size: approx. ?.? MB)
- Please note that the update for Steam may be larger than the size listed above.

Event 4. Fall is back in focus!

With this update, we added the "Traveler's Horse," a time-limited rideable horse we previous introduced as the "Untamed Horse." If you don't have a horse taken out and/or have checked in your horse in the stable, you will be able to borrow the Traveler’s Horse by talking to a Stable Keeper NPC in town. This horse has the Start Accel, Sprint, Drift, and Instant Accel skills, and you won't have to return the horse as it will return by itself to the nearest stabel when you dismount. We hope that all of our Adventurers, both veteran and new, will find this newly added mount useful in their travels.

● The Old Moon Guild, who manages all the stables in Black Desert, has added the "Traveler's Horse" to the Stable Keepers in town for the sake of Adventurers' ease of travel. 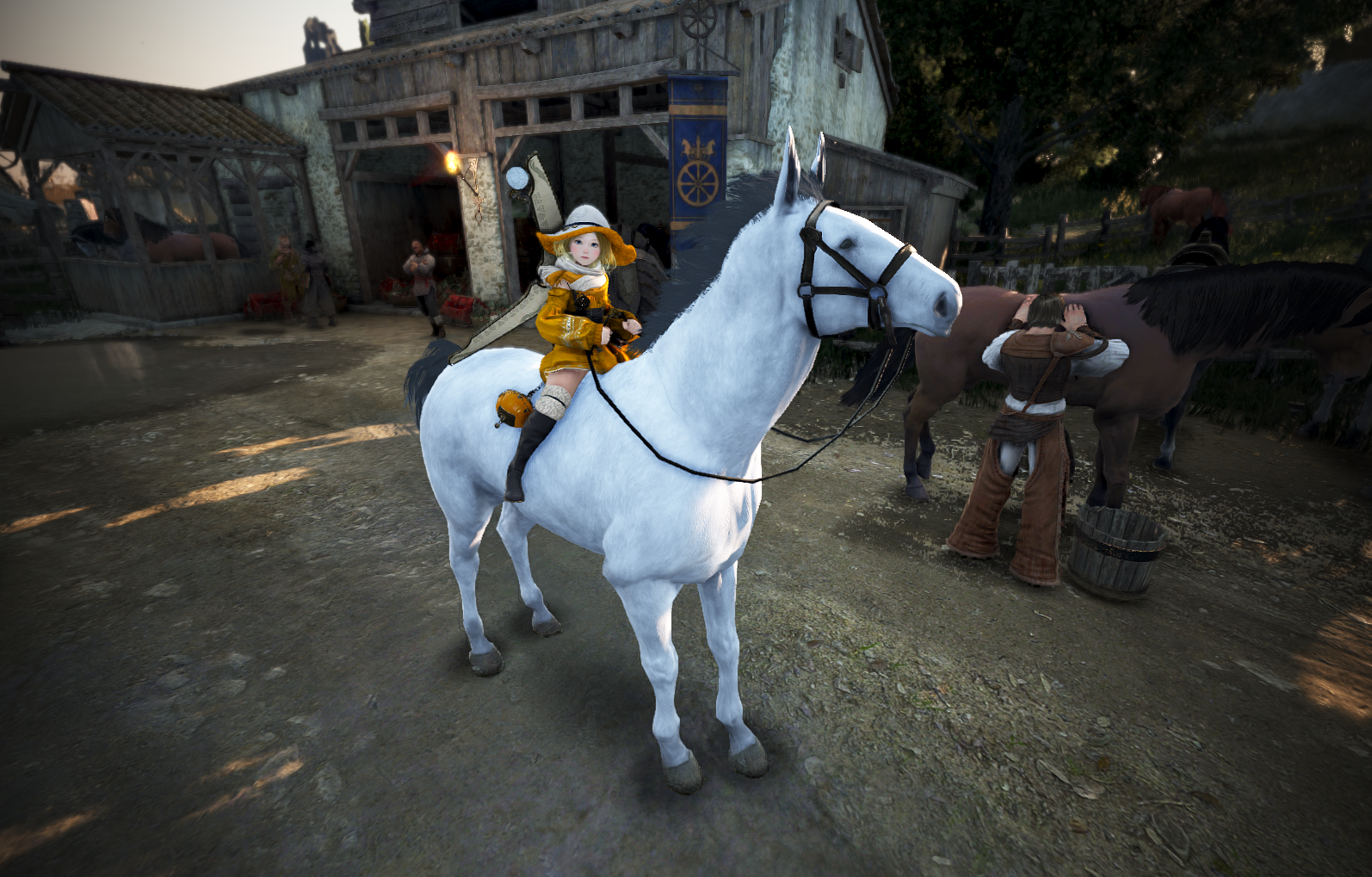 ● You can borrow a Traveler's Horse by talking to the following Stable Keepers:

● Improved so the character's appearance changes smoothly in the Skill Demo window.

| MAEHWA
Awakening
● Frost Pillars
- Fixed the issue where combos weren't performed smoothly upon learning the Core version of the skill.

We've improved on the damage, effects, and combos for Kunai Stab in Succession. Now the Fatal Blow - Flow: Fatal Blow Combo - Kunai Stab combo will be more efficient thanks to the added Stamina recovery effect, making it more viable in PvE. In addition, we added command inputs to Prime: Shackles, making it easier to combo into the skill.

● Prime: Shackles
- Changed the skill's motions, along with the following:
* Unified the skill's attack area to the widest area.
* Changed so the distance at which the skills attacks are applied has been narrowed so that all attacks are applied faster.
- Improved so you can press SHIFT + C in idle stance to activate the skill.
- Improved to combo more smoothly into Shadow Explosion and Shadow Clone.
- Improved to combo more smoothly after Prime: Ankle Cutter, Prime: Fox Claw, Prime: Shadow Explosion, or Prime: Shadow Clone.

| NINJA
Awakening
● Ninjutsu: Block Jump
- Fixed so the "Please try again in a few moment" message no longer pops up after using the skill.

| WITCH
● Trembling Thunder
- Fixed the description regarding the Bound on hits effect.

● Sunfall
- Fixed the issue of the skill demo not playing.

| GUARDIAN
Awakening
● God Incinerator
- Fixed the issue of the AP Increase buff being applied slowly after comboing into Fireborne Rupture.

Just as Awakening Drakania's uniqueness becomes more apparent the better you become at utilizing the correct skill at the right moment, we decided to implement both big and small improvements to her combos. Also, to reduce some of her clunkiness, we increased the activation speed and attack area of certain Dragonblood skills.
Succession
● Prime: Dragon's Fury
- Fixed the skill description.

● Hexeblood: Sundering Roar
- Improved so the character attacks in the direction the camera is facing when comboing with another skill.

● Flow: Dragon Flight
- Changed Stamina cost from 250 to 100 and consumes 150 Stamina (up to 450) when continuing the skill.
* With these changes, it will cost the same amount of Stamina as before to travel the maximum distance with the skill, but will cost less Stamina if you stop before you hit the max distance.

● Hexeblood: Tip of the Scale
- Changed attack 3 to activate faster when continuing the skill.

● Hexeblood: Tectonic Slam
- Fixed so the skill activates when comboing into Doombringer during the Core version of the skill in Hexeblood.

● Dragonblood: Savage Decree
- Improved so your character will now combo in the same direction as the camera.

● Legacy: Fixed the issue of the skill not activating after switching to your trion.

● Added the following items to the item list that can be automatically used via Radiant Fairy's Continuous Care.

● Applied the following changes to better discern the "Enraged, Denial, Resolve" statues in Gyfin Rhasia Temple Underground.
- Improved the statues by adding special patterns so you can identify the nature of each statue before they become awakened.
- Changed the icon of the buff that can be obtained after defeating Enraged, Denial, or Resolve statues.

- Changed the icon of the Lost Civilization's Ruin buff that can be obtained after defeating the Butcher of Gyfin Rhasia.

● Fixed the issue of Incarnation of Corruption monster not spawning again sometimes after it disappears.

● Fixed the issue of a specific monster of [Eliva] Quint Hill spawning in a weird spot.

● Improved the quest requirement for "Abelin's Secret Fishing."
Abelin in Velia says there's no better way to test the performance of a fishing rod than by comparing it to any other rod in action. Equip any fishing rod of your choice and catch some rare fish.
* Before: Equip Terrmian Fishing Rod. After: Equip any of the following +0 to +10 enhanced fishing rods.
* However, Lando's Fishing Rod Quest/Event fishing rods are exempt.

● Fixed the issue where "The Jovial Dwarf," a quest unavailable for certain characters, would remain unaccepted in the Quest window.

● Fixed so the knowledge image for "Chimera" and "Horn" items match the actual monster's appearance.

● Added a new skill to Big Hwachas available in 3 to 4 Tier Node Wars and Conquest Wars.
- You can now rapidly fire arrows over a large area four times.
* This will consume 4 Big Hwacha arrows.
- The cooldown lasts for approx. 10 seconds.

● Decreased the overall number of rabbits scattered in Drieghan.

● Improved some lines of NPC Rao in the Blood Wolf Settlement.

● Fixed the issue of the screen being too bright for a specific effect during the prologue.

● Fixed the issue of the character moving where you couldn't pass in Gyfin Rhasia Temple Underground.

We decided to clean up the buff icon UI by unifying certain buffs, like "church buffs" which displayed 2 or more buff icons, in a similar manner as we did with campsite buffs. We will continue looking at ways to improve the buff icon UI, particularly the feedback given to us by many Adventurers on unifying buffs that grant similar effects. Additionally, we improved the buff icons of buffs, like the one for "Book of Combat", to be more intuitive.
● Improved buffs that took up 2 or more icons to now only take up 1.
- Added new buff icons and tooltip descriptions.

- Improved the buff description and changed the buff icon that can be obtained by using Book of Combat/Book of Life to an item icon.

● Improved so that description regarding Contribution Lv. / Points displays the same in My Information. 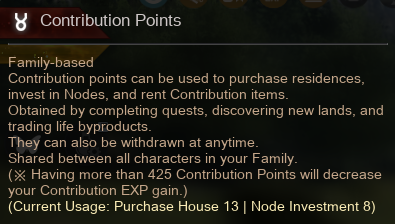 ● Fixed the issue where your Chat Group would change from "Hall of Adventurers: Drakania" to "Heidel's Street" when reconnecting to the game.

● Added a button to hide Maids/Butlers from your residence.

● Improved the inventory to now display a detailed message when you aren't able to move certain items from their current inventory slot.
- The notification will appear in instances when using Processing (L), the Pet UI, the Auto Arrange function in your Inventory, etc.