Hello, Adventurers.
This is The MMORPG, Black Desert.

● Confessing our Love with Tulips!

● The new AP and DP calibrations have been added to the Tier 1 Node War in order to introduce better combat environment.

- Tier 1 Node can be a 'goal to achieve' for new guilds. The new max AP and DP calibrations have been added in order to make it more accessible for newer guilds. We hope this change will make Node War more exciting and fun with more involved Adventurers.

- This new system has been first introduced in Global Lab as of February 28th, and we have divided Tier 1 Nodes into several segments. Now Tier 1 Nodes will be divided into Easy, Medium and Hard and different amount of Max AP and DP will be applied to each difficulty level.

- The Max AP and DP restriction is applied to every PvP moves including basic attacks, normal/awakening skills and summoned creatures but not applicable to Mounts such as Horse, Elephant and Siege Weapons such as Hwacha and Cannons. Damage reduction rate will be calculated without taking in the DP calibrations into account.

※ We truly appreciate for your participation of the last Node War survey between Feb 13th to 20th. We'd like to continue to reflect Adventurers feedback in order to make better Node Wars with more fun.

- Maximum AP and DP restriction is applied to every Adventurers within the area where Node War is in progress.

● The amount of Node War individual rewards, Shining Medal of Honor, increased for the wins for each tier. Also, adventurers in the top 5% in regards to Contribution will receive more medals depending on the tiers.

- Adventurers who are a part of a guild and join a Node War can obtain the Shining Medal of Honor by clicking on the rewards button after a Node War has ended. (The Node War in which the guild has participated must end in order for the adventurer to receive the rewards.)

- Adventurers who do not accept the rewards after the end of a Node War cannot participate in the next Node War.

- The number of medals you can obtain are like the following.

● Fixed the issue where the game often ended when registering a maid.

● Bonus AP/damage reduction effect that can be obtained for completing an Adventure Log or reaching Lv.56 and Lv.60 will now be properly applied to AP/DP increase effect that is activated when reaching certain level of spec.

● Fixed the issue where the target getting hit by the additional hit of the  Ultimate: Frenzied Destroyer skill would receive a melee AP buff as well.

● The hitting effect for the [Combat] Trina Demolition Axe has been changed to reflect the direction of the hit.

● Fixed the issue where the item could not be sold when the item price was higher than the amount of silver you owned.

● Adjusted the difficulty level of Dastard Bheg appearing from quests due to the renewal of the beginning quests.

● The monsters near NPC Beedle have been relocated in order to ensure easy interaction with the NPC when going through the quest, 'Finding a Way Out'.

● The number of Steel Imps in front of the Western Guard Camp has increased due to the renewal of the beginning quests.

● Removed death penalty upon summoned fireball by Giath which appears from Dark Rift.

● After obtaining loot below from defeating boss monsters, you can now properly exchange the loot through NPC's at the Western Guard Camp.

● You can check the location of the NPC's by right-clicking on the items.

● Fixed the issue where trees would occasionally look abnormal.

● The conditions for interacting with the following NPC's at Kamasylvia have been removed.

● Fixed the issue where the HP Potion(Beginner) could be obtained continuously from Common Rack.

● The beginning stages of the main quests have been revamped.

- The quests and balance of the monsters for the initial quests have been changed so that adventurers who are new to the Black Desert world can enjoy the growth of their characters.

- New characters will now begin near the Ancient Stone Chamber instead of the Western Guard Camp and therefore, the overall mood of the excavation site has become more vivid.

- The pack of the gray wolves near the Western Guard Camp has been relocated to the right side of the Ancient Stone Chamber. 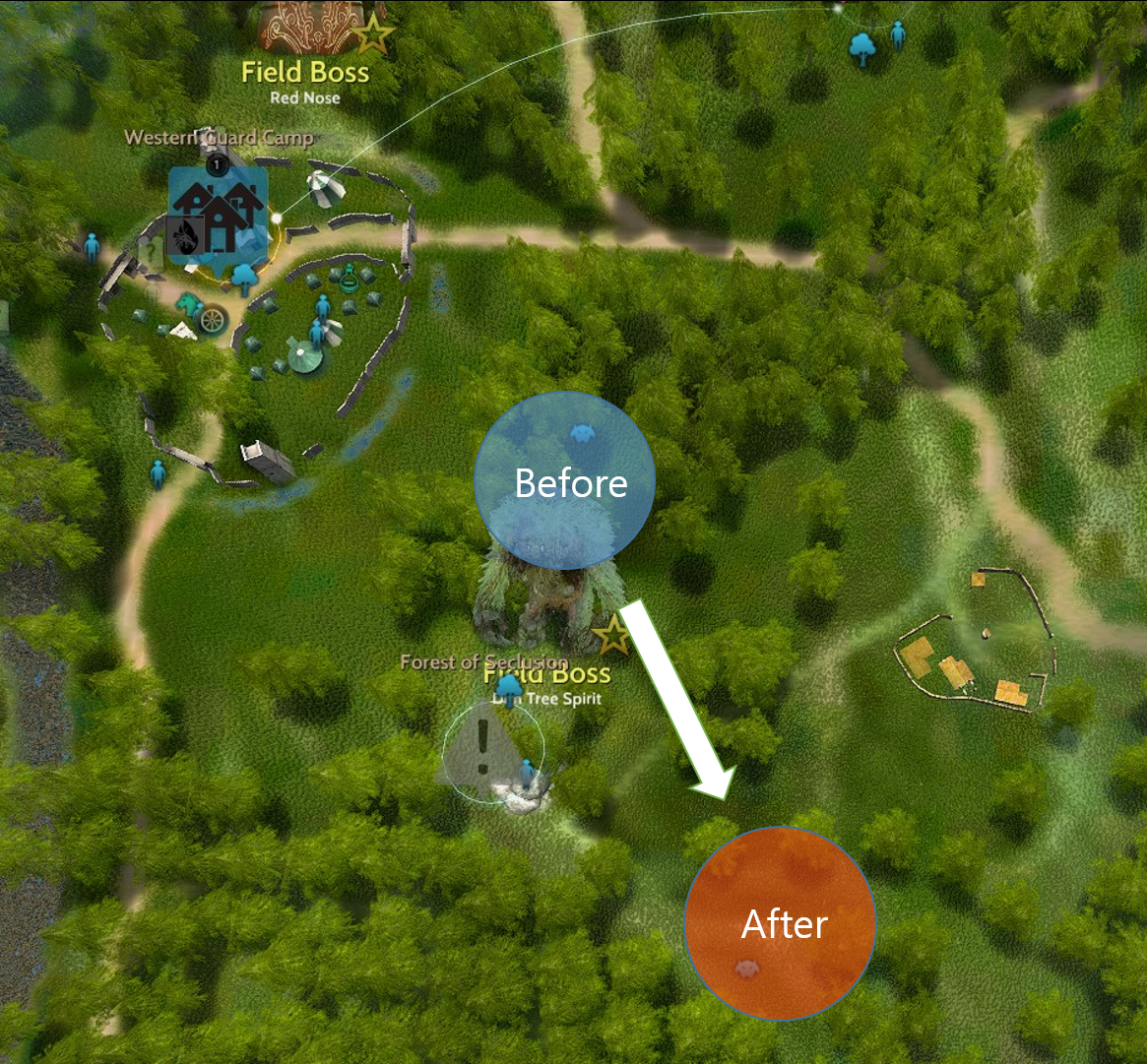 - Once new characters reach the Western Guard Camp, the characters will go through the same main quests as before.

- Due to these changes, the difficulty level of monsters appearing during the quests for the Balenos area has been adjusted.

- Number of HP Potions(Small) given to Adventurers before they reach Velia has been increased a bit.

- Characters who were going through the previous main quests cannot go through these revamped quests. Instead, they will continue with their current quests.

● Characters going through the renewed quests can obtain knowledge through the following quests.

* You can receive the relevant quests through Igor Bartali right before you go to Heidel from Velia while going through the main quests.

* Characters who begin their adventures from the Western Guard Camp (not the Ancient Stone Chamber) cannot accept the quests above.

● The auto-navigate for "The Isolated Supply Route" quest has been changed to navigate you to where the Gray Wolves are located.

● Fixed an unnatural description for the knowledge for "A Spineless Strategy".

● Improvements have been made so that Adventurers will now be given with various rewards for gear enhancement and character growth upon completion of Valencia Part I (Main Quest).

● Changed that 'The Delphe Knights in Chaos' quest can now be accepted by spawning Black Spirit after completing 'The Securing of Safe Passage' during the Main Quest of crossroad quests [III].

● Fixed the issue where 'No Longer Human' quest could be accepted continuously even after completing 'Finding Clues' quest.

● Fixed the issue where the quest 'The Story of the Hero Borne Upon the Winds' which cannot be accepted during the Main Quest will no longer be displayed on the quest widget.

● [Central Market] Fixed the issue where a notification would not be displayed when registering pearl items at a higher price than the set price at the Central Market.

● [Central Market] The Desired Purchase Price and Set Price will now stand out more conspicuously within the price list of the Purchase and Sell window at the Central Market.

● [Central Market] Changed that the description which appears when collecting all for sold items and when registering items will now show whether the Value Pack buff is applied or not.

● [Shadow Arena] The records within the Accomplishments tab of My Information (P) while in Shadow Arena will no longer reset.

● [Shadow Arena] Fixed the issue where the minimize and close buttons would not function when playing in windowed mode.

- Added a feature which shows you the skill descriptions of your current skills in Shadow Arena when you press the [ALT] key.

● [Shadow Arena] The size of the time UI at the bottom of the Shadow Arena map has been adjusted.

● [Shadow Arena] The Shadow Arena rankings window has improved so that you can see rankings by season.

● Improvements have been made to the Adventure Journal within the ESC menu.

- Added a sound effect which plays when you open the ESC menu's Adventure Journal.

- When you close and then re-open the ESC menu's Adventure Journal, the recently selected bookshelf will now appear.

- Certain parts of the Black Spirit's Safe has been re-designed.

- The number of rewards you can receive will now be displayed beneath the Black Spirit's Safe.

- The icon on the bottom right which used to show the total number of items will now show the number of rewards.

● Fixed the issue where the size of the quest icons above NPC heads would appear abnormal.

● The borders of the quest icon above the NPC heads will now change color depending on the type and progress of the quests.

● Added descriptions about Horoscopes when selecting Horoscopes in the character creation process.

● The character introduction clips which are displayed when creating characters will now show the Awakening clips first.

● Due to the change in the location of where new characters begin, the contents and location of the tutorial has also changed.

● Fixed the issue where certain parts of the Horse portraits were abnormal.

● Adjusted the sizes of the exp graphs, weight, stamina and HP which appear when you press the Mount list at the Stable in the World Map.

● Added a feature in the Mount list (from the Stable at the World Map) which shows the amount of time remaining for Breeding.

● Fixed the issue where workers purchased from the NPC Amity and then registered at the Worker Exchange would appear as if Promotion was available.

● Added a description button at the bottom right of the Breeding Market and Horse Market windows which can be seen through the Stable menu.

● The Pearl Inventory will open by default for outfit extractions.

● Fixed the issue where the underwear button beneath the equipment window would not be displayed when you enter and then leave the equipment repair screen.

● Due to the removal of the limits to the amount of Silver you can possess, you can now select where to receive your Silver when you sell items worth more than 500,000 Silver at NPC's.

● Fixed the issue where the amount of silvers is displayed abnormally when collecting wage on the Guild Window(G).

● Fixed the issue where the weight and quantity restriction for moving items a through a Transaction Maid  is not applied when items are stored in the first slot in the Warehouse.

● Fixed the issue where the translated language is not correctly displayed under the skill description in Shadow Arena.

● Central Market has been improved so that the items which often disappear due to network issues when registering or selling will now be restored in your inventory.

● Waiting time has been reduced when you failed moving items from Inventory & Storage to Warehouse or vice versa.

- However, if you fail moving items due to the VT restriction or temporary disconnection from Central Market will still require the same amount of waiting time.

View list
Comments 5
Etoile
Lv. 15
Please fix the crash that happens whenever someone try to __create a new character.
Akain
Lv. 57
We’d like to announce the updates made to the Black Desert as of 2019, March 6th. <--- 20 no ?
oh god we back in time or it a copy past (just messing with you)

Yılanı
Lv. 61
It look likes a high school project with wrong copy pastes lol :)
Yılanı
Lv. 61
Also it writes %20 discount on costumes and there is no discount when you press f3 on costumes this is how gms take serious on mena servers.. very dissapointing management here..