These are the updates made to Black Desert on February 19, 2020.

- You can accept the quest "[Lahn Succession] Pondering on Death" from Black Spirit after completing the awakening quests.

- The succession quest can also be found in "Quests" (O) under the "Suggestions" tab.

- You will learn the skill "Heavenly Waltz" through the succession quests. It enables you to be even more powerful with your Crescent Pendulum and Noble Sword.

- You cannot use the Crimson Glaives after completing Succession.

- Skills in the Succession tab are affected by the AP of your main weapons and awakening weapons.

- You can use the skills both in the "Main" tab and the skills in the "Succession" tab at the same time.

- Skill add-ons for awakening will reset when you learn Succession skills and vice versa.

- You can change from Succession to Awakening by resetting your skills to unlearn the skill "Heavenly Waltz".

- You can change from Awakening to Succession by resetting your skills to learn the skill "Heavenly Waltz".

- Made the relationships between characters and groups clearer to develop the worldviews in Black Desert.

- Start the renewed Kamasylvia main questline by accepting the quest "Kamasylvia, the Land Behind the Veil" from Black Spirit in "Main Quest".

- Characters must be level 58 or higher to accept the renewed Kamasylvia main questline.

- The quest can easily be found by going to Quest List (O) window > Main Quest tab > [Lv. 58 Kamasylvia] The Light of Kamasylve.

- Characters must be level 58 or higher and have completed the quest "Healing Light" in the renewed Kamasylvia questline to accept this quest. Find the Papu giving water to the flower garden in Grána plaza.

- Quest preference type "Combat" must be active to accept this quest.

> Added Tier 6 wild horses to appear across the world of Black Desert.

- The tier 6 wild horses will be given a level randomly between 1-10, like the pre-existing tier 1 to 5 wild horses.

● Added the "Use Coupon" function in the new menu under the Adventurer Support category. 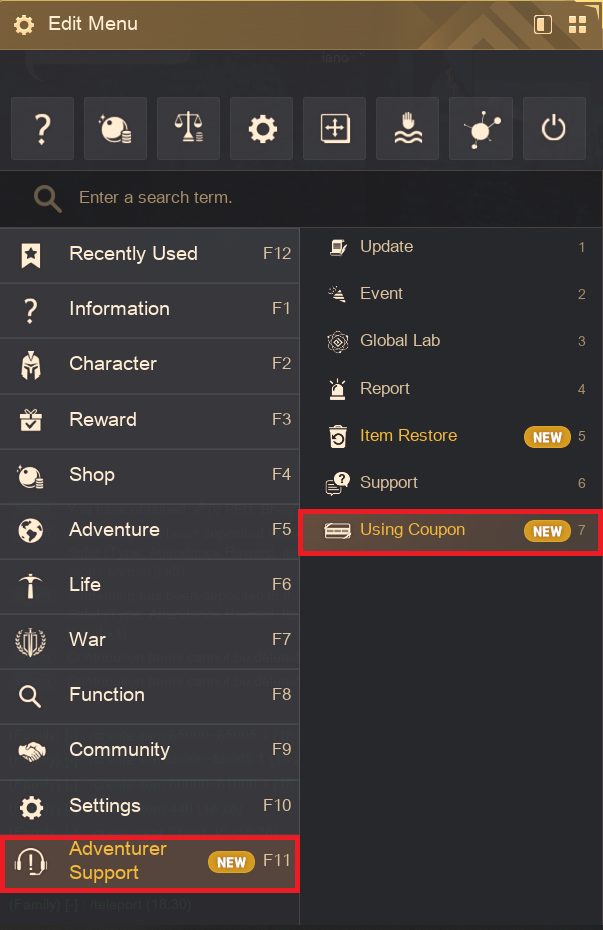 - Now you will be able to register coupons in the game.

● Increased the casting speed of the following skills:

- After the additional hit of Prime: Lightning

- After using Prime: Earth's Response: Destruction to the RMB

● Changed the preceding skill to Succession: Elemental Revelation for the following skills:

● Teleport - Fixed the issue where Succession skills could not be used without their casting motion when the skill was used by using a quick slot.

- Bound to family when used initially, can be used via Storage. "

- Adventurers who are Guild Quartermasters or higher can purchase [Guild] Cannonball and/or [Guild] Flame Cannonball with 200,000 Silver of the guild funds via the Guild Military Supply Manager."

- Crafting methods were not changed

● Fixed the issue of incorrect number of rations being used instead of the amount listed in the description while using the BreezySail skill on Big Ships.

● Fixed A Poacher's Suggestion alerts to only appear in the Kamasylvia regions.

- Can use number keys 1~8 starting from the left as Quick Slot keys.

- Added text "This skill is at the highest level your fairy can learn" to the Fairy Skill description.

- Clicking the appropriate banner will transition to the (New)menu.

● Improved the Pearl Shop (F3) quick purchase to allow for changing number of items not instantly used with the +,- buttons.

● Fixed the issue of the location of the Set Allowances button appearing irregular when scrolling down while having selected a user in the War Hero tab of the Guild window.

- Inventory(I) tab → Left-click on the Throw Item Away icon to use the Item Restoration Function. 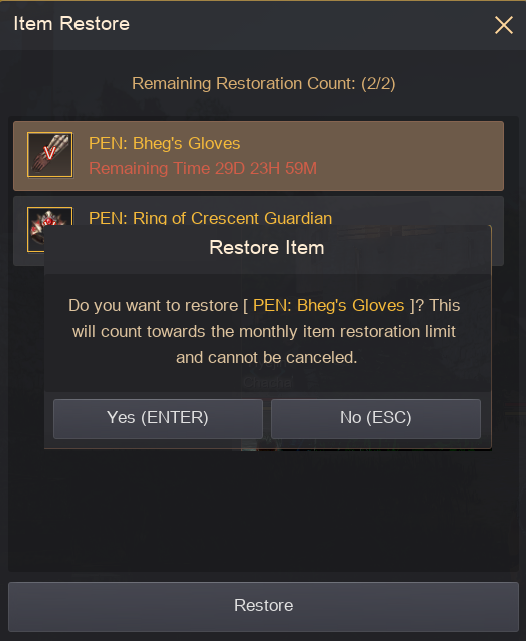 - Item restoration function can be used twice a month.

● Fixed the issue where upon changing chat type selection, the chat type icon would not disappear from time to time.

Here are notes backlogged from the December 24, 2019 and January 8, 2020 updates. We apologize for not notifying our Adventurers of these updates and for any inconvenience it may have caused.