These are the updates made to Black Desert on April 8, 2020. 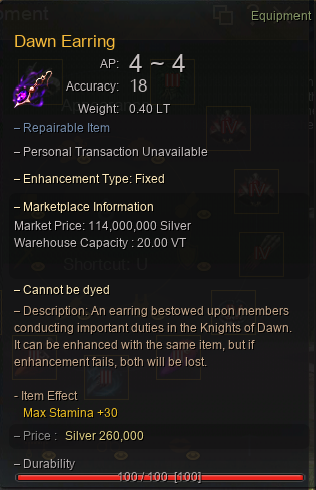 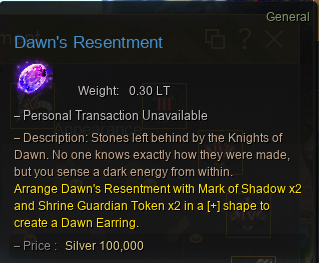 - Dawn's Resentment and Dawn Earring both have a low chance of dropping from the Calpheon Shadow Knights in the Abandoned Monastery.

- In your Inventory, place Dawn's Resentment in the center, then Marks of Shadow to its top and bottom, and Shrine Guardian Tokens to its left and right to obtain the Dawn Earring.

- Changed the Recommended AP for certain monsters beneath the Abandoned Monastery to 280.

- Stronger monsters will have the title [Blessed by Kzarka].

- Upon defeating certain monsters, up to 2 players can receive the loot and a low chance to obtain the Dawn Earring.

- These new monsters in the Abandoned Monastery share Knowledge with the existing ones.

- Approximately 2 to a maximum of 10 minutes are needed for the Dawn's Grudges to become the Specter of Belmorn.

- Dawn's Grudges that have appeared will not despawn regardless of time passed.

- When the Specter of Belmorn appears, Dawn's Grudges will no longer be created.

- Be wary of the death penalty that will be applied if you are killed by the Specter of Belmorn.

● Fixed the issue where Node/Conquest War Barricades could not be installed after setting up an Indomitable Flag.

Just as we did in the past week, we focused on balancing certain characters for today's update as well. Major updates are as follows.

First for the Warrior, we increased Reckless Blow's total damage, as well as adjusted movements during Head Chase. While the damage per hit of Reckless Blow has been reduced, we've increased the total number of hits thereby creating a better impression of inflicting greater damage. Head Chase was used by certain Adventurers (pressing Q during Head Chase) to cancel into combos, so we improved its movement to be a smoother transition to other skills so other adventurers wouldn't have to resort to using such means.

For Ranger, we focused on the capabilities of the Awakening skills. We adjusted the previously rather long cooldown times of certain skills to increase their usage, and changed the Air Smash effect of Flow: Disillusion into a Down Smash effect, adding the possibility to combo into other Down Smash skills such as Flow: Rooting. We are ongoing in our research to improve Awakening skill combos and their capabilities for the Ranger.


For Maehwa, we wanted to rectify the attack range of certain Awakening skills, as well as increase their usage. Particularly for Maehwa Awakening, there are a lot of skills which involve her moving forward to attack, of which we extended the frontal attack range of certain skills, thus improving their ease of use. Also, we changed Petal Bloom during its charging phase to combo into Sleet Steps.


Regarding Wizard, there were a lot of comments about the inconvenience due to the lack of a skill which transitioned from main weapon to awakening weapon stance. Therefore we made the Dark Flame skill transition from main weapon to awakening weapon stance, as well as allowing Water Sphere and Flow: Aqua Bomb to combo into other skills. In addition, we now made Evasion and Teleport useable during skills.


Witch Succession has the specialty of fast cast times when comboing with skills after using Magical Evasion. Here we felt that we wanted to further emphasize the uniqueness of Magical Evasion as playing the pivotal role in the Witch's survival and combos. Now whenever the Witch uses the Magical Evasion skill, we added the effect of her disappearing momentarily from all players. We wish to further make distinct the individual charm and personality of the Wizard and Witch classes, and are looking into further ideas at the moment.


For Dark Knight we also focused on her Awakening skills. First, we changed Air Strike to have the same effects in both Awakening and Succession. We changed the non-Awakening Air Strike skill's Bound effect to only apply if the first hit did not apply the Bound effect, which used to apply to all good extra hits. In addition we listened to your feedback and supplemented skills that weren't being utilized much, which included Grip of Grudge, Cluster of Despair, Trap of Vedir, among others.


We sought to supplement the somewhat frustrating movements of Striker Succession. We improved Discharge Energy to activate more smoothly for the Crimson Fang - Flow: Bombardment combo by allowing Strikers to freely choose between the two different types of Crimson Fang combos based on the situation. We also changed Prime: Wolf's Fang's attacks to be focused on the targeted enemies during use.


For Ninja, we focused on improvements for hunting convenience and speed. Therefore, we increased the damage of certain skills as well as the ability to combo with them, and changed the Drastic Measure skill to be even more powerful when used during Asura state.


We are carrying out class improvements with our research and testing based on your important feedback. We will do our best for the sake of all adventurers.

- Sleet Steps will be instantly used in the charging complete state.

- Drastic Measure will inflict the completely charged damage amount as well as the super armor effect.

- Due to the change in attack, the attack range has been reduced, and the knockback hit removed.

- Powerful entities encroached in the darkness spill out into Black Desert through the Dark Rifts.

* As the rifts expand, the following Dark Rift monsters will emerge at Very Hard difficulties.

* Upon defeating the new Dark Rift bosses of Saunil Siege Captain, Steel Nux and Kavali, you can receive an additional "Ancient Spirit Dust" instead of the "Box of the Silent Dead".

* Dark Rifts of Normal and Hard difficulties will reopen at 30% faster speeds.

● Added the "Cabin" skill for the Epheria Carrack.

- When the ship is anchored, and you are holding the ship's wheel, press Shift + E to open and close the cabin door.

- The cabin door will automatically close if you attempt to sail or move to the ship's wheel while the cabin door is still open.

- The Cabin skill can be viewed from the Mount Information window.

● Unified the size of the Enter Item Quantity windows.

– When better equipment is obtained

– When inventory weight limit is 90% or higher

– When equipment durability below 10

- When equipping [Mystic] Rakshande Cestus and [Mystic] Khamsin Clothes together