Event 1. Dreaming of the Big Catch!

● Complete the "Book of Margahan" Adventure Log with a character Lv. 60 or higher to receive the long-sealed power of "Agris Fever." 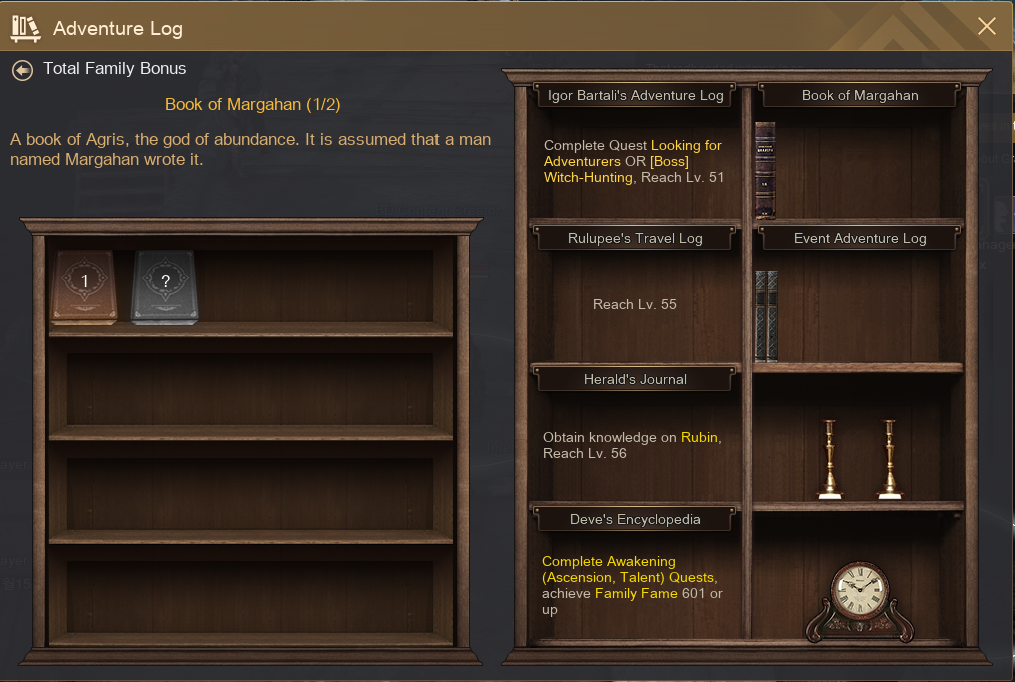 - You can obtain and complete the quest "Adventure Log: Agris, the Ancient Secret" from the Black Spirit, then talk with Edan to obtain the Book of Margahan.

- Agris Fever points are consumed differently based on the monster defeated.

- Agris Fever points are shared by all characters of the same family.

- Agris Fever points are recovered every morning at 06:00.

Agris Fever was designed for Adventurers who enjoy fighting monsters for short periods of time each day.

You can unlock the Agris Fever content by offering tribute through the Adventure Log to Agris, the Balenosian ancient god of prosperity. Regardless of whether you've logged into the game or not, you will recover a fixed amount of points every day at a given time, which will be consumed to grant a buff increasing the amount of junk item drops when defeating monsters.

Agris Fever points have a cap of 20,000, so it's best to regularly consume them as they're recovered.

You may feel that it is difficult to maintain the Agris Fever effect over a long period of time once you actually try using it out in the world. We didn't want this effect to become a necessity for defeating monsters such as already existing food, elixirs, and scrolls. We hope that Adventurers who only fight monsters for short periods per day to enjoy a more efficient playtime, as well as feel a bit more content due to slightly heavier inventory bags.

※ The amount of Agris Fever points consumed per monster can be checked on the [Agris Fever Adventurer's Guide].

- There is a chance you can obtain "Witch's Delicacy" from Cooking.

- There is a chance you can obtain "Mysterious Catalyst" from Alchemy. 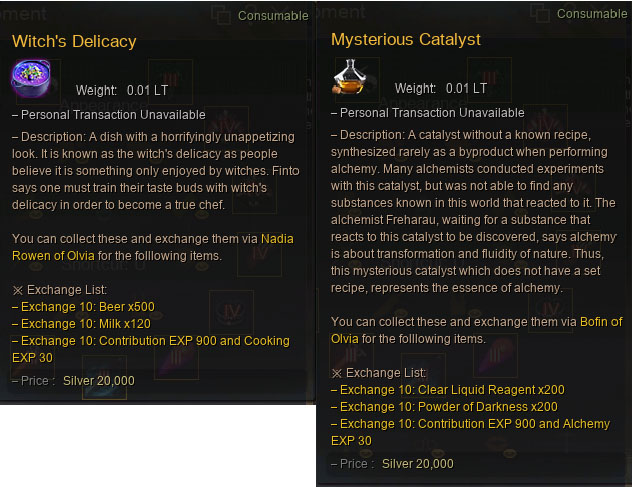 * You can exchange Witch's Delicacy for items with Nadia Rowen in Olvia.

* You can exchange Mysterious Catalyst for items with Bofin in Olvia.

- Upon defeating bosses and receiving rewards, you will also gain a buff which restores 5000 HP over 30 seconds.

Changed the Berserker to appear more intimidating during Beast Form.

- 10 sec. cooldown applied when using the skill without Heilang present.

Kunoichi Succession involves a playstyle of suppressing your foes by distracting their field of vision with quick movements and agile attack skills.

However, there were several skills that were overly effective and not in line with this playstyle, thus we lowered the PvP damage for Black Spirit: Prime: Flash Slash and other skills.

For Mystic Succession, we focused on increasing the utility of most skills, as well as reducing the pressures of Martial Spirit Shard gameplay. First, many Mystic adventurers pointed out Prime: Hidden Claw, Prime: Fist Fury and other skills as lacking the most utility, thus we listened to their feedback and made these skills more accessible to use when entering or retreating from battle. Also, it is important for the Mystic to quickly weave combos while amassing Martial Spirit Shards in the process, and due to Crouching Wolf's consumption (of Martial Spirit Shards) reported to be way excessive, we reduced the consumed amount of shards to allow for a stronger continuation of combos.

- After each Fist Fury hit

- After moving backwards with Hidden Claw

Just as adventurers sent us a variety of opinions regarding the issue, we carried out improving Lahn Awakening. There were especially a lot of requests regarding her attack speed and attack range, which we enhanced by fixing the left and right attack range of Tailspin and allowing Flow: Vice to combo into other skills. For Lahn Succession, we lowered some of the PvP damage and block effects (i.e. super armor) of her major skills accordingly. Currently Lahn Succession is exceling in a variety of PvP situations due to her maneuverability and stability, which we adjusted to be more in line with other classes. However, we changed some of the information revealed 2 weeks prior at the Black Desert Global Lab.

For Guardian Succession, we worked on the awkwardness felt between skills during combos.

Particularly, many adventurers highlighted Prime: Axe Throw as a skill lacking utility, thus we improved it by adding skills that can be comboed after its use, as well as adding the Forward Guard effect during the 1st hit to make it safer to use the skill. Also, we improved on making combos flow more smoothly especially when mixing Succession and Main Weapon skills together, thus making it feel less awkward between skills during such combos.

Tidied up the quest content for [Event] Popular Love Boat.