Event 2. Hot Time Heats Up! To the Hunting Grounds!

Event 4. Playtime UP? Rewards UP!

Event 6. The Gift of Login Rewards!

- Gather all of the following sacraments to obtain the blessing of Merindora, the eldest spirit of Kamasylvia, then collect more of the hidden relics to craft the never-failing waters of Ornette's and Odore's Spirit Essences. 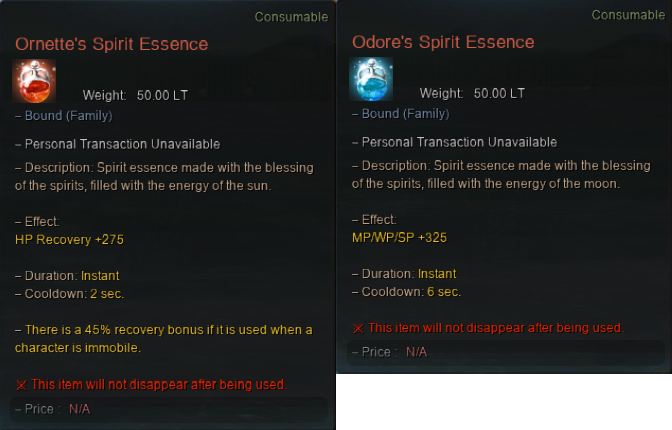 - Certain items will not disappear even after use.

It is one of the pivotal, romanticized concepts in the fantasy game genre for the adventurer to obtain a "rare item" that would especially be the source of admiration and even jealousy from their peers.

Many adventurers rose to the challenge to obtain such items like Lafi Bedmountain's Compass or the Archaeologist's Map. We agree that this process itself not only gives a sense of accomplishment and fulfillment to adventurers but can also serve as one of their larger ingame goals, which led to our decision to further add such items to the game. Yet rare items are considered special due to their rarity, so we were careful in our approach, and felt that since a good portion of adventurers had obtained the aforementioned rare items from above, this was the right time to announce these new rare items.

Such items are referred to as "treasures" within the development team, and the underlying concept for these treasures was the "inexhaustible potion."

Whether it be hunting monsters or even to enjoy any kind of game content, we hope to add further symbolically meaningful and rewarding items that simply don't just offer "silver" rewards, but can serve as long-term, ingame goals as well as simply being fun items to acquire. Of course, we will attempt to curb the difficulty level accordingly as well. 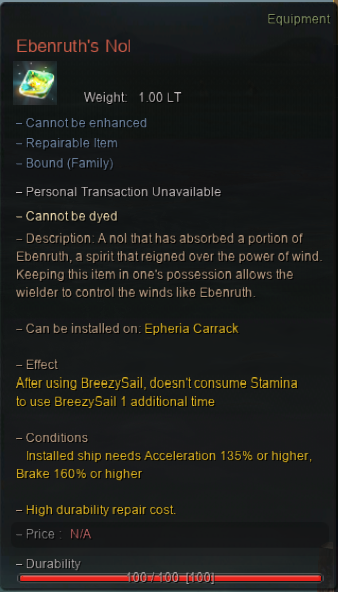 - You can obtain Ebenruth's Nol by combining Ebenruth and Symbol-Engraved Nol in your Inventory (I).

- You can obtain Symbol-Engraved Nol from a Treasure Chest of a Sailor.

- You can purchase Oquilla's Tear from the Crow Coin shop, and you can obtain Oquilla's Flowers by chance when Bartering and from a Treasure Chest of a Sailor.

- You can remove the moss from the Moss-Covered Map with Ravinia's Moss Remover, which can be purchasable from Crow Coin shops.

- You can obtain the Symbol-Engraved Nol, an ingredient to make Ebenruth's Nol, as well as other valuable items from the Treasure Chest of a Sailor.

● Added 4 new types of items only available at the Crow Coin shop.

When sailors first discovered the "Symbol-Engraved Nol," they regarded it as mere rocks broken from ancient ruins.

Yet one adventurer who was navigating the seas with a map discovered within the belly of a saltwater crocodile was heard to have finally have identified the truth behind this strange and mysterious fragment.

Rumor has it that this adventurer's boat was swept away by winds so strong it seemed the ship was sliding over the waters as if on ice as it disappeared into the horizon.

● If there's a change in Bartering items due to factors such as server maintenance, the Bartering Information window will reset. 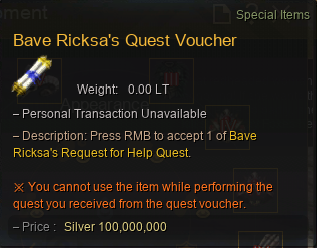 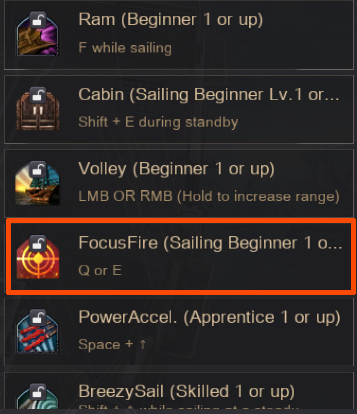 The current method of firing cannons is basically the longer you press the farther it shoots, yet it is rather difficult to accurately hit objects that are far away. To aim a bit more accurately and easily, we prepared the FocusFire system.

Together with a capable crew, adventurers will be able to fire their cannons and hit targets floating on unruly waves with utmost precision.

- You can fire faster and farther in FocusFire mode without having to necessarily hold down the LMB or RMB.

- You can use FocusFire while using other skills on your ship, except for during the Ram skill.

- You can change to the Left or Right portside with Q or E, respectively, while in FocusFire mode.

- The "Ram" skill's hotkey has been changed from "Q" to "F" accordingly.

- Thus, even if you've fired either the left or right portside cannons first and they're on cooldown, you can still fire the guns on the other portside.

- However, if in FocusFire Mode, you can only fire the cannons of the portside you are currently in. 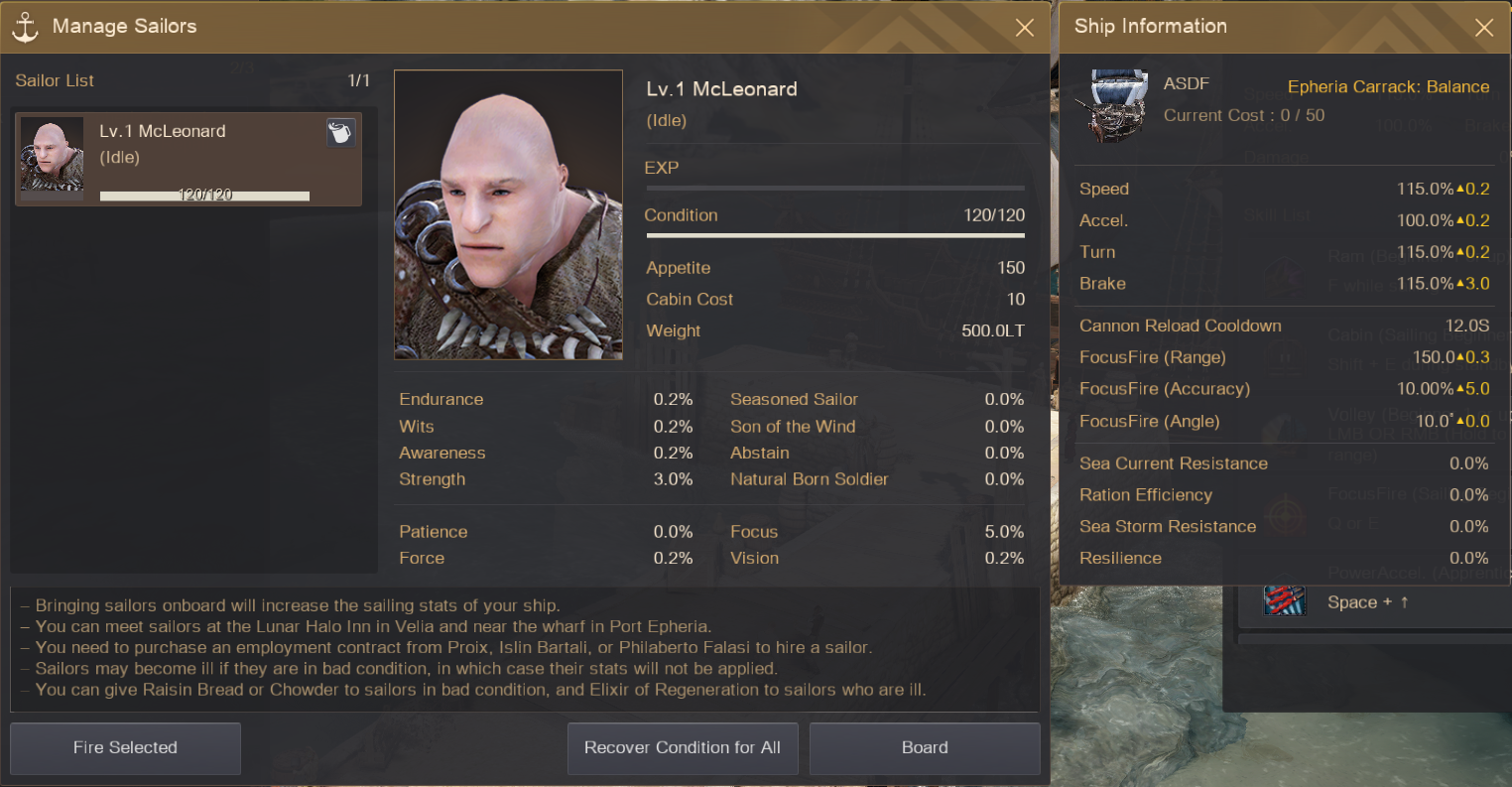 - The next reset for Total Likes of Chat Groups will be approx. 3 months later on July 22 (Wed.).

※ The Garnier Troupe chat group Titles will be obtainable in the next relevant content update.

- Changed the Forward Guard effect to Super Armor effect while Charging (from the beginning of the casting animation until the end of the attack).

- Changed the skill to no longer recover Stamina during use.

- However, the total number of necessary Caphras Stones for up to enhancement level 10 is the same as live.

- For Dim Tree Spirit's Armor, the total number of Caphras Stones required for Caphras Enhancement level 10 is 8,260 stones, which is the same as the amount required in live.

- The following quests can be re-acquired 24 hours after completion, and can be found under "Other" quests.

Originally this quest allowed for adventurers who achieved Awakening to freely reset their skill points by being awarded with Armstrong's Skill Guide. However, with the introduction of Succession and a whole wider range of skills to experiment with and choose from, we had adjusted the level limit to reset skills freely from level 55 to 56. Therefore, to allow adventurers to freely carry out further skill resets after level 57, we decided to change the required level for this quest.

(However, previous kills do not count towards the new Title requirements.)

- The quest to obtain this bundle is given by the Black Spirit upon completing Mediah Main Quest "Apocalyptic Prophecy."

Changed certain backgrounds of battlefields where the Red Battlefield is taking place.