This is just the beginning!

The Season Server for Season Characters is now open!

Only Season Characters can enter a Season Server, and you can only create 1 Season Character per Family at a time. Unlike normal servers, the season server always has Combat EXP +100% and Skill EXP +20% buffs active for faster leveling.

What’s different about the Season Server?

Season quests are daily quests that can be accepted from Fughar. By fulfilling each daily quest’s objectives (such as gathering successfully, using certain items, obtaining knowledge, etc.), and completing all of them, you’ll see yourself become a more accomplished Adventurer than from when you first started Black Desert. 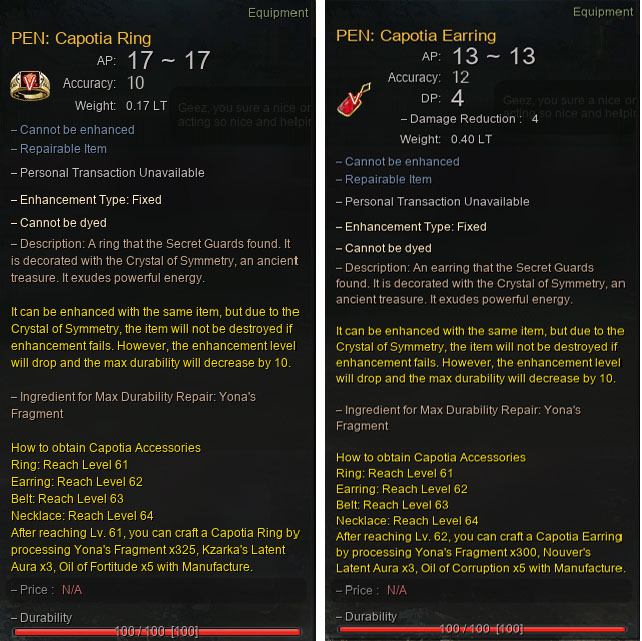 PEN (V) Capotia accessories are similar in stats to yellow-grade TET (VI) accessories, so we really recommend that you complete all 40 days of quests to get it!

By completing Fughar’s daily quests or going to Fughar equipped with TRI (III)/TET (IV) Tuvala gear, you can get items to boost your chances at successful enhancements.

※ The Advice of Valks can only be obtained during the Season Server period, so make sure go to Fughar and get them before the end of the season!

Upon completing the main quests for Balenos, Serendia, Calpheon, and Mediah, it’s time to go look for Fughar.

Why? Because he’ll give you the “Secret Book of the Misty Breeze” as a reward, which grants you tons of skill EXP to help you learn new skills or level up the skills you’re already using.

Having trouble figuring out where to go next in your adventure? Just follow the main quest! 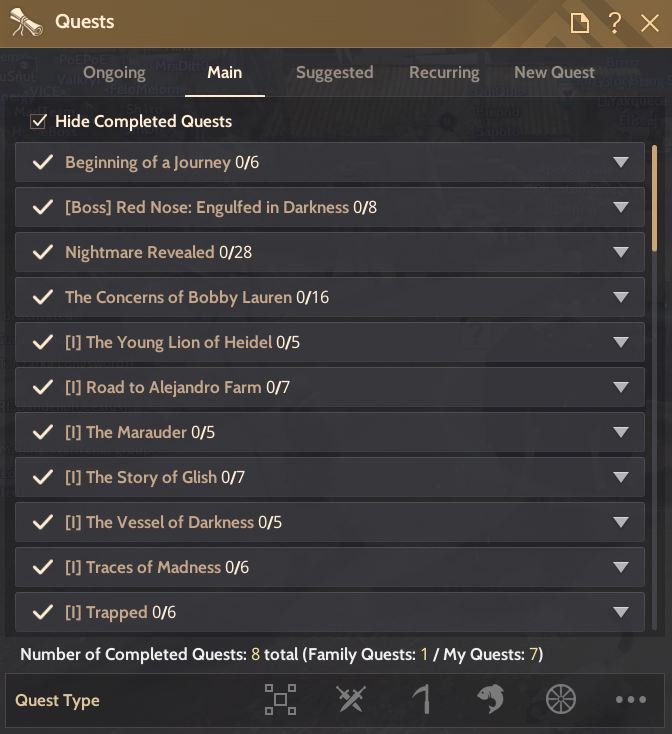 If you’re not sure where to go next in your Black Desert adventure, we recommend completing the main quest of each territory with the Black Spirit! Progressing through the main quest gives you Contribution points, Knowledge, and Skill EXP that’ll help you in your future adventures.

* The Summer Season Challenge completion rewards and additional Black Spirit Pass rewards can only be received once per Family.

* The standard completion rewards and additional Black Spirit Pass rewards can only be received during the summer season period, so please make sure to receive them within the season period or else you won’t be able to get them once it ends.

* The previous goal must be completed first before being able to complete the next goal.

* Please refer to the in-game description of each item for more details regarding them. 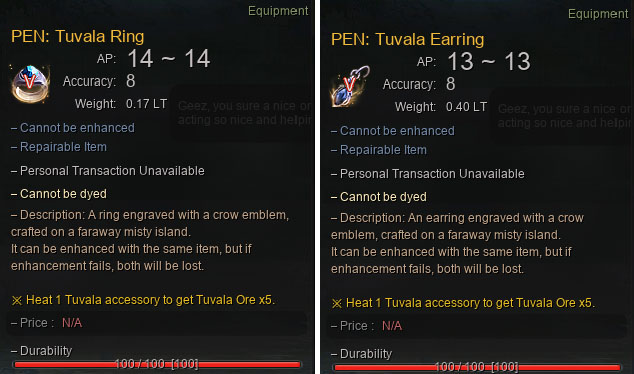 After reaching Lv. 60 and Lv. 61, you can receive a PEN (V) Tuvala accessory as a reward from Challenge (Y).

Check out our recommend spots if you need Tuvala gear exclusive materials~!

For hunting grounds after Mediah, you can obtain materials exclusive for Tuvala gear by defeating monsters. If you want to focus on enhancing Tuvala gear, make sure to check out the map below! 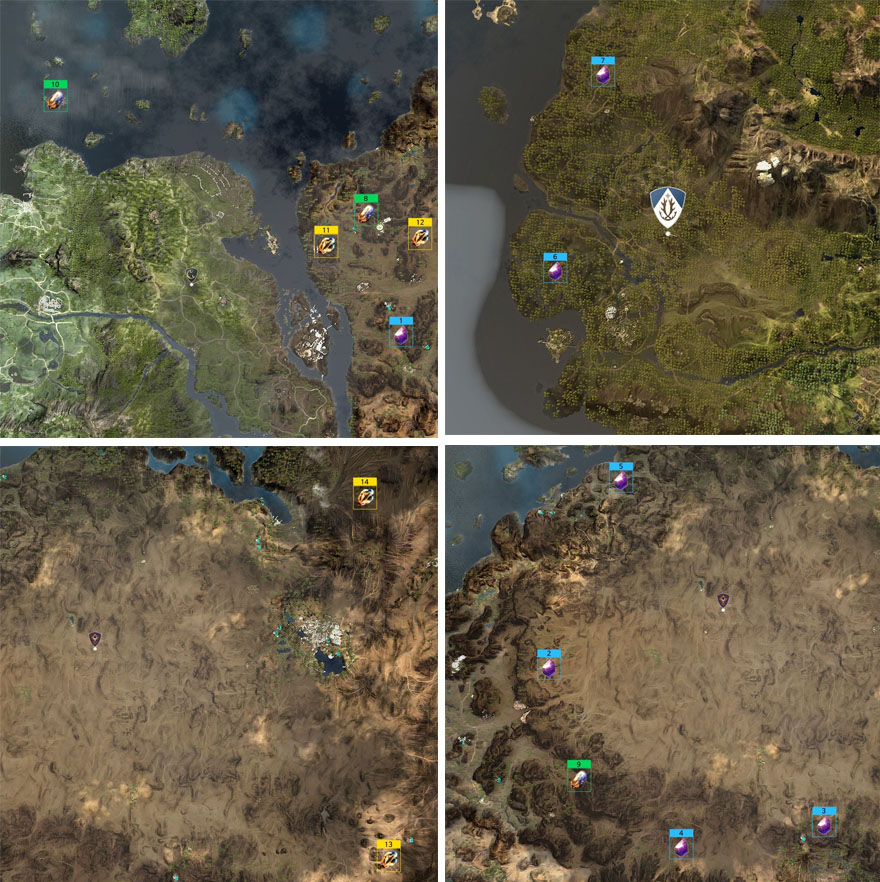 Q. Will I still get the PEN (V) Capotia accessory if I delete my season character after completing Fughar’s 40 days of quests?

Q. Completing Fughar’s 40 days of quests sounds too difficult for me… What should I do?

A. Don’t worry! The requirements for completing Fughar’s 40 days of quests only cover the basics for getting familiar with Black Desert.

Q. Is the Family-bound “Tuvala Gear” given in form of a box at the end of the season? Or does the Tuvala Gear in your possession just become Family-bound?

A. When the season comes to an end, the Tuvala gear of each respective type with the highest enhancement levels that your season character possesses will become Family-bound while the rest are all deleted.

If you have more than 1 of the same type with the same enhancement level, only the gear for the current season character will be changed, while the rest will be deleted.

Additionally, for Tuvala weapons, the weapon will remain for the same class after being changed.

A. Yes, season characters will be changed to normal characters when the season ends, and you can continue to play them afterwards.

Q. Can season characters access the normal servers during the season period?

Q. Do I have to fulfill specific requirements or reach a certain level with a season character to get the [Season] Boss Gear Exchange Coupon?

A. All Adventurers who create a season character will get the [Season] Boss Gear Exchange Coupon.

Q. Can I enhance or use Caphras Stones on the Boss Gear exchanged by using the [Season] Boss Gear Exchange Coupon?

A. Yes, you can enhance and use Caphras Stones on the Boss Gear exchanged by using the [Season] Boss Gear Exchange Coupon.

Q. Can I sell the exchanged Boss Gear on the Central Market?

A. The boss gear exchanged by using the [Season] Boss Gear Exchange Coupon cannot be sold on the Central Market.

Q. Can I equip the exchanged Boss Gear on other characters?

A. Yes you can, the boss gear exchanged by the using [Season] Boss Gear Exchange Coupon is a Family-bound item. In other words, you can use this gear on other characters as well, such as when leveling a new character.

Q. Can I use any leftover season enhancement items (Time-filled Black Stone, Refined Magical Black Stone, etc.) in the next season?

Even after the end of the season server, you can still get enhancement items, such as the Time-filled Black Stones, for completing Fughar’s 40 days of quests. But since you can’t enhance Tuvala gear once the season ends, you should sell them to the NPC Shops!

Q. Can I bring Advice of Valks obtained on the season server to normal servers?

Q. Are there any plans for a Arsha like server for the season server?

A. Yes there are; we plan to introduce a season character only Arsha server in 2 – 5 weeks.

More details will be announced in the future update notes!

View list
Comments 6
TheWhip
Lv. 61
How do you get hold of the preseason rewards?
1
SatanDragon
Lv. 61
if i deleted my pre creation char and crate new season char i will still get the pre creation rewards and can do the dailys or not btw i already done the first daily
0
The post was deleted.
Nagatobi
Lv. 62
This GM Note actualy was very help full . it answered almost every question that new players asked me about it ! thanks ❤️
0
The post was deleted.
GMax
Lv. 61
Weekly Season Quests Locations ? Where ?
0
Kaithyra
Lv. 61
Hello GM,

I would like to bring some interesting facts, what is happening over the whole season event.

So basically it is a great idea to have this season events going and i hope that it will not be the last one.
More content like this will be eventually very fruitful for the whole community.
But there are things that needs to be improved.
For instance. The drop of those Time-filled Black Stone are fine, but the place to grind them are crowded with people.

It is so easy for everyone to get the gear to grind a place, that the place become ungrindable as there will be too much people.
If you do not trust me, go check my yourself.
I even connected to the server 1 and 2 at 3AM in the morning and there was still 1 or 2 people grinding in NAGA for example.
I know the answer would be, "There are lots of place to grind, like polly or bashim" but even those place are super crowded.

The only place that is not crowded as such are places which need HIGH AP.
And it is logical.
Eventually, it would not be ok for me to criticize without bringing some idea to improve things.

So there are some ideas.
1. Release more seasonal servers.
We are seeing like too much people on the two servers. The latter are being overrun constantly and the other servers like for instance, B1 or C1 are very much empty.


2. Make the drop of those seasonal item to also being dropped in other servers which are non seasonal servers.
If someone don't want those item, they can either throw them, or sell them.
But this will decrease the number of person in the SEASON servers.
And to a__void people PKing those new players, just remove the capability to PK a Seasonal Character. And the person gets to decide if he wants to activate it or not.


3. This may be very difficult to do but it is an idea too:
Make the mobs visible to only one player or a party. What i mean by that is, that the reason for which someone is grinding a place, is that there are sufficiently enough mobs there, for him to do rotations. but if there are like 10 or 15 people in the same
place, it is practically impossible to do a rotation.
If the mobs are visible to only the person, this will solve the issue.

The season server are made in such a way that people are not interacting with each other, as the goal is to grind monsters and do quests.
There is no PK, there is no Duel.
So why seeing other people. There is no reason for it.

I gave 3 ideas, they surely are not the best, but at least i tried to find a solution.

There is a problem right now, and all problem have a solution.
Please find one.
Thank you very much.
0
The post was deleted.
Somilge
Lv. 60
I am not sure what to do with the Day 39 quest, I can no longer complete the quest? My season character is level 61 and I can't see the adventure log for Agris Steppe on the black spirit. How to proceed?
0
Cancel Register
Cancel Register
1
View list