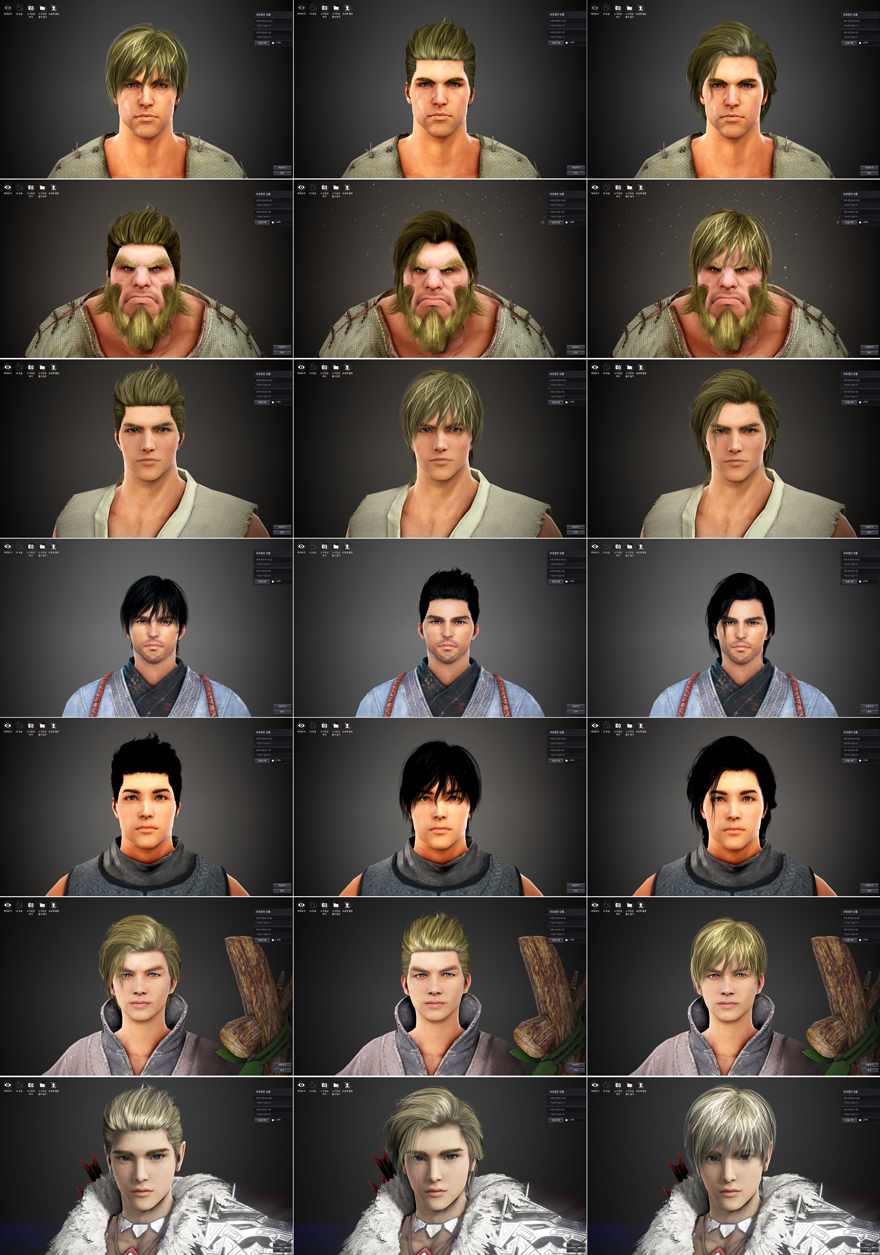 Revamped the Rich Merchant's Ring. This ring is the most precious treasure known to marketplace directors all across the continent, because it is the legacy of Al Yurad, the most respected figure in all of Valencian trade history.

We hope it becomes a must-have item treasured by adventurers Just like the Archaeologist's Map or Lafi Bedmountain's Upgraded Compass.

The existing Rich Merchant's Ring (pre-Central Market) had an exceptionally beneficial effect, and was accordingly quite difficult to obtain, so along with revamping its effects we went about adjusting the difficulty befitting to the new iteration as well.

We preserved the existing method of obtaining the item, but added additional routes to obtain the pieces.

Also, we made the 5% Market Tax Reduction effect specific only to the Rich Merchant's Ring, found nowhere else ingame.

The Rich Merchant's Ring may or may not have a major role in the adventurer's experience depending on their playstyle. However, to make sure no one feels left out, we opened up an extra opportunity so that adventurers without the ring can also benefit from its effects through the market benefit coupon. 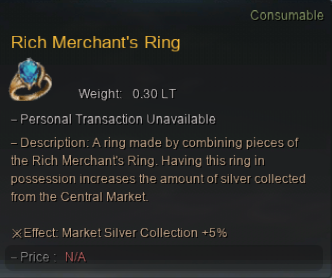 - Using the ring will apply the effect permanently onto your Family. You can check the applied effect in the Central Market window. The Rich Merchant's Ring won't disappear after use. 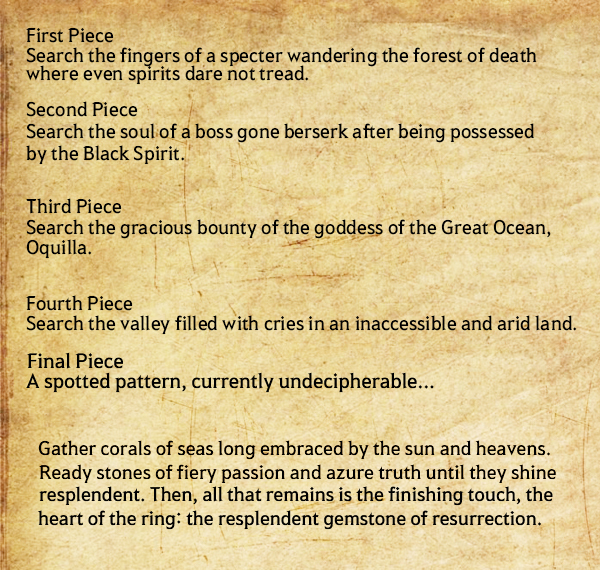 - The Fourth Piece will be available with the O'dyllita update.

You can obtain Shimmering Piece of the Old Moon through various means.

- Using the Old Moon Trade Pass will consume it, and you can confirm its effects on the Central Market window. Its effect will be applied when selling an item.

- The Old Moon Trade Pass effect can be applied to one item, including cases when the same item is sold in a stack. The effect will be applied even if you use the Partial Collect function. However, withdrawing listed items will negate the effect and it will be gone.

We've revamped the skill window with a new UI. We combined each skill's levels together to present each class' skills in a more intuitive structure, and added the Skill Present function you can use to save skill configurations before making any changes. Skill Presets even saves Skill Add-On settings, and completing Succession and Awakening quests will award one preset slot each, while completing Talent and Ascension quests will award two preset slots each. This means there is a maximum of two preset slots available per class.

This new skill window is quite a big change from the previous version, and we fear you might find it awkward. Please share your feedback with us so we can find ways to make any improvements, if needed." 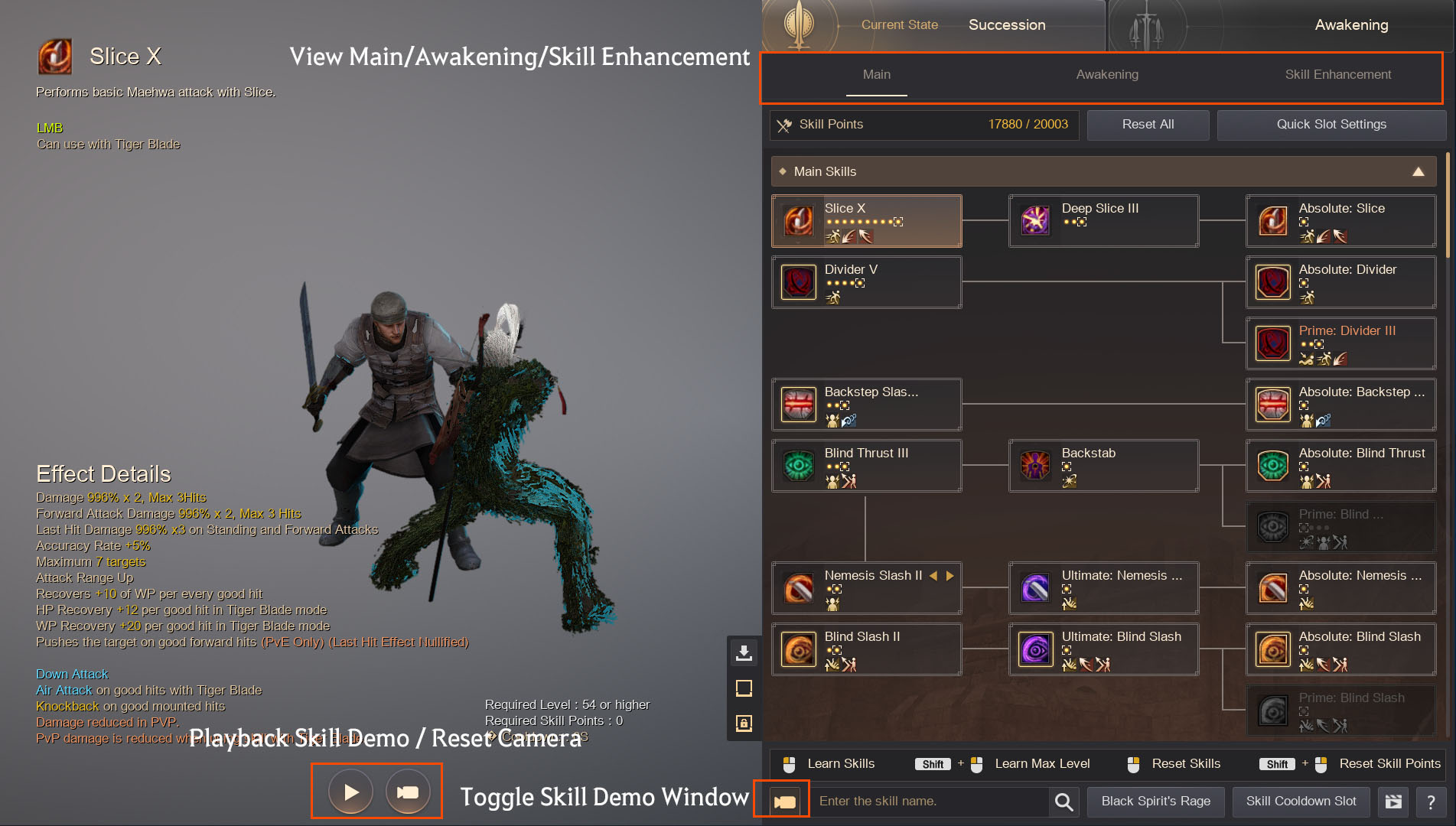 - You can toggle on/off skill demos with the button on the lower side of the skill window. 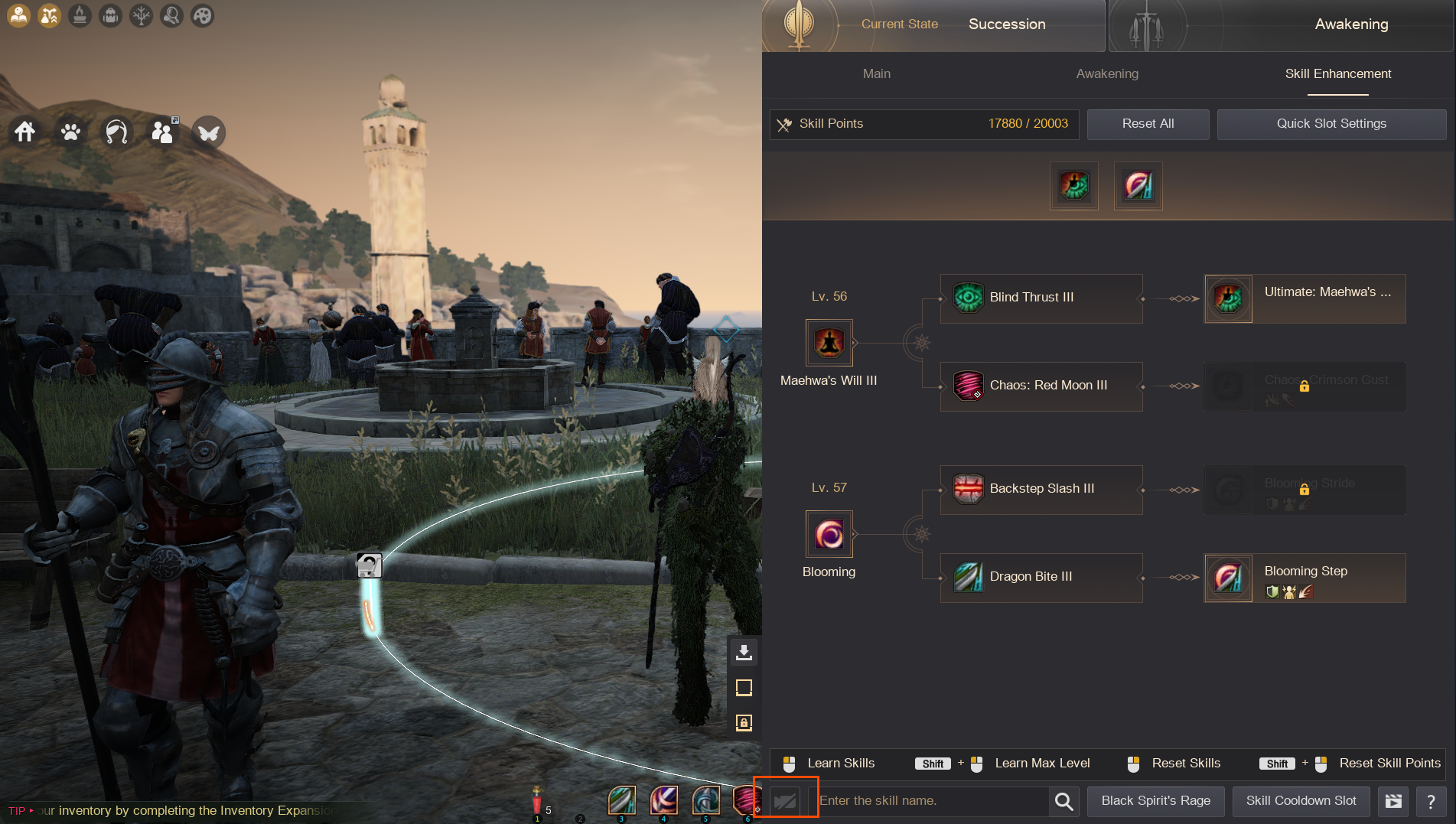 - Succession and Awakening skills can be accessed from the top right of the skill window once your character has completed their Succession or Awakening quests. 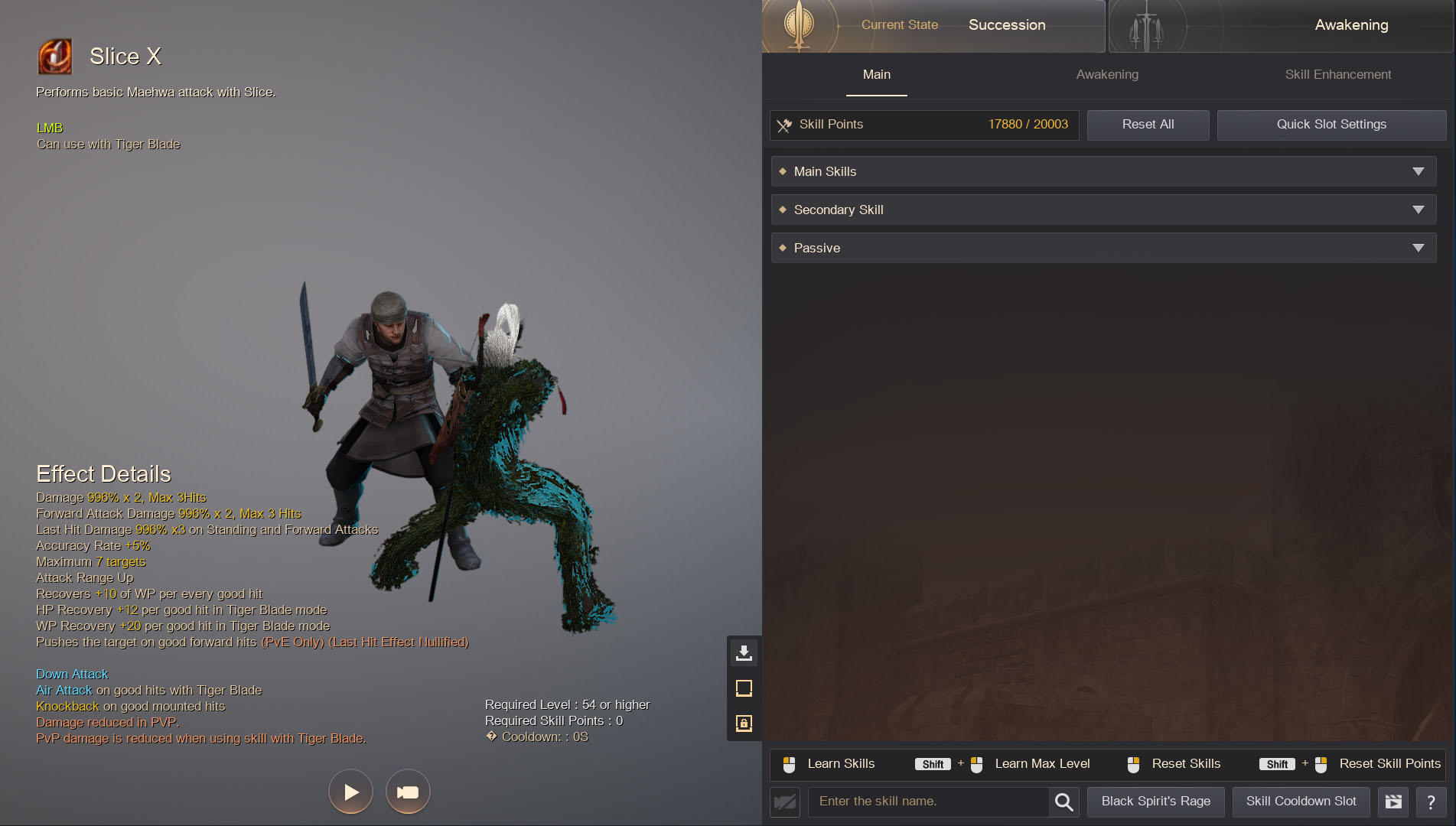 - Click each tab to see the skills in each category. 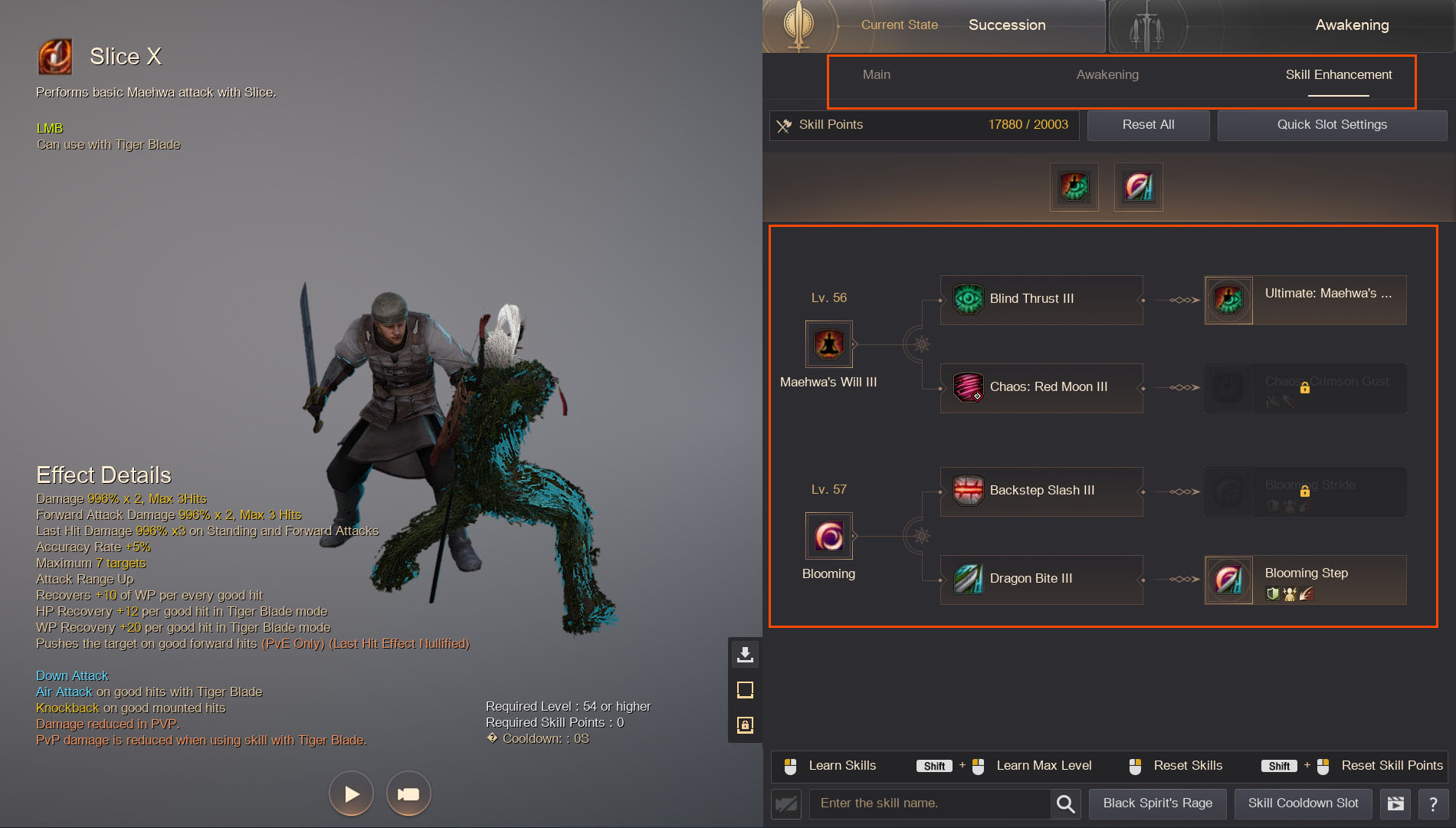 - Characters Lv. 56 and lower can freely reset all of their skill points via Reset All Skills. Right-click the skill icon to reset each individual skill, and holding down Shift while left-clicking the icon will reset the skill to its lowest level. 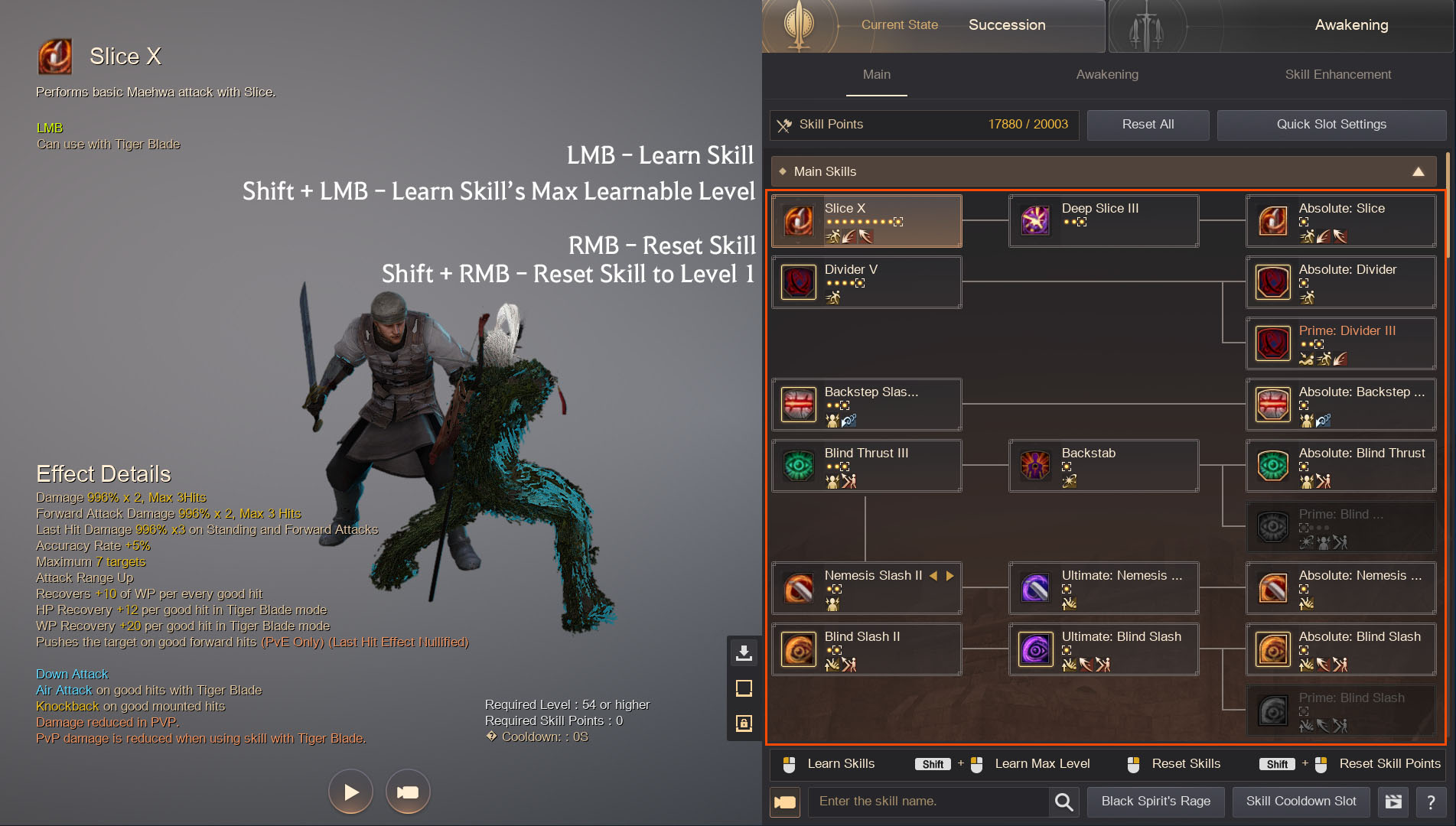 - Use the Cooldown Settings button to set how your skills' cooldowns will be displayed.

- Skill Presets save all currently learned skills and skill Add-ons which You can bring back when You need.

- You can save Skill Preset anytime, but to load Skill Preset you will either need a Secret Book of Old Moon and be in a Safe Zone, or go find a skill instructor. 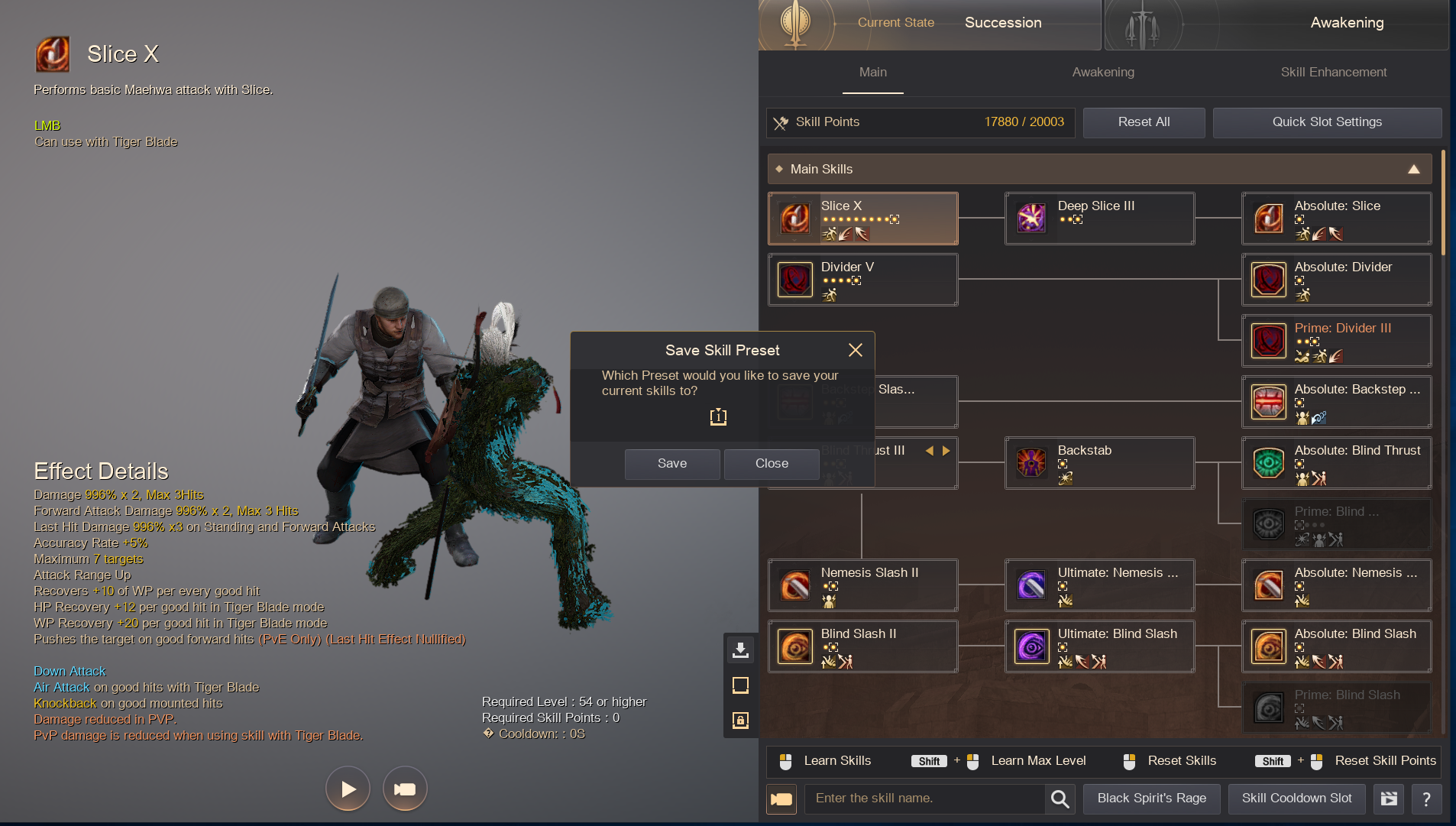 ※ Using a Secret Book of Old Moon to load previously saved Skill Presets will lock you to a 1 hour cooldown, while talking to a skill instructor only has a 10 minute cooldown.

- You can obtain one skill Preset Coupon For each time you complete your class Awakening and Succession quests. 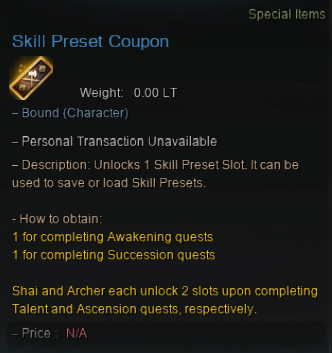 ※ You will get two Skill Preset Expansion Coupons when you complete a series of Talent or Ascension quests.

- Characters that have already completed their respective Awakening, Succession, Talent, or Ascension quests series can talk to the Black Spirit to obtain the coupons via the [Skill Preset Coupon] quests.

- When loading a Skill Preset, your character will act out differently according to their class.

- You can reset your skills without the Secret Book of Old Moon or Armstrong's Skill Guide via the notification window which pops up regarding skill reset upon saving or loading Skill Presets.

- This adventure log consists of books recommended for adventurers by Pavino Greko, the (in)famous novelist/storage keeper of Epheria. It is unique compared to existing adventure logs because each volume has a specific theme.

- Adventurers who are Lv. 56 and higher, and have completed the Valencia Main Quest "Edana's Descendant" can summon the Black Spirit and change its look.

- You can obtain a variety Of different appearances For the Black Spirit from completing Main quests and adventure logs.

- You need to resummon the Black Spirit after selecting and applying a new appearance For the change to occur.

● Added an alert for 15 minutes before the Thousand Years War begins, and extended its time by 10 minutes.

● You can no longer use the Greet function in Papuraora and Crinea.

- However, the total amount Of damage applied in PvE remains the same as before.

Absolute: Charging Wind - Fixed the issue where the skill's PvE only knockdown effect was applied in PvP after charging the skill 4–5 times.

- A total of 8 weekly quests have been added, which you can pick and choose 1 to complete each week.

- You can find these quests In the Quest (O) window under "[Season] Stronger Tuvala Gear" in the New Quest and Recurring tabs.

- Accept the quest from the Black Spirit after completing part one of the Valencia main quests and gaining the knowledge "Reanimated Ancient Puturum."

- the quest can be completed simply by talking to the Black Spirit, and You will get Ancient Puturum Summon Scroll X1 as the reward.

Added a banner that opens up the Black Spirit's Safe when opening up a Season Character's inventory window.

Made separate buttons for assigning or removing a suboperator for the Arena of Arsha.

Added a banner to the Equipment window of season characters that leads to Black Spirit Pass.

- This banner is only visible for Season Characters.

- Click this banner to open the window to the Black Spirit pass.

Fixed the issue where certain effects appeared unnatural in the Skill (K) window.

Fixed the issue of being unable to connect with a Trial character in certain situations.