Tranan Underfoe, the blacksmith of Velia, has a strange tale for you of an island somewhere in the Great Ocean. Many brave sailors have searched for the Crow's Nest, yet returned in failure. That is if they were lucky enough to return at all. Now, you will have a chance to search for this misty island shrouded in mystery. Chase after that tale and you will get to meet the owner and founder of the Crow Merchants Guild, the "First Crow" and gaze upon a display of some of his most valued treasures in the Hall of Heroes. You will also be able to participate in the Pit of the Undying, a battle arena steeped in secrets. 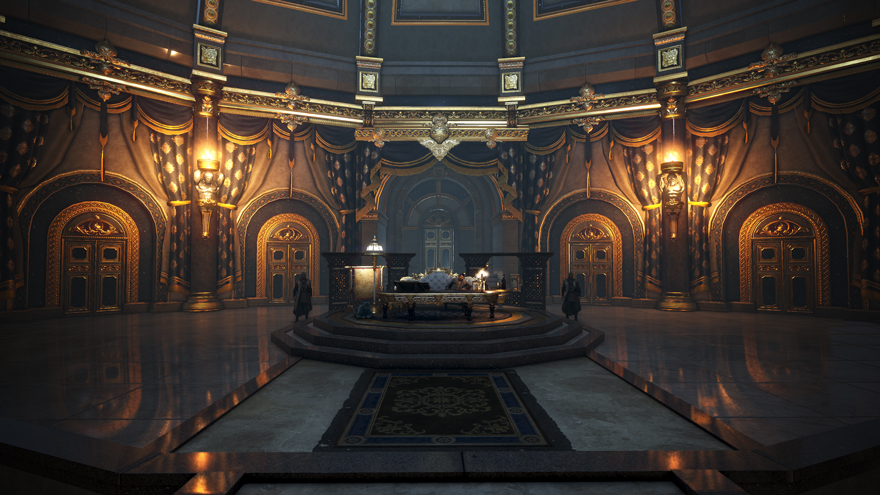 Added the quest series [The Great Expedition] Crow's Nest. It is available once per family, for a character that is at least Lv. 56.

- You can check out the quest series under the Suggested tab of the Quests window, which will direct you to accept the first quest from the Black Spirit.

- Crow's Nest does not appear on the World Map, so you cannot use auto-navigation to guide you there.

On one pitch-black urban night, a Crow who already had both fortune and fame firmly in his grasps came up with his darkest venture yet.

"Ladies and Gentlemen, we proudly present to you: Pit of the Undying."

When we were coming up with this content, many things were going through our minds. Many of you have asked for more suspenseful, tactic-based PvE content. However, we had many stumbling blocks for adding this. This is because many of our classes do not have clearly defined roles, our game is in an action-packed hack and slash playstyle, and this game is an MMORPG with an open world of variables. How could we add this kind of content without going against the direction we have been developing Black Desert Online so far? We also didn't want to distract from the fun of fighting bosses. Pit of the Undying is the result of all these considerations. We expect to add more diverse types of monsters to the pit of the Undying for you to challenge. We hope you enjoy this content and await your feedback. 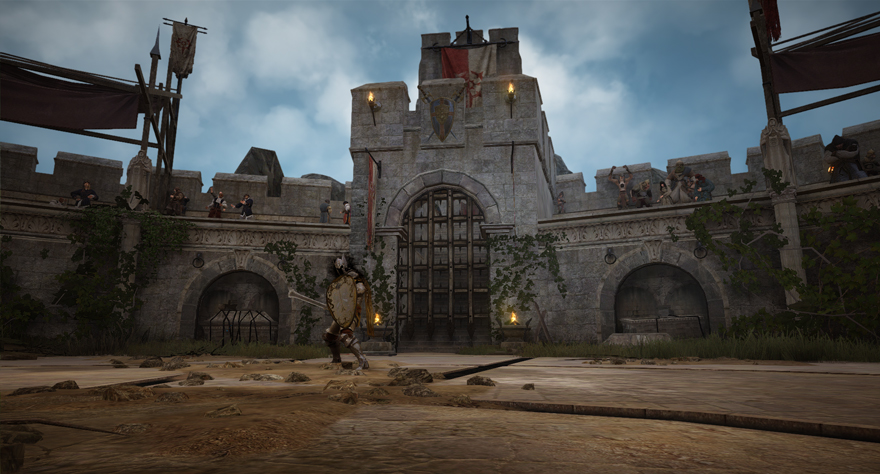 - The Pit of the Undying is a battle arena created by the First Crow for fighters to face off against his carefully selected Crow's Warriors in seemingly endless rounds of battles for glory.

- As you succeed in the Pit of the Undying, you can collect Seal of the Undying items and get Undying Crow's Insignia of a higher grade.

- You will get your first Undying Crow's Insignia after completing the quest series [The Great Expedition] Crow's Nest.

- Seal of the Undying is the key to the First Crow's exclusive Crow Shop, which is only available at the Crow's Nest.

※ This exclusive Crow Shop will be available after a later update.

※ If you die in the Pit of the Undying during the main Crow's Nest quests, do not forfeit the quest but interact with Chorpy if you want a rematch.

- You can get this new gear instead of certain gear that was given out as rewards for completing main quests in Serendia and Calpheon.

- Naru gear was designed for adventuring in Serendia, Calpheon, and Mediah. As you complete the main quests in these regions, you will be able to get the new Beginner Black Stones needed for enhancing this new gear.

- Because Naru gear was made for adventurers who are just starting out on their adventures, we have made them easier to enhance, with an even higher chance for success compared to Tuvala gear. You also need less Cron Stones for safe enhancement. In fact, you'll only need 3 for trying to enhance from TET to PEN! Therefore, be sure to give enhancing them a go!

- Season characters can go to Fughar the Crow Merchants Guild Chief Manager after completing the Mediah main quests to trade in your PEN Naru gear for PRI Tuvala gear, which should serve you better as you journey onward to new horizons.

- You can only enhance Naru accessories (i.e. earring, necklace, belt, and ring) to TRI level.

Although non-Season characters cannot open the box containing the PRI awakening weapon, they can still sell it to an NPC vendor."

- We hope these new hairstyles and the ones we added last week inspires you to try out new customizations for your characters!

- Once your HP is less than 50% of your max HP, this new effect will decrease the amount of damage you receive by at least 10%.

- Depending on what percentage of your max HP remains, the effect will increase up to Damage Reduction +50%.

- As your HP recovers, the Damage Reduction effect will adjust accordingly.

- Similar to the other season servers there will be a Combat and Skill EXP buff. However, there will be an additional Item Drop Rate +50%, like in the regular Arsha server.

- PvP between characters (including forced PvP) will be free from all penalties in this server.

- World and field bosses will not appear in this server. 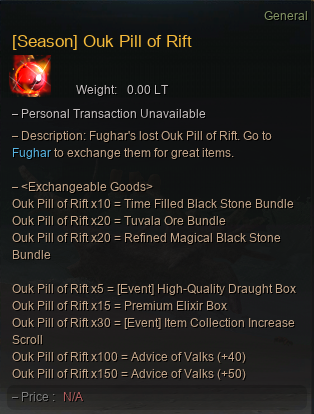 ※ If you have already started one of the above adventure logs, you will be able to proceed as normal.

- Each skill has its own special effect such as adding additional hits or increasing attack range.

Tapu of the Golden Troupe has left items for you to exchange for at Velia, because he felt some adventurers recently had trouble exchanging their Golden Troupe Coins.

- Added information about this new exchange NPC to the description of Golden Troupe Coins.

* Who can deposit the item: Guild Member or up

* Who can withdraw the item: Guild Officer or up

- This effect will apply only to the monsters in the aforementioned regions. (Monsters in  the Abandoned Monastery (Restricted Territory) won't be affected.

● Fixed the issue of the World Boss Kutum not granting rewards if Kutum's defeated body ends up stuck in a wall or the floor.

- All horse tiers including Dream Horses

- All wagons (including Forest Path Wagon)

- These quests will be automatically accepted if you enter the monster zone with a Lv. 56–57 character.

- Non-season characters will only gain EXP from completing these quests.

- Completing the Main Quests and normal quests will provide a faster leveling experience.

- Yonal's workers will be holding up torches to light the way to easily reach Cokro Chamber.

- If Valencia Castle's gates are closed, we made improvements so you can enter Cokro Chamber via another cave entrance.

- You can now use Navigate within the Cokro Chamber, and it is easier to discover the special artifacts.

- With the addition of new quests to improve the investigation questline beneath Valencia Castle, we've changed the descriptions in the Quest (O) window and quest summaries.

※ To prevent any confusion for adventurers who've already completed the previous quests, anyone who completes the new quests will have them removed from their Quest window.

- We recommend players to unlock Awakening, Talent or Ascension before challenging the daunting desert of the Valencian continent.

● Removed Magical Armor and Magical Sub-weapon Boxes from Main Quest rewards, as well as the following quests from Becker and Bacho Ladericcio.

- [Repeat] Becker and the Magical Sub-weapon

- You will still be able to obtain Roaring Magical Armor from completing the Mediah Main Quest ""[Boss] Illezra's Servant""."

- Added the "Spring Breeze of the PLains" knowledge to Mediah Adventure Journal I.

Increased the width of the Black Spirit Pass window.

Fixed the issue where you would see an error message alerting you that you couldn't make a Trial Character with the selected class.

Improved the sound of the flute instrument to be more natural.