For Adventures who’ve had their fill of the Season servers, we’ve added a way to graduate to the regular servers ahead of schedule!

By graduating early, your season character will be converted to a regular character that can equip the normal equipment, but be warned, because you’ll no longer be able to access the season servers and receive the season challenge rewards once you graduate.

You can see early graduation schedule below, and all season characters will be converted to regular characters on August 26th. Additionally, there are no requirements to graduate early, so visit Fughar when you feel you are ready to graduate.

[Step 1] Visit and interact with Fughar, the friend of all season characters 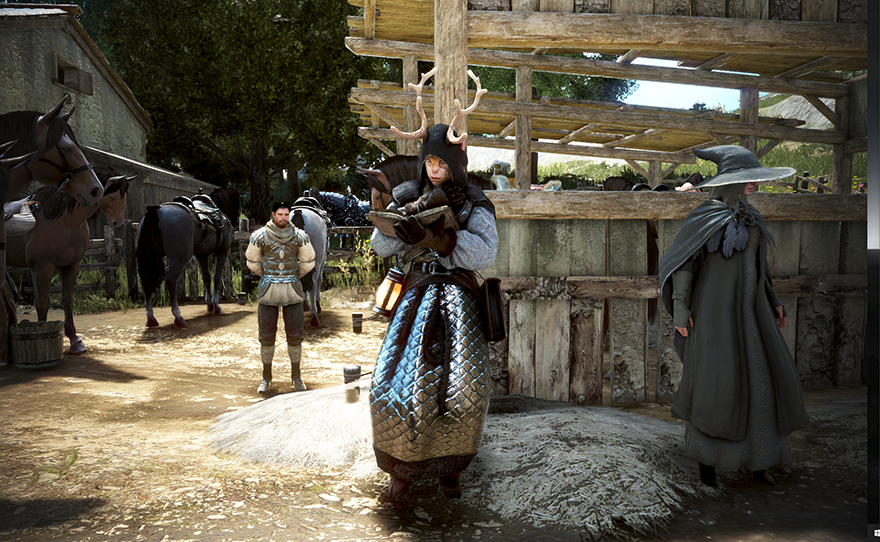 Interact with the [Crow Merchants Guild Chief Manager] Fughar (located in each town/city) and select “I want to convert my season character to a regular character”.

Go to the Leyla as instructed by Fughar, and accept the quest “[Season Server Graduation] At the Crossroad” from Leyla. Return to Fughar once you complete the quest.

Interact with the NPC Fughar to obtain the “Honorable Adventurer's Certificate” and accept the quest “[Season Server Graduation] Into the Big Wide World” from the Quest (Q) window.

Move to a regular server and use the “Honorable Adventurer's Certificate” to convert your season character to a regular character!

Now you’ve successfully completed converting your season character to a regular one. We’ll be cheering you on as someone who will continue their adventures in a larger and rougher Black Desert world!

The NPC Fughar has prepared a surprise present for Adventurers who converted their season character to a regular character, so let’s go find Fughar once more.

Interact (R) with Fughar and click “Used the certificate” to receive the Gift Box Full of Memories.

- Note: You will get 2 for Earrings and Rings. 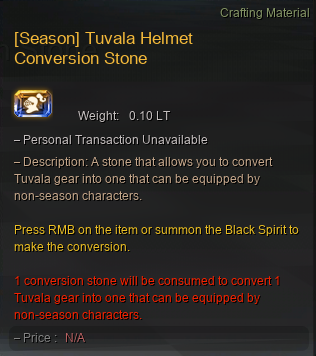 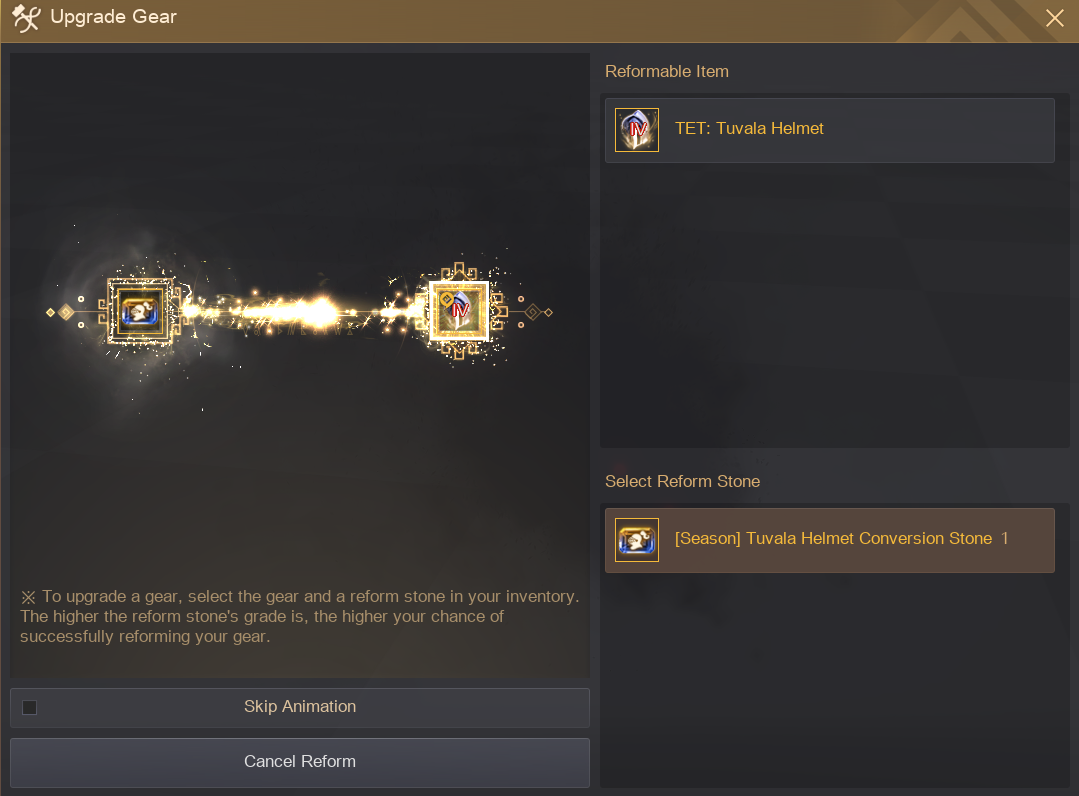 ⚠️Unconverted Tuvala will be deleted during the maintenance on September 2, 2020 (the start date of the next Season). Make sure to convert your Tuvala Gear beforehand! 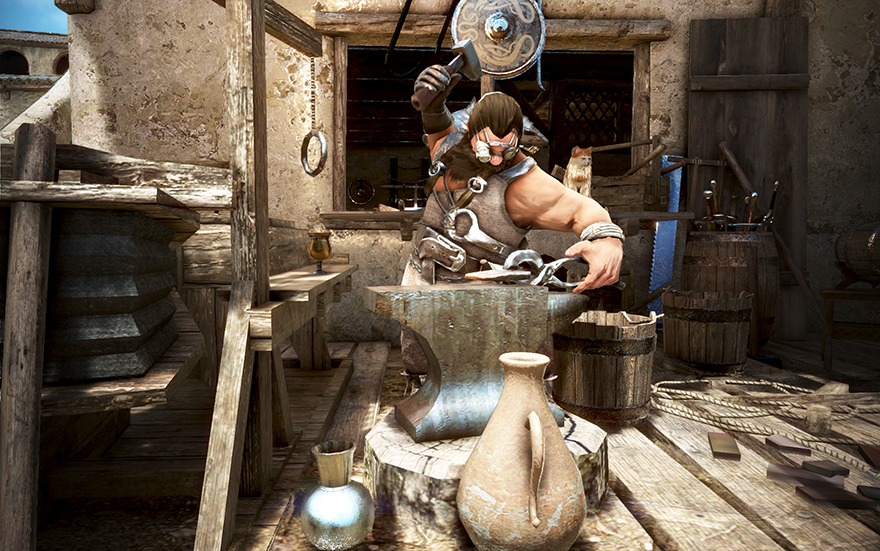 Finally, the last stage in graduating.

As mentioned in the previous GM Note, you can exchange one Tuvala gear for Boss Gear, and in today’s GM Note, we will tell you how that works.

First off, only Tuvala gear that was converted with a conversion stone can be exchanged for Boss gear using the “[Season] Boss Gear Exchange Coupon”.

Before you can exchange for Boss gear, you’ll need to complete the quests below, which you can accept from the NPC Fughar.

Once you’ve accepted a quest to exchange for a certain piece of Boss gear, go to the blacksmith in Velia, Tranan Underfoe.

⚠️ You must follow these steps in order to exchange for Boss gear.

Exchanging Tuvala gear will get you the following enhancement level of Boss gear.

※ The exchanged Boss gear cannot be sold on the Central Market.

We stated in a previous GM Note that you can get a PEN (V) Capotia accessory once you’ve completed all 40 days of Fughar’s daily quests. Check out how you get the accessory below! After completing all 40 days of Fughar’s quests, you can accept the quest ‘[Season] Fughar's Gift’ from Fughar and complete it to choose between either a PEN (V) Capotia Earring or Ring.

The [Season] Fughar's Gift quest will be added during the maintenance on August 5, the same day early graduation begins. Please note you can’t get both the ring and earring, so make sure you carefully choose the accessory you need the most.

⚠️Adventurers who’ve completed all the 40-day quests, but deleted their season characters, have nothing to worry about. You can still obtain one of the PEN (V) Capotia accessories with the same way using a regular character.

[Q] Can I create a new season character after graduating early?

[A] You cannot create a new season character after graduating early.

[A] All season exclusive items, including unconverted Tuvala and season enhancement materials, will be deleted at the start date of the next season during the maintenance on September 2, 2020.

[Q] What happens to the crystals and PEN (V) creator name on the Tuvala gear when you use a conversion stone?

[A] Tuvala gear that was converted with a [Season] Tuvala Conversion Stone will retain their “Item Branding”, “PEN (V) Creator Name”, and “Transfused Crystals”.

However, crystals transfused on an item that will be exchanged using the [Season] Boss Gear Exchange Coupon must be removed before the quest can be completed, so make sure to extract the crystals at a Blacksmith beforehand. Also, “Item Branding” and “PEN (V) Creator Name” will not be retained when the item is exchanged.

Make sure you know the difference between a “conversion stone” and “exchange coupon” before using them!

[A] If you accidently convert the wrong Tuvala, please contact us via [Support] -> [Submit a Ticket]! We’ll take the mistakenly converted Tuvala gear and give the Tuvala gear you want. However, this assistance is only available once per Family, and the taken Tuvala gear will be unrecoverable as it will be deleted. Only Adventurers who submit a ticket before the maintenance September 2, 2020 will be eligible for assistance.

[Q] Can I use the [Season] Boss Gear Exchange Coupon to exchange for a weapon of a different class?

If you use the [Season] Boss Gear Exchange Coupon on Tuvala gear that was converted with a Tuvala Conversion Stone, the weapon will be changed to a box form that you can open with the class you want the Boss weapon for.

[Q] Can I get rewards from the Black Spirit Pass Challenge after graduating early from the Summer Season?

[Q] Can I change Tuvala weapons to a different class than my season character’s class?

[A] You can use Main Weapon/Awakening/Sub-Weapon Exchange Coupons on Tuvala weapons converted with a conversion stone.

[Q] After exchanging Tuvala gear for Boss gear, can I enhance the exchanged Boss gear?

[A] Yes you can. Once you’ve exchanged the Tuvala gear for Boss gear, you can attempt to enhance it just like normal Boss gear, but you cannot put it for sale on the Central Market.

[Q] My season character is level 40... Can I still get the Gift Box Full of Memories?

[A] There are no separate requirements (level requirement, complete Fughar’s daily quests, etc.) for graduating early! Season characters can graduate and get the rewards at any time before the start of the next season.

[Q] When can get I season server rewards: Advice of Valks (+100) and the PEN (V) Capotia accessory?