Here are the updates made to Black Desert on September 9, 2020.

● Artina, the Wandering Magician who awakened the Shai to her Talent, has established Artina's Instrument Shops in the following three locations:

* Artina's Instrument Shops will be marked with an instrument icon on the world map.

● Only classes that can perform with instruments may use Artina's Instrument Shop services.

● A beautiful stage is set up in front of Artina's Instrument Shop.

● Changed the area in Lake Flondor close to Artina's Instrument Shop as a Safe Zone. 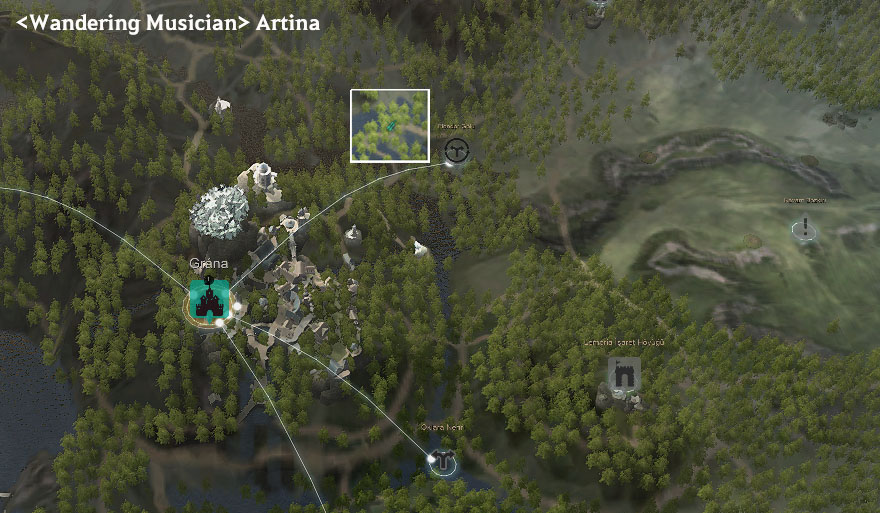 ● You can purchase 5 new instruments from Artina's Instrument Shops.

* Upon purchasing the above instruments, you will be able to perform with them through the Music Album. 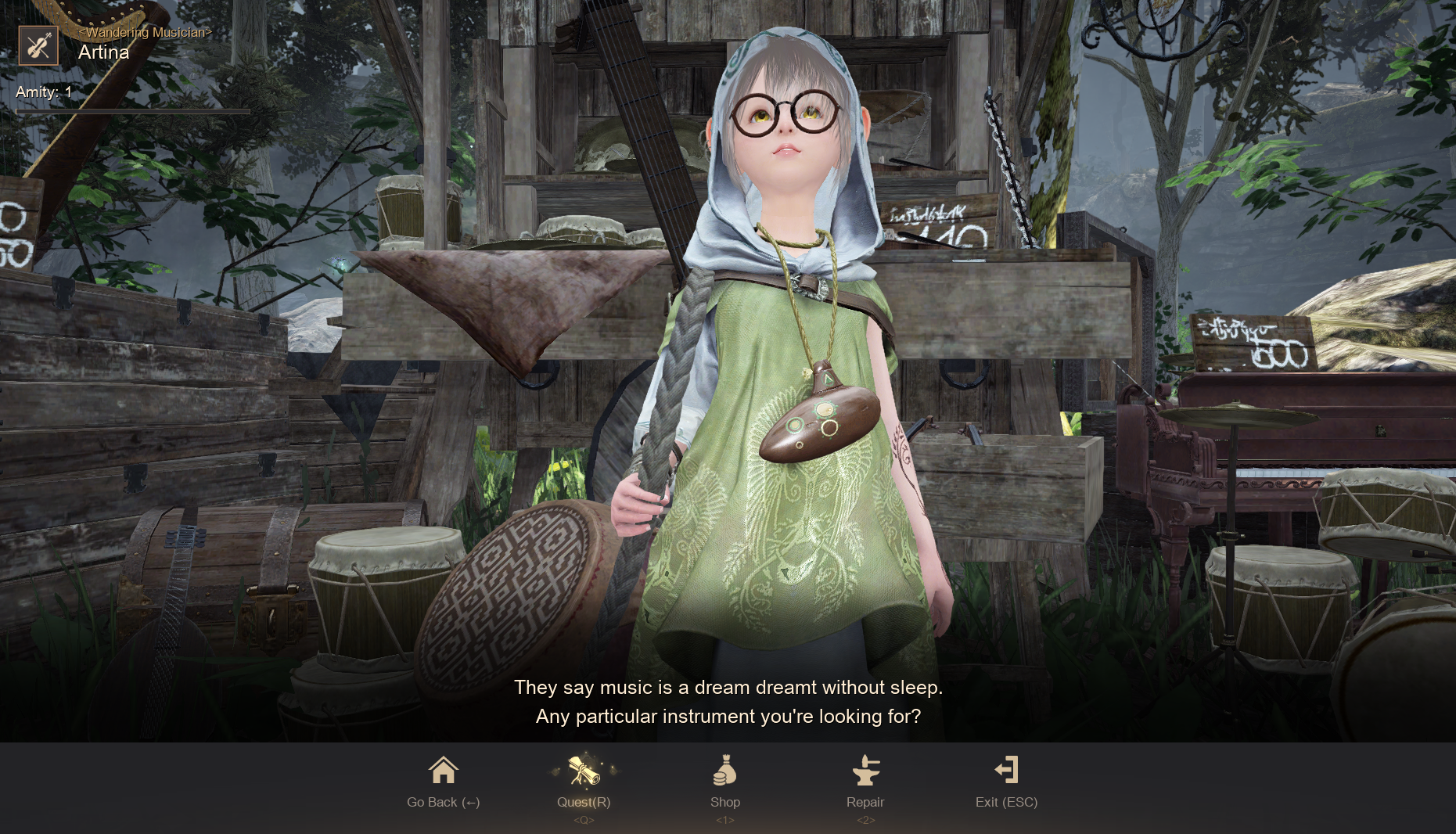 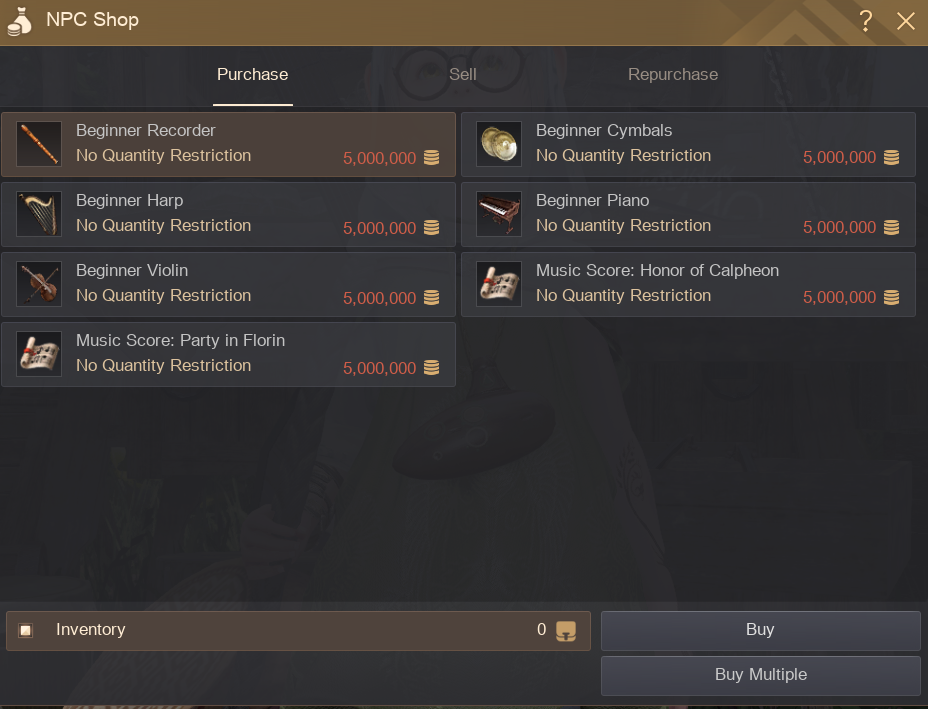 ● You can now purchase special music scores to learn about the minor stories of Black Desert.

- Use the music score items to accept the respective quests.

- Music Log quests can be accepted and completed once per Family by a class of Lv. 56 or higher who is capable of performing music.

- You will need to have checked the "Life" Quest Type to accept these quests. You won't be able to use the music score items both during and after completing the quests.

- Currently there are only two music scores available at Artina's Instrument Shop - "Honor of Calpheon" and "Party in Florin."

After we updated the Compose & Play system, many adventurers have been enjoying this content. Particularly those in Taiwan, Thailand, Southeast Asia, Turkey and Russia have been composing their own songs and carrying out popular concerts amongst the adventurers. The reception was particularly above our expectations, and so we decided to add 2 additional instruments along with the 3 instruments we had originally planned on updating. For all adventurers in the world asking for more instruments, we hope this update will serve as a small gift from us. The added instruments are of the "Beginner" levels, as we plan on adding intermediate and advanced levels that will play better or worse depending on the adventurer's music grade (you may end up going out of tune and producing awful sounds if attempting an instrument higher than your music grade). Also, we are currently looking at different ideas to make Compose & Play more approachable for all adventurers.

● In order for more adventurers to challenge Patrigio's Pit of the Undying, we have changed the way the daily duels are carried out.

- Changed it so that even after losing a match in the Pit of the Undying, you can forfeit the quest and reaccept it to fight once more.

- You can now continue at the level of the fight you lost to.

- After finishing the second duel and receiving the reward, you'll have a chance to face Yulho in a 1:1 duel. However, you cannot re-attempt the fight if you lose.

● Changed it so now you can challenge previous levels of the pit based on your insignia.

- You may only proceed with one daily quest per day.

Example) An adventurer with a TRI grade insignia can choose from all quests of PRI - TRI grade. However, accepting and proceeding with a quest of a certain grade will prevent the adventurer from attempting a quest of a different grade.

● Purajin of Valencia has succeeded in a new method to store Energy. You can now convert unused Energy into Energy Potions through this NPC.

- These challenges may only be completed during the Season Period, and will be achieved once you reach levels 60, 61 with a Season Character.

● Flow: Tempest - Reduced the skill's cooldown to 9 seconds, and increased the damage amount.

● Waltz of Wind - Reduced the skill's cooldown to 7 seconds, and removed the damage reduction effect while on cooldown.

● Flow: Rushing Wind - Reduced the skill's cooldown to 6 seconds, and added 2 more hits to the skill.

● Regeneration - Reduced the skill's cooldown from 18 seconds to 12 seconds.

● Cataclysm - Increased the skill's speed and improved the skill comboing into other skills.

● Flow: Magical Evasion - Improved the skill to combo more smoothly into other skills after used backwards.

● Chilling Wave - Improved the skill to combo more smoothly into other skills after use.

● Tail Cutter I - III, Absolute: Tail Cutter - Fixed the issue where the skill's Down Attack effect was not being applied.

- No collision while moving

- Pushes the targets on good hits (PvE Only)

● After a long period of interpreting the ancient language of Ronin, Tvisa, the tooth fairy of Kamasylvia, has finally unlocked a new formula for a brand new crystal.

- According to Ronin's records, this crystal is called the "Rebellious Spirit Crystal" and can be obtained by combining the three crystals below through Simple Alchemy.

- The Rebellious Spirit Crystal can be fused into Sub-weapon sockets.

The Rebellious Spirit Crystal is an upgraded version of the spirit crystal that could be obtained through the Main Questline. Many adventurers have obtained these spirit crystals over the course of two seasons, yet due to feedback on the crystal's being somewhat lackluster, we implemented additional effects of Extra AP against Monsters and Skill EXP increase to aid those seeking to further increase their character's power and/or those leveling alt. characters.

● Added line breaks to the item description for Traces of a Festival.

● Removed the text from the Rift's Echo item of not being able to attack summoned monsters on a server undergoing Node/Conquest Wars.

● Changed the conditions for new characters to use the Weapon Exchange Coupon.

● Mutant Loah Snakes long exposed to the scent of Loah Flower Pots have been discovered on Padix Island.

- Mutant Loah Snakes are greater in size compared to other Loah Snakes, and also emit light from their bodies.

● Fixed the issue with the Kagtum Guard that spawned at a low chance at Blood Wolf Settlement from sometimes not going to combat stance and disappearing from battle.

● Fixed the issue with the Sherekhan Guardian Spirit sometimes disappearing immediately after spawning.

- Even upon defeat, the Giant Mudster will move around to other regions of Serendia, threatening monsters in those areas.

- The Giant Mudster can move up to two different locations.

- Swamp Fogans and Swamp Nagas are quivering with fear, not knowing when and where Giant Mudster will strike next.

● Your character will now make a cheering motion when obtaining Remnants of the Rift.

- Each quest can be accepted through the Black Spirit after completing all regional Main Quests excluding Valencia.

- You can find the outfit box in your Pearl inventory.

- Characters who completed the Main Quests prior to the revamp may also accept these quests.

- These quests can be completed once per character.

When first playing the game, the change in your character's appearance gives another new and exciting feeling different from the impression the growth process gives. Thus, based on this concept, we awarded adventurers who complete the Serendia Main Questline the Serendian Soldier (Costume), to which we've heard requests for more variety. Particularly after the emergence of Naru and Tuvala gear, there's been less opportunities to experience appearances of the green and blue gear variety. Hence, we've decided to add additional gear appearances for the adventurer to wear. However, they will not have the normal outfit effect.

- This quest can be completed once per Family, you will need to check "Life" in Quest Types, and your Training level needs to be Professional Lv. 1 or higher.

- Handing in Golden Seal - [Imperial Training] x100 will complete the quest, and you will receive a coupon to change the name of your mount.

● Fixed the issue with "Collect a fancy piece of clothing" of Deve's Encyclopedia Vol. 6 not accepting [Hashashin] Calpheon Noble Dress to complete the quest.

● Fixed the Quest window to no longer have quest titles and icons overlap.

● You can now only move the Sweet Gift Letter window by selecting its title bar.

● Increased the font size of the text explaining crystal effects in the Transfusion window.

● Changed the window size of Crafting Notes and Beauty Album to be fixed in most resolutions.

● Fixed the issue with the Minimap (M) not playing a sound when setting Navigate to a Dark Rift.

● You will no longer hear any sound effect when pressing SPACE while opening a special item.

● Improved the Pearl Shop (F3) to now play pet sounds when viewing pets in the shop.

● Fixed the issue where inputing the number of items to purchase in the Pearl Shop with the Numpad would make the Monthly Loyalty (Moon's Blessing) display incorrect figures.

- Fixed the issue where using the Weapon Exchange Coupon would display the previous weapon's image.