● Fixed the issue where certain classes performed abnormal actions when Combat Assistance was turned on.

- Pulls in target on hit (PvE Only)

● Fixed the issue where the Elixir of Corrupted Armor was said to last 5 minutes even though it lasted for 8 minutes.

- The actual duration is 8 minutes.

● Changed the text that appears in Black Spirit's Adventure when using dice or Aracana to appear more natural.

Fixed the issue where Nova was being mentioned in the item description for the New Year Hanbok Costume Box.

● Fixed the issue where you couldn't use Simple Alchemy on Enchanted Scroll (+45), the reward for completing the Season Pass challenge ""Karanda, Queen of the Harpies!""

● According to the famous hunter Roussea, there are animals holding life energy are roaming around Narcion in O'dyllita.

- If you get the item ""Life-bearing Wind"" while butchering a hunted animal, the boss hunting monster will appear.

- Butchering the boss hunting monster has a higher chance of dropping the "Breath of Narcion" and gives more of the standard loot.

- Reduce the HP of Grass Rhino that appear in Narcion by 30%. 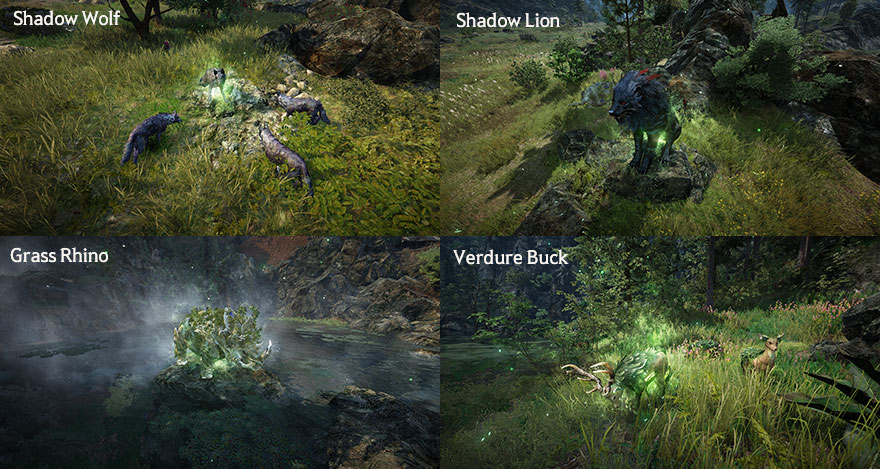 - Increased the amount of Hunting EXP gained from butchering a hunted Grass Rhino by 4.5 times.

- Increased the amount of Hunting EXP gained from butchering a hunted Shadow Wolf by 8 times.

- Increased the amount of Hunting EXP gained from butchering a hunted Shadow Lion by 1.4 times.

● Fixed the issue where Bloodstorm Nouver moved too often.

● Increased the amount of loot and silver obtainable in the following Mediah regions by around 2 times. Following this change, drop rates were reduced by 50%. Defeating monsters in these regions will now be less straining on pets.

● Fixed the issue where the Ahib Salun Wolf Spearmaiden in Thornwood Forest could not move on certain terrain.

● The monsters from Black Rust Habitat in the Vadabin Sea area will no longer attack you first.

- If you attack a Black Rust first, it will attack you along with Young Black Rusts.

● Changed the Auto Mount Skill function to only be displayed for adventurers with Training Artisan 1 or higher.

● The Otters on Crioniak Island fixed the hole on their wharf.

● Fixed the issue where distant scenery appears abnormal when changing the graphics setting.

● Povios, a member of the Calpheon Xian Merchant Guild that was sent out to the Grána Dairy Farm in Kamasylvia, has some interesting quests for you to do while avoiding the gaze of Ganelles.

- You can get the quest "How a Merchant Guild Survives" from Povios if your character is Lv. 58 or higher and has 1 or higher amity with Drieghan Chief Durgeff.

- If you decline Povios' offer, you can accept the quest ""Two Faces of a Hero" from Black Spirit to follow a different storyline.

- The quest series stated above can be completed once per character. However, the final quest rewards can only be accepted once per family.

- You may suffer loses with the other side of the conflict depending on who you support.

- You must complete the reworked Kamasylvia main quest series to meet Pavios at Grána Dairy Farm."

● Changed the location of the guard in front of Ancient Stone Chamber.

- Before: Lv. 55 or higher, accept and complete the ""Past Glory"" questline from NPC Konah of Altinova Arena

● Added new quests to acquire pets to accompany you on your journey in Valencia Territory.

*You can accept the following quest with a season character, once per family, and can be accepted from Quests (O) > Suggested > [ADV Support] Pets, Loyal Companions.

● Rumor has it that Croix, the wharf manager at Velia, has begun crafting a map of the Great Sea. Help Croix to identify the locations of islands in the waters of Calpheon, Epheria, and Balenos, and receive a special gift he has prepared.

* Season characters level 20 and higher can accept the following quests from Croix, wharf manager at Velia:

* You can complete these quests by obtaining knowledge from node managers of specific islands located in the waters of Balenos, Calpheon, and Epheria.

* Complete these quests to obtain enhancing materials for Tuvala gear.

* Complete all of the quests above to be able to accept the "[Season] Great Pioneer's Footsteps" quest, which you can complete to obtain the following rewards.

● Nova's skill name for Quoratum's Protection will now be displayed as "Shield Block Stance" in the Skill Guide UI to be more straightforward.

● You can now drag in the Crop Information UI.

● Changed the name of Easy Combat Mode to ""Combat Assistance"". Also made the description in the game settings window to better fit the change.

● Fixed the issue where the Truffle Mushroom at Secret Cave could not be gathered.

● Fixed the issue where you could not play an intrument even though you were not on a mount.

● [Guardian] Fixed the issue with her Noel outfit looking abnormal when her gear durability drops.

● Fixed the issue where the skill cooldown would appear abnormal after the loading screen.

● Fixed the issue where Nova would get out of combat stance when her main weapon or sub-weapon is selected in the Dye window.

● [Nova] Fixed the issue where her skirt appeared abnormal from a distance if she was wearing Rebar Armor or Armor of Hercules'.

● [Nova] Fixed the issue where the sword on Serendian Soldier Suit appeared to bend.

We hope you enjoy your time in Black Desert, thank you.