Here are the updates made to Black Desert on January 13 2021. 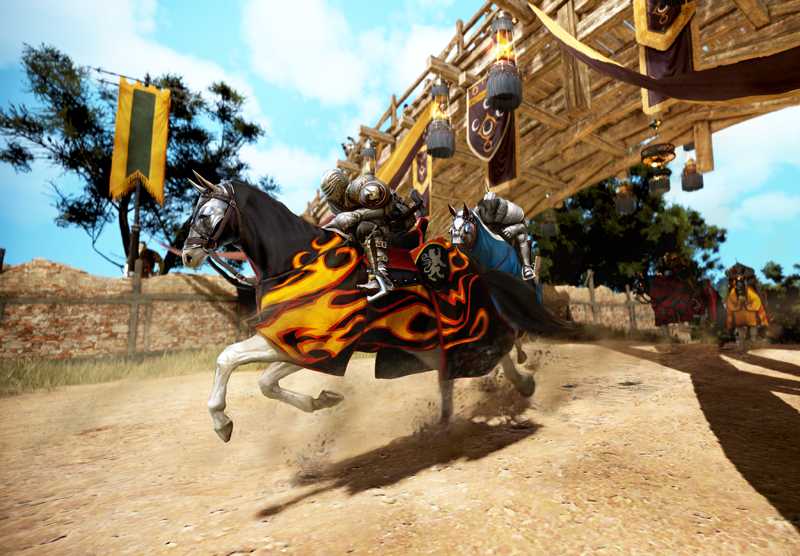 - Old Moon Grand Prix is a horse race content where 5–10 adventurers compete against each other in a racetrack.

- Anybody can join the race by using the new race horses. We hope the races are an enjoyable competition for our adventurers.

- You can participate in the Old Moon Grand Prix any time between during 9:00AM–2:00AM UTC.

- Old Moon Grand Prix is not open during Node/Conquest Wars."

- Unlike stable from before, you can keep up to maximum 5 race horses in the stable as it has 5 slots.

- Race horses begin to gradually pick up speed as it sprints. It will reach its height if you can maintain sprint for a certain period of time.

- Every race horse has their own unique ""Power of Wind"" and a gauge that will slowly charge as you sprint and drift in the race.

- Large amounts of ""Power of Wind"" can be charged while drifting as long as you can. Short drifts will slower down the speed of the horse so use it with care.

- Once the ""Power of Wind"" gauge becomes full, ""Sweeping Movement"" can now be activated. When used, it will immediately propel the horse into a fast frontal sprint.

- Use the ""Power of Wind"" and ""Sweeping Movement"" as a strategy to win the race.

- Race horses are handled differently than normal races. See below for the controls.

- Balenos: Velia Coastal Cave has numerous curves and obstacles making the use of drift and obstacle evasion very important to win the race." 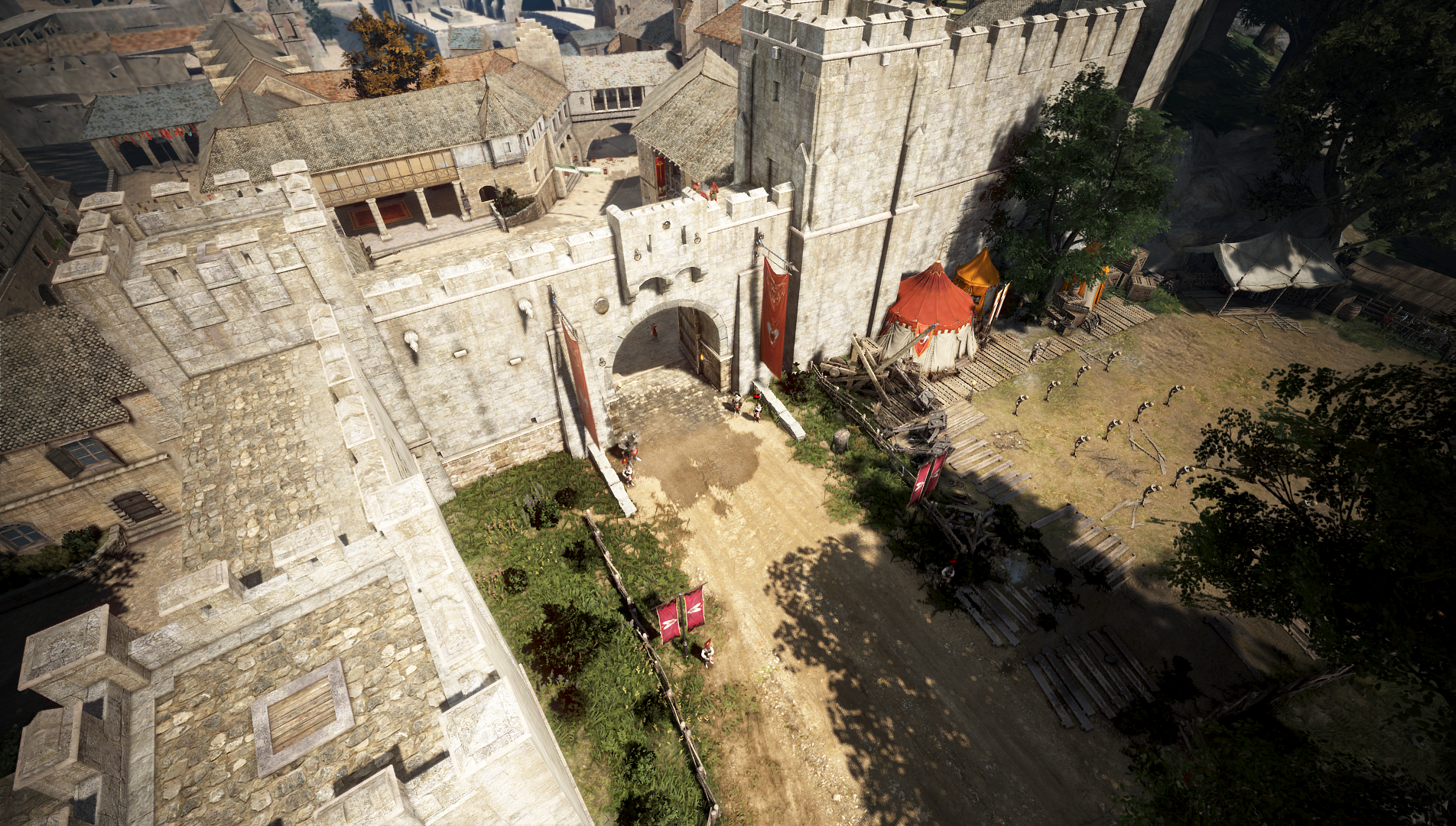 ● Follow the steps below to participate in the Old Moon Grand Prix race:

- ESC menu → Life → Select Old Moon Grand Prix menu or press the Race Icon on the top-right side of the screen to participate in the race.

- Register the race horse emblem in the stable, enter the racetrack and speak to Stable Keeper "Miles" to get ready for the race." 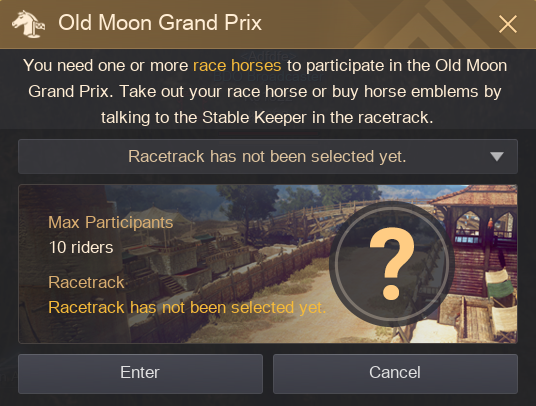 - If there are less than 5 participants, the race will be cancelled and you will be forced to exit back to the racetrack.

- If there are 5 participants or more, the waiting time will end and 1 minute will be given to allow preparations for the race.

- The Grand Prix race will begin once the preparation time is over."

- If you have gone on the wrong path during the race, you can come back to the racetrack by clicking the ""Escape"" button top-left side of the screen.

- Race Winners will be ranked in the order they come into the finish line after passing all the check points.

- 1st, 2nd, 3rd Place in the Grand Prix will be granted the honorable Grand Pix Gold, Silver, and Bronze Trophy.

● Rewards for winning the Old Moon Grand Prix are as following:

* Grand Prix Trophy is an item that represents the Rider's honor and achievements in the participating race. Each trophy can be exchanged into a rewarding item depending on its tier.

- Riders that have participated in the Old Moon Grand Prix can receive various rewards depending on their weekly performance in the race."

● Old Moon Grand Prix Coins are rewarded as a prize after the race depending on how you were ranked.

- Stonetail Wind's Meal shares the cooldown period with Cron Meal and the two cannot be overlapped to extend time." 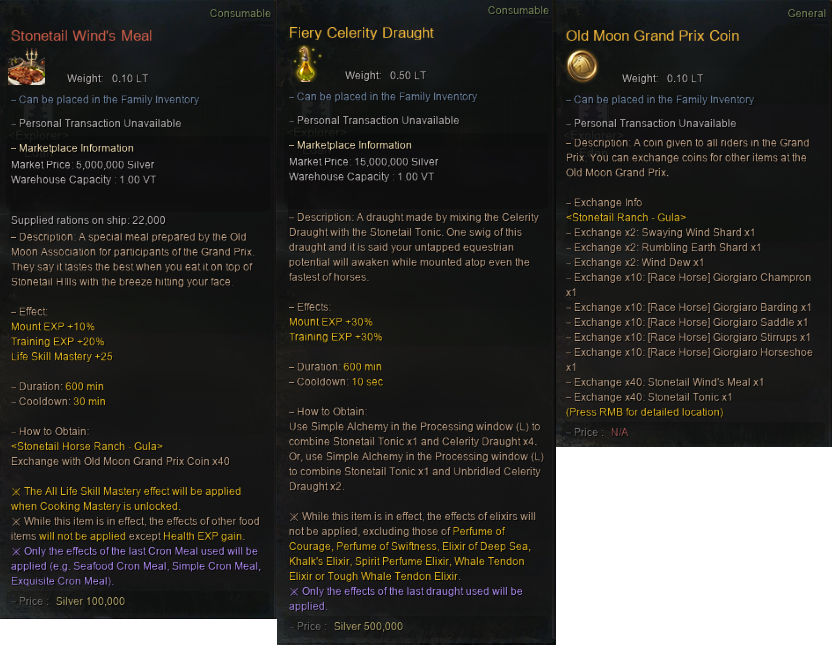 * [Season] Frost Leaf can be obtained from the rewards obtained by participating in Old Moon Grand Prix.

- You'll obtain ""[Season] Frost Leaf"" x1 regardless of variations of the box.

※ All remaining ""[Season] Frost Leaf"" in your inventory will be deleted once the Winter Season is over. It will no longer be obtainable from the Old Moon Grand Prix reward boxes.

- Horse gears can be enhanced up to +10 enhancement level with ""Gale Blackstone"", . 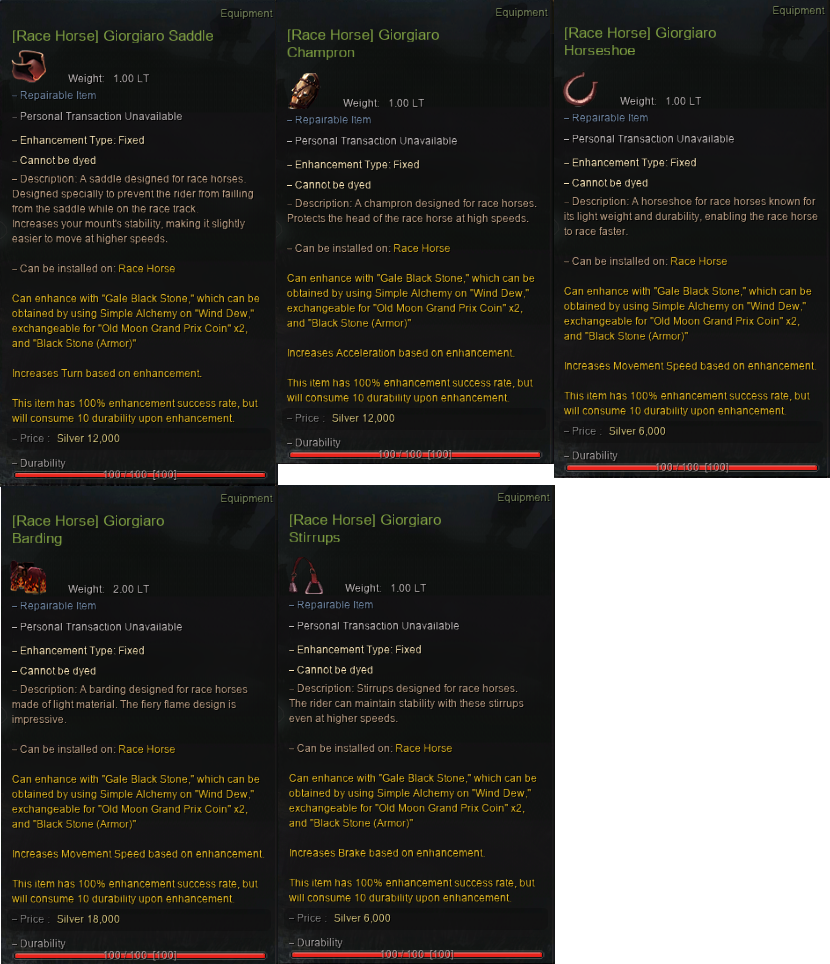 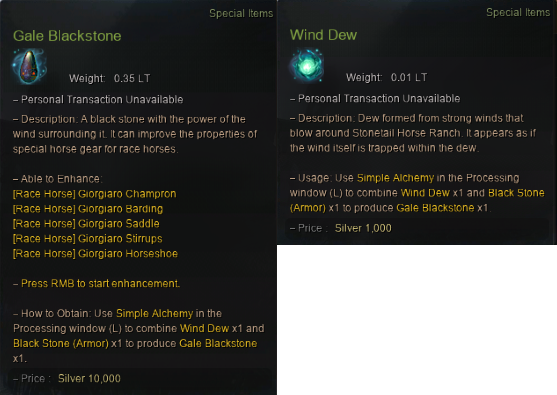 ● Added new titles that can be obtained in the Old Moon Grand Prix.

● Added daily and weekly quests that can be completed with Old Moon Grand Prix Coins.

- To show our thanks to adventurers with Black Spirit Gold, Silver, and Bronze icons, we've prepared a 90 day temporary special title for you.

- Hall of Adventuers Chat Group will be opened to Adventurers across 20 channels who have acquired the Black Spirit Gold, Silver, and Brzone icons."

● Rumors of a mysterious traveler has arrived in Velia. Accept quest ""[Season] Pollak the Strange Traveler.

[Season] Refreshed by the Smell of Flowers

[Season] A Back Bent by Time

[Season] End of the Strange Journey

- Receive the rewards below upon completing the quest:

● Storming Star – Fixed the issue with the last hit activating a skill regardless of enemy direction despite having the Combat Assistance system turned on.

● Fixed the issue of Morning Star being shown when attacking immediately after Rage Absorption.

● Fixed the issue of Morning Star being shown while opening a treasure chest when equipped with main weapon.

● Changed character motions to automatically convert to a fall motion when Jump Attacking from a high place.

● Changed posture for when the character is in Main Weapon Combat Stance.

● Quoratum's Opening – Changed so that Sprint is activated first when holding Shift + W after the skill.

● Quoratum's Opening, Punishing Trap – Fixed the issue where the character would Jump when passing by a hilly area during Charge.

● Fixed the issue where Quoratum and Morning Star were invisible when doing the Fighting Spirit, Confident, or Flirt social action while holding the Sting.

● Fixed the issue where Quoratum and Morning Star appeared abnormal during a fall motion.

● Prime: Icy Prison, Prime: Stamma's Mate – Fixed the issue where breath effects would remain on Axian even after moving on to a different combo after using these skills.

● Prime: Frozen Darkness – Fixed the issue where the skill's Down Attack effect was not being applied.

● Fixed the issue where Succession skills would not lock properly.

"● Prime: Fianchetto I – Fixed the issue with the skill becoming available to learn when only having Command: Fianchetto IV.

- Adventurers with Skill Presets that have the issue above will have their Skill Preset reverted but will also receive Armstrong's Skill Guide (1 Day) & Cliff's Skill Add-on Guide (1 Day) to compensate for the changes."

● Succession: Quoratum's Opening – Deleted movement distance reduction on the skill while on cooldown.

● Prime: Storming Star, Frozen Darkness – Improved combo to allow Prime: Swooping Ring and Quoratum's Ascension to be used immediately after the last hit of these skills.

● Prime: Frozen Earth – Improved combo to allow faster use of Icy Fog after using the skill.

● Prime: Passed Pawn – Fixed the issue where the guards did not automatically attack the enemies near Nova upon learning the skill.

● Command: Opening – Fixed the issue where the skill was not activated even when having successfully blocked an attack while using Quoratum's Protection after Succession.

● Prime: Star's Call, Prime: Swooping Ring, Prime: Quoratum's Ascension – Fixed the issue where the guards would not be summoned when moving on to a different combo even when Quoratum's Protection is activated after these skills.

● Changed so that the summoned star from Star's Ring disappears when there are Wooden Fences or Barricades nearby.

● Changed Royal Fencing: Lunge so Combat Assistance no longer applys to this skill.

● Fixed the issue where cooldown period would not apply in certain situatinos when using En Garde through Accel: Swooping Ring.

● Fixed the issue with Royal Fencing: Fleche and Frozen Ring where it had abnormal camera effects in certain motions.

● Fixed the issue where hitting in max distance for Comet I – IV would not apply the Knockdown effect.

● Improved Accel: Swooping Ring by allowing it to be discharged towards the camera direction after using it as combo with other skills.

● Improved attack range of the skills below:

● Added below effect for Royal Fencing: Fleche I – III.

- HP recovery +15 on each hit (Not applied during cooldown)"

● Added below effect for Royal Fencing: Remise I – III.

● Added below effect for Star's Call.

- Pulls in target on hit (PvE Only)

● Changed Royal Fencing: Lunge to be discharged in the camera direction after using the skill.

● Improved Quoratum's Guard so that it can be used while holding the Sting.

● Improved Royal Fencing: Riposte so that it can be used as combo during Quoratum's Protection.

● Fixed the issue with Royal Fencing: Fleche I, II, III so that 1st & 2nd hit no longer applies stun as stated in the skill description.

● Fixed the issue where Awakening skills would occasionally not activate despite correct command keys.

● Changed item drop conditions for ""Life-bearing Wind"" so that it is dropped when defeating hunting monsters, not through butchering.

● Specter's Energy has permeated into the Shultz Guards.

- Specter's Energy can be obtained by defeating any kind of Shultz Guard.

- There is a higher chance of obtaining Specter's Energy when defeating Kunga of the Shultz Guards.

● Fixed the issue with Miniature Elephants maintaining Quick Run during auto-navigation even when the saddle's durability has been reduced to 0.

● Fixed the issue where Mythical Arduanatt was able to continously spam Mighty Leap.

● Improved UI for the Compose menu.

● Added a new pop-up message in Find NPC UI when there are no saved Favorites, reminding you that Favorites can be saved in the World Map menu as well as a button to open the World Map.

● Added feature to remember a location or auto-navigate to hunting rounds.

- This function can be used at the Find NPC menu (Magnifying Glass icon).

- Designate a location by pressing RMB on the World Map and press the ""Save Location"" button register it as a bookmark. The location name is customizable but must be under 10 characters.

- Bookmarked locations can be checked out at the Find NPC menu (Magnifying Glass icon) at the left side of the mini-map or in the Find NPC function at the ESC menu.

- You can bookmark up to 5 locations.

- Select Hunting tab in the Nearest NPC menu to view a list of major hunting grounds, recommended AP, and an auto-navigation feature. 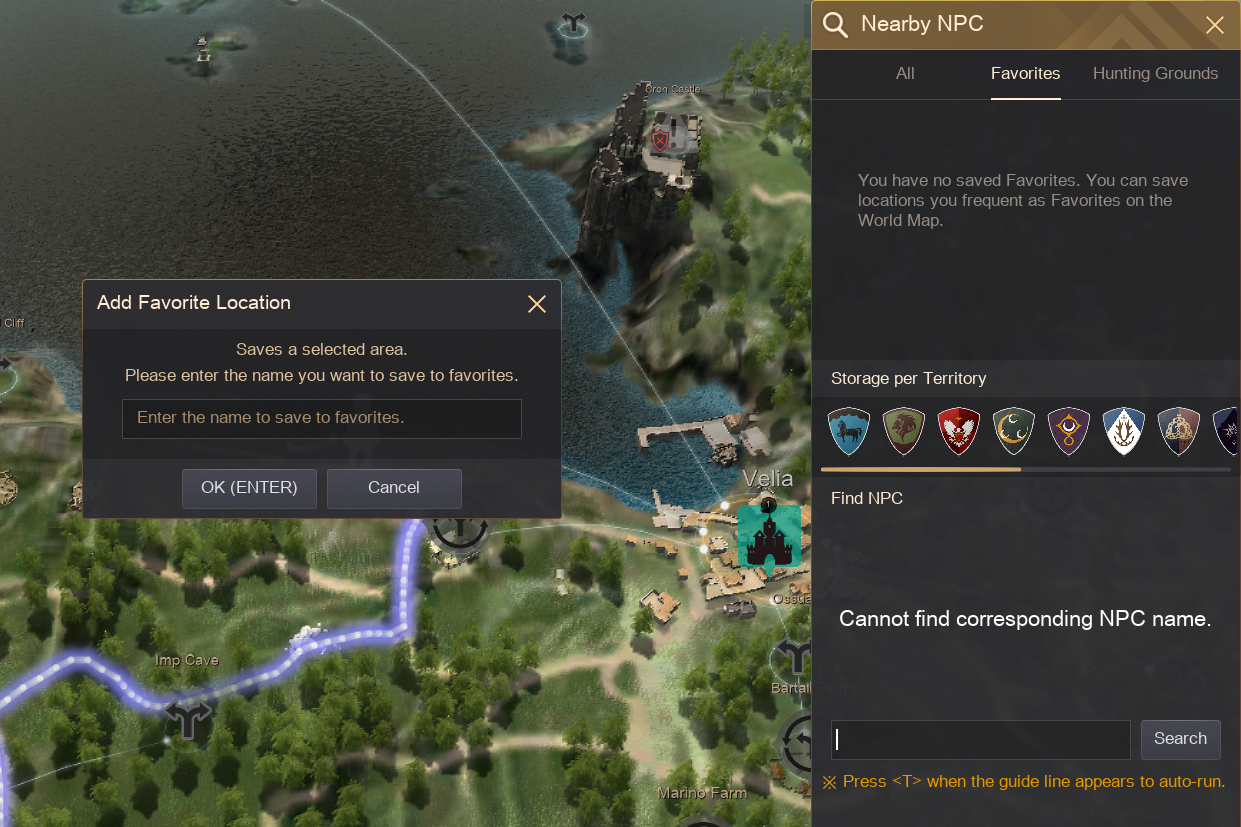 ● Added motions to all Pearl Outfits while in stand-by mode.

Made improvements to the flow of transactions made on the pack page.
- Added symbols for currency besides Acoin.
- Improved the transaction process when buying packs with Acoin.

● Fixed the issue with monsters near Bloody Monastery at Serendia being unable to move beyond a certain terrain.

● Fixed the issue with Black Spirit flickering in the main quest widget when new adventurers progress in the tutorials.

● Removed unnecessary logging while the client is running.

● Fixed the issue where effects would not appear when equipping [Nova] Santa Hat (E).

● Fixed the issue where dyes would not be applied to Sephia Helmet with Nova while customizing appearances.

● Fixed the issue with dye colors changing for outfits when Nova switches to Awakening Weapon while Main Weapon is out.

● Improved UI to display a clear yellow ping on mini-map when the Mysterious Knight appears.

● Decreased the distance at which the message "You hear the loud noise of hammering nearby" is displayed when Lost Nux appears.

● Fixed the issue where the dye would be undone when Awakening after equipping [Nova] Calpheon Noble Dress.

● Fixed so that the size of the image which is displayed when selecting Nova Succession/Awakening is normal.

● Fixed the issue where Nova could not accept female class exclusive quests.