Event 1. Plump Yourself Up with Plump Pufferfish!

● New adventure log, "Fughar's Times of Success", has recently been published. Follow the trail of Fughar and how he became a successful Chief Manager in the Crow Merchant Guild with nothing but an apple in his hands.

- Upon completing the Mediah Main Questline, if you're Lv. 57 or higher, you can accept the quest "Adventure Journal: From the Bottom to the Top" by talking to the Black Spirit.

- This adventure log consists of 3 volumes, with 5 chapters per volume for a total of 15 chapters altogether.

- You can use Fughar's Secret Book, a secret text of the Crow Merchants Guild, to gain a large amount of Contribution EXP.

* If your maximum Contribution Points (CP) shared by your Family is 200 CP, once you complete all of Fughar's Times of Success, you will be able to increase your Family-wide CP to 230 CP. 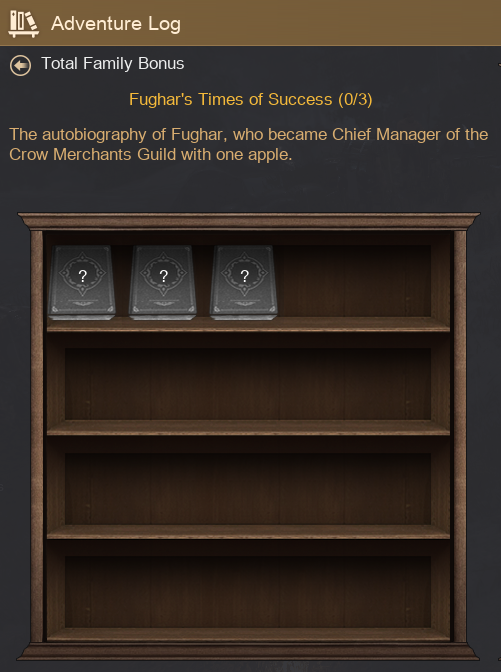 Contribution Points (CP) are an absolute must to fully enjoy the various, deep content of Black Desert. However, to attain a decent amount of CP requires a large investment of time, and many novice adventurers may feel daunted by this prospect when playing Black Desert for the first time. To address this issue, we added "Fughar's Times of Success" as the 12th adventure log. By following the footsteps of Fughar, who made a name for himself with his own two bare hands, you will find that you've accrued quite the Contribution EXP upon completing this log.

We're changing the rules of Black Spirit's Adventure. When we first revamped Black Spirit's Adventure, we added a variety of devices in hopes to increase not just the fun factor but its strategic element as well. However, in this process, we realized that we had forgotten a rather important thing - that is, the emotions wrought by failure. The original Black Spirit's Adventure had no real consequence for failing to reach the finish square, but while focusing on revamping the board, we neglected this important part. And so, today's update will remove the "Failed to Finish" option entirely, revamping the board to now allow for anyone to enjoy without fearing to fail. In light of this change, we've also enhanced the rewards for successfully completing a round. We were originally planning to reset all "Rewards for Additional Rounds Completed", but after looking at the in-game statistics, we discovered that many adventurers had yet to use their dice. And so, the actual reset for number of additional rounds completed is scheduled for 2 weeks later on March 24. You'll be able to try your hand once more to win all the rewards for additional rounds reset back from 0, and we also plan to add rewards for additional rounds completed up to round 75.

※ When the number of completed rounds are reset on March 24, you will be returned to the START square.

● Changed the rules for Black Spirit's Adventure. Now there is no penalty for failing to reach the finish square.

- Removed "Rolls to Finish", which stood for the number of dice rolls left to reach the FINISH square from the START square.

- Removed "Failed to Finish" with the removal of "Rolls to Finish".

- Removed the "Lucky Day" Arcana cards, which added additional rolls to finish, with the removal of "Rolls to Finish".

- Issued Black Spirit's Dice to compensate the type of "Lucky Day" Arcana cards in your possession.

- If you have any unopened Arcana of Fate Boxes, when you open the box after the update, all Lucky Day - 1, 2, 3 Arcana cards will be deleted and replaced with 6 Black Spirit's Dice.

- Removed the limit of additional rolls after rolling the same number on both dice. 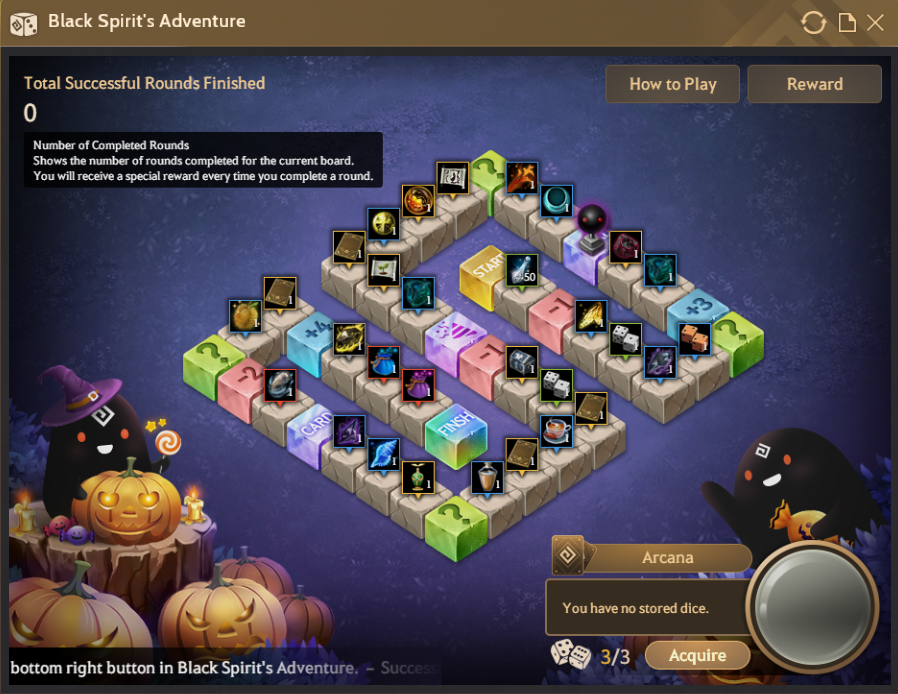 ● Enhanced the rewards based on additional rounds completed. 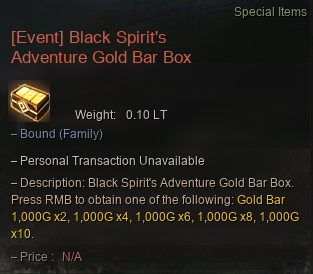 - Whether your piece is on the normal or event board, all boards will increase your Number of Completed Rounds by 1 when you successfully move your piece from the START square to the FINISH square.

* Thus, the once separate numbers of successful rounds finished for normal and event boards will be combined hence forward.

● A new season of the Old Moon Grand Prix has begun.

- Beginning with the new season, you will gain points for every race you run, and your overall ranking will be updated depending on the points you accrue.

- Selecting a race course in the Old Moon Grand Prix Race Info window will display your personal records pertaining to that course.

- Personal records will display your best time and number of times you completed that specific course. 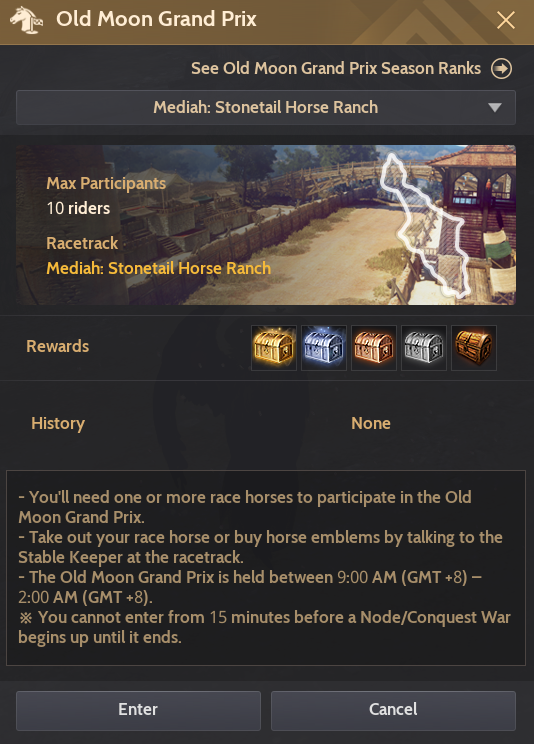 - You can see your rankings by season, race course, and ranking type.

- Ranking types are divided into Overall Ranking and Record Ranking. More details regarding the types of ranking are as follows:

- You will gain the following number of points based on your rank.

- For more details on the Happy Black Spirit buff, please refer to [Thanking Adventurers in Over 150 Countries Worldwide].

● Succession: Magical Evasion - Made the skill to be registered in the Skill Cooldown Slot.

● Equilibrium Break - Changed the skill's graphical effect only for Remastered mode or higher.

● There's news of some gossipy NPCs in each of the major city's taverns and inns offering interesting tales of this world. They talk of

- You can find details regarding Adonna Rioblanc's actual location by talking to the following NPCs located in the taverns/inns listed below.

- Once her parrot makes the announcement, you can return to Adonna Rioblanc, who will eagerly read your fortune without the need to accept a separate quest.

- Adonna Rioblanc and her parrot will return to their wandering ways when the time comes. Right before they set off on their journey, adventurers will be able to accept a quest from the parrot Borky, who will reveal their hidden story, and also reward you with Adonna's last gift and title, .

- However, Adonna does not wish to sour the still-bright futures of adventurers who are below Lv. 30, and will refrain from reading their fortunes.

- You can now use the Gamepad Exclusive UI if you select ""Use Gamepad UI"" after activating gamepad by going to Settings -> Select Use Gamepad.

- New control settings will be assigned to the player when using the Gamepad Exclusive UI and you'll see that the changed UI is identical to the one that can be seen in Black Desert on console.

- Ring menu, World Map interface for gamepad, and other UI features will be optimized for gamepad but controls are not customizable.

- Each class's skill cast and controls will be optimized for gamepad. However, commands to perform combos are identical to PC configurations.

- PvE is much more readily accessible if you play with gamepad UI and turn on Combat Assistance at the same time.

- Gamepad Exclusive UI allows basic controls needed in the game to be performed through the gamepad. However, a keyboard and mouse must be used when using Central Market and certain other UI features.

- You can switch between Normal Gamepad Mode and new Gamepad Mode (that uses a Gamepad Exclusive UI) without losing the control settings you've set into place."

Find out more information on the gamepad by reading the [New "Gamepad" Manual].

● Improved interface by allowing Elvia Main Weapon and Awakening Weapon to be instantly equipped by the Better Gear Widget at the top-right side of the screen without having to open inventory.

- When the time on is up on Elvia gears, the Widget will appear again to allow adventurers to instantly equip their original gear.

● Fixed issue in Pearl Shop so that when adventurers select product that spans over different classes, the demonstration screen on the right side displays class that the adventurer is currently using.

- HP is now displayed to the second decimal places when using replay features.

- Each team's HP can be checked through messages at the end of the match when using replay features.

- Fixed issue where Guild Emblems would not disappear even after character has been defeated when using replay features.

● Expanded target features in knowledge to work both for individual subjects as well as knowledge categories. Any subject under the selected category will be highlighted on the mini-map.

- Target feature can only be used if the selected categories does not include other categories (Only contains individual knowledges).

● Fixed issue where you could run multiple clients under certain circumstances.

● Fixed issue with interference in character movement near Caduil Forest.

● Fixed issue where adventurers could pass through the pillars of Epheria Sentry Post.

● Adventurers are now led to a high resolution in-game video clip when pressing LMB on the gameplay video clip button at the bottom of the screen while creating a new character.

● Fixed issue where the Giant Mudsters, when spawned twice consecutively as a Field Boss, would appear in locations before the change rather than appearing in the changed locations (Southern plains near the Swamp Fogans habitat, Triangle Head Lizard habitat).

● Fixed issue where the character's left fingers would overlap with the weapon when equipping [Guardian] Glorious Shudad.

● Fixed issue where portions of the mesh would be exposed abnormally when equipping [Berserker] Mountain Guardian Spirit while Body Shape is max size.

● Fixed issue where instrument would not be visible when summoning Shai to perform music.

● Fixed issue where instrument would not be visible to other adventurers when playing as Shai to perform music.

● Fixed issue with inappropriate background music being played at the Altar of Blood.

● Fixed issue where Console Gamepad Dingbat font could not be expressed in Gamepad Settings.

● Fixed issue in Black Spirit's Adventure where sounds could not be heard when moving on a square.