There’s been sightings of Sage’s Ancient Kyve around the world of Black Desert. It’s said that interacting with this mysterious object grants you a +300% Skill EXP buff.

And it seems that Sage holds the secrets to unlock its true potential...

① During the event period, the [Disassembled] Ancient Kyve will appear around monster zones.

② Interact (R) with the [Disassembled] Ancient Kyve and select ‘Approach the Kyve.’ to receive a ‘Skill EXP +300%’ buff.

- This buff has a duration of 180 minutes, but the [Disassembled] Ancient Kyve will disappear 30 minutes after it first appears. 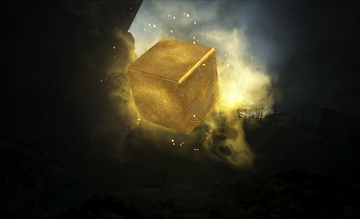 ③ With the Sage class, you can power up the [Disassembled] Ancient Kyve into the [Rumbling] Ancient Kyve to receive a stronger buff.

Tip! If you’re playing the Sage class, try interacting (R) with the [Disassembled] Ancient Kyve and select the “Extend your hand onto the Kyve.” option.

④ Interact (R) with the powered up [Rumbling] Ancient Kyve and select ‘Approach the Kyve.’ to receive a Combat EXP +100% and Skill EXP +300% buff.

Details Regarding the Ancient Kyve’s Buff

- Only the event buff from the most recent interaction with the Ancient Kyve will apply.

- If you receive the same buff while it is already active, the buff’s duration will be refreshed.

E.g.) If you re-acquire the buff with 50 minutes remaining on your existing buff, then the duration time will be refreshed to 180 minutes.

* The event buff is the same buff as the one from the Mysterious Knight, Ynix’s Flame, and Sandstorm.

- This event is active on all servers.

- This event’s buff will stack with the permanently on-going Skill EXP buffs on the normal server.