Here are the updates made to Black Desert on June 8 2021.

Event 2. BLACK DESERT X BUGATTI: A Collaboration Comparable to None

● Flashing Light - Fixed the issue where the backward movement of the skill would be shorter if it was used after hitting Bloodthirst: Katana Shower.

● Shout to the Sky III - Changed the following buff effect to not stack.

● Succession: Arid Assault - Fixed the issue where the Bound effect was applied even when the skill was used while on cooldown.

● Changed the Overcharged state to no longer apply for skills used on cooldown. Consequently, the following skills' descriptions have been changed.

● Bolt - Fixed the skill to now display the beginning animation when used during the Overcharged state.

● Changed the item description of Treasure Map of a Sailor to say "Press RMB to use".

● Changed the item description of Treasure Chest of a Sailor to say "Press RMB to use".

● Changed the item description of Material Box for Some Ship to say "Press RMB to use".

● Fixed the quest descriptions for [Daily] Ravikel's Test and [Daily] For the Serendian Soldiers.

● Added Impeccably Polished Stone and Fine Black Stone Powder to Node/Conquest War, which can be used to repair Fort/Command Post/Field HQ for a greater amount of durability.

- All Fort/Command Post/Field HQ consume 1 item to repair, and requires the same amount time to complete.

● The max durability and DP increased for Node/Conquest War Fort/Command Post/Field HQ and other annexes including Flame Tower/Hwacha are as follows:

● Added the mount's tier show in the list for mounts available for Mount Delivery/Transport Mount in the Stable. 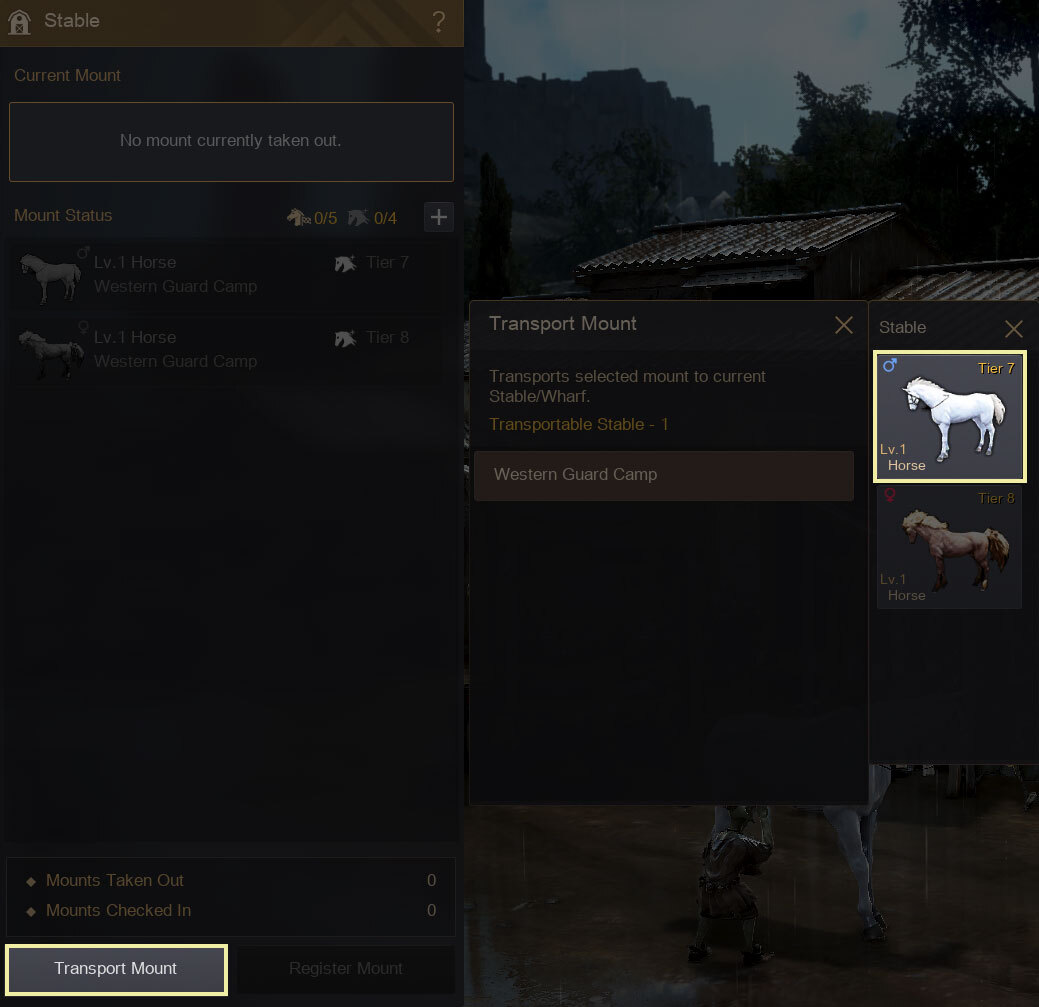 ● Changed Black Spirit's Adventure to now be usable with a gamepad.

● Changed the cursor's default position to hover over "Repair Equipped" when using the repair function at a campsite for the Gamepad UI mode.

● Added Barter to be set in the Ring Menu for Gamepad UI mode.

The rules regarding how prices adjust in the Central Market have been changed. Currently, weapons are considered as a single item (Group) regardless of class. But even after the update on April 21, there was an issue where the market price could change drastically if the prices of certain weapons increased compared to the standard price. As a result, we've changed how prices for the same weapon fluctuate by making the price vary depending on the amount traded so that the price of the same weapon does not change according to specific transactions. Furthermore, for items with a high value (price of 20 billion silver or items listed below) at the current standard (as of June 7), we’ve changed the said items to appear 15 minutes after being listed on the Central Market and for a World message to appear at the same time. (If said item has a pre-order, a separate notification will appear. The wait time for the items may take from 14 to 15 minutes.)

Lastly, we are developing additional authentication steps using features such as OTP for listing or buying items above a certain price on the Central Market. Unfortunately, we were not able to introduce them today, since we required time to implement and test them, but we are doing our best on developing it. Additionally, if we see that this patch falls short, we will look into making exceptions on how price changes for certain items.

● Added a delay of approximately 15 minutes when listing certain items and items with a Set Price of 20 billion Silver or higher on the Central Market before they become available for purchase. 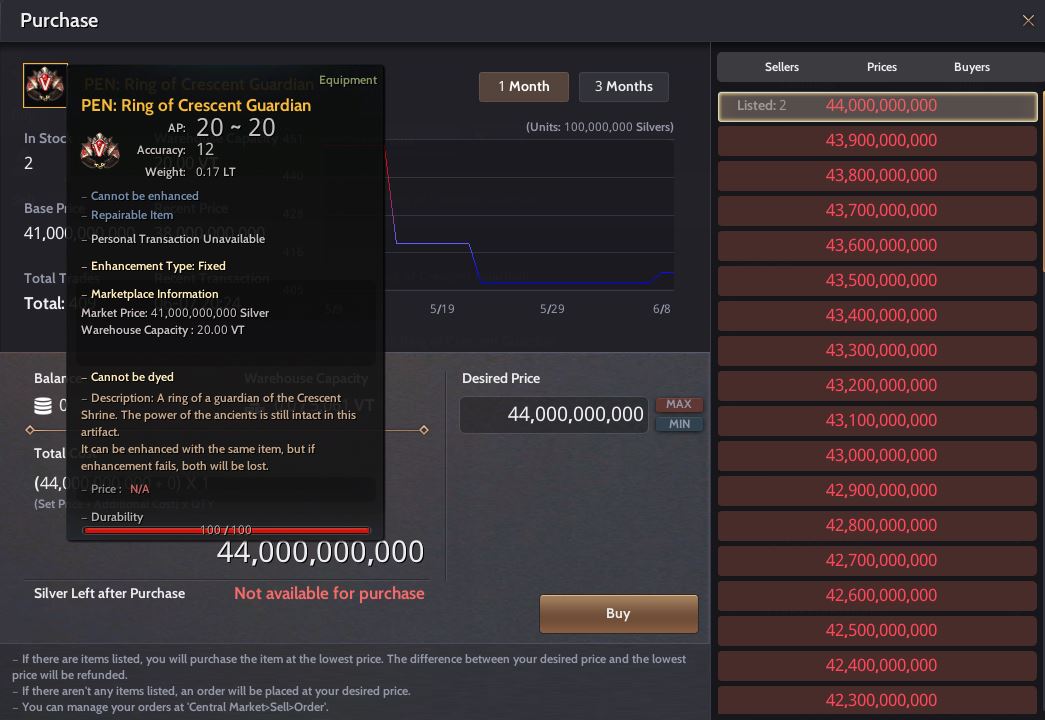 - Once certain items including those with a Set Price of 20 billion Silver or higher are queued to be listed, all Adventurers will be alerted by a notification displayed on the upper middle part of the screen.
- To ensure a safer exchange, orders for certain items (including those with a Set Price of 20 billion Silver or higher) placed by (Waiting) Adventurers at the same price, but not necessarily at Max Price, will be carried out not by a first-come basis but in random order.
- If the item failed to be listed, the item itself will be returned to your Central Market Warehouse.
- You will need to wait approximately 1 minute before you are able to relist an item that failed to register after the 15-minute wait time.
- If an item you placed a pre-order for is placed in the queue, you will see a UI displayed on the bottom right-hand part of your screen displaying the relevant item name and listed time.
- Once the queued time is over, the item's transaction will be carried out just as before.
- You can only list 1 item with the same name and enhancement level at a time.
- The aforementioned rules will also apply to the following items even if their Set Price is not at 20 billion Silver or higher:

● Fixed the Pearl Shop to display the main item of a pack if it contains selectable items.

● Fixed the issue where you couldn't click to select your server when using the Central Market on Internet Explorer.

● Changed the following term in English:

● Changed Ibedor's Scroll to now proceed independently from other scrolls when multiple parties activate the scroll at the same time.

● Fixed the issue where the topography of Padix Island appeared awkward on the World Map (M).

● Fixed the issue where part of the background in the following region appeared awkward:

● Fixed the issue where ships would get stuck in certain parts of Ginburrey Island.

● Fixed the description text for coupons in the Pearl Shop to no longer bleed out of the UI.

● Fixed the issue where the quest reward icon would either not appear or display the incorrect icon while proceeding with the "[Elvia Co-op] Kzarka: Barrier of Infestation III" quest.

● Fixed the issue where a daily pearl shop deal would sometimes appear without the discount on days it is not supposed to appear.

● Added the ability to now scroll with your gamepad while using the mount's View Inventory function in Gamepad UI mode.

● Fixed the issue where detailed information of certain items wouldn't be displayed while using the mount's View Inventory function in Gamepad UI mode.

● Fixed the mouse-only close button to no longer display while using the mount's View Inventory function in Gamepad UI mode.

● Fixed the issue where certain inputs would cause both the View Inventory and Change Skill windows to appear at the same time while using the mount's View Inventory function in Gamepad UI mode.

● Fixed the issue where the detailed information wouldn't refresh while scrolling through the mount's View Inventory window in Gamepad UI mode.

● Fixed the issue where hovering your mouse over abbreviated text of a Pearl Shop coupon's details on where it can be used wouldn't display the detailed information.

● Fixed the message displayed when attempting to call a guild elephant from outside the possible range while with a Celestial Horse Calling Horn in your inventory to read less awkward.

● Fixed the issue where attempting to move an item to the Central Market warehouse after deactivating Item Copy would display an abnormal message and prevent the item from being moved.

● Fixed the scroll of the Inventory UI of mounts that are checked-in.

● Changed the key guide for the Show/Hide Mount Inventory in the Load Cargo window to not be displayed while moving items.

● Fixed the issue where an unselected mount's View Inventory window would appear in the Stable UI.

● Fixed issue where the key guide for Forest Path Wagon would appear when it is in a different town/city in Gamepad UI mode.

● Fixed issue where the key guide for Forest Path Wagon could be opened when it is in a different town/city in Gamepad UI mode.