Following the 2020 Spring, Summer, and Winter seasons, comes the advent of the 2021 Summer Season! Kick off the first season with Corsair, the newest class to debut on Black Desert this June 29!

This season is sure to bring a wave of excitement to all Black Desert Adventurers, whether you are a rookie or a veteran Adventurer! (๑>ᴗ<๑)

But what lies in store for the 2021 Summer Season? What’s new? What’s different?

Check out the GM Note to find out more!

For those of you who are unfamiliar with season servers in general, have no fear! The [Adventurer’s Guide] Season FAQ will explain the basics of the season servers!

1. How to Create a Season Character

Once you’ve logged into Black Desert, go to the Character Selection screen and press the [+] button to see all of Black Desert’s many classes. If you want to learn more about each class, make sure to check out the [Class Introductions]! 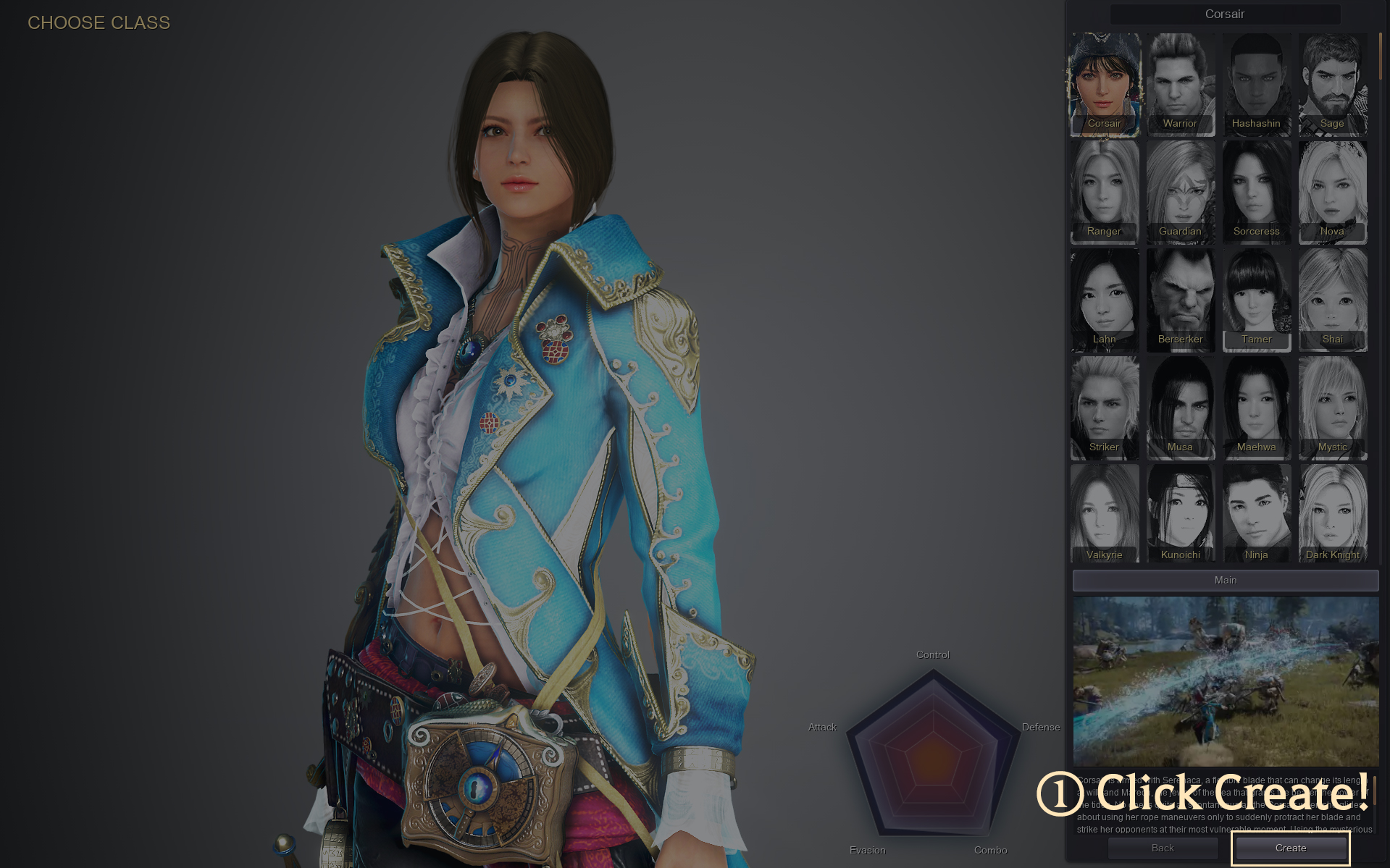 Have you figured out which class you want to play? If so, once you’ve customized the character to your liking and decided on a character name, check the “Season Character” checkbox and click Create! Now you’ve successfully created a season character! (You can only make one season character per season!)

Season characters and servers have a lot of perks! Let’s learn about them below.

First off, season characters receive special level up rewards every time they reach a certain level. The 2021 Summer Season offers a variety of rewards, including Adventurer Shoes and enhancement materials, that will help you progress and get even more rewards!

Every time you reach a certain level or achieve a certain requirement, you will obtain a Leveling Aid Box for each level. Not only will there be the Combat/Skill EXP buffs, but there are also Time-filled Black Stone and Inventory Expansion Coupons!

All these perks are intended to boost your character progression! 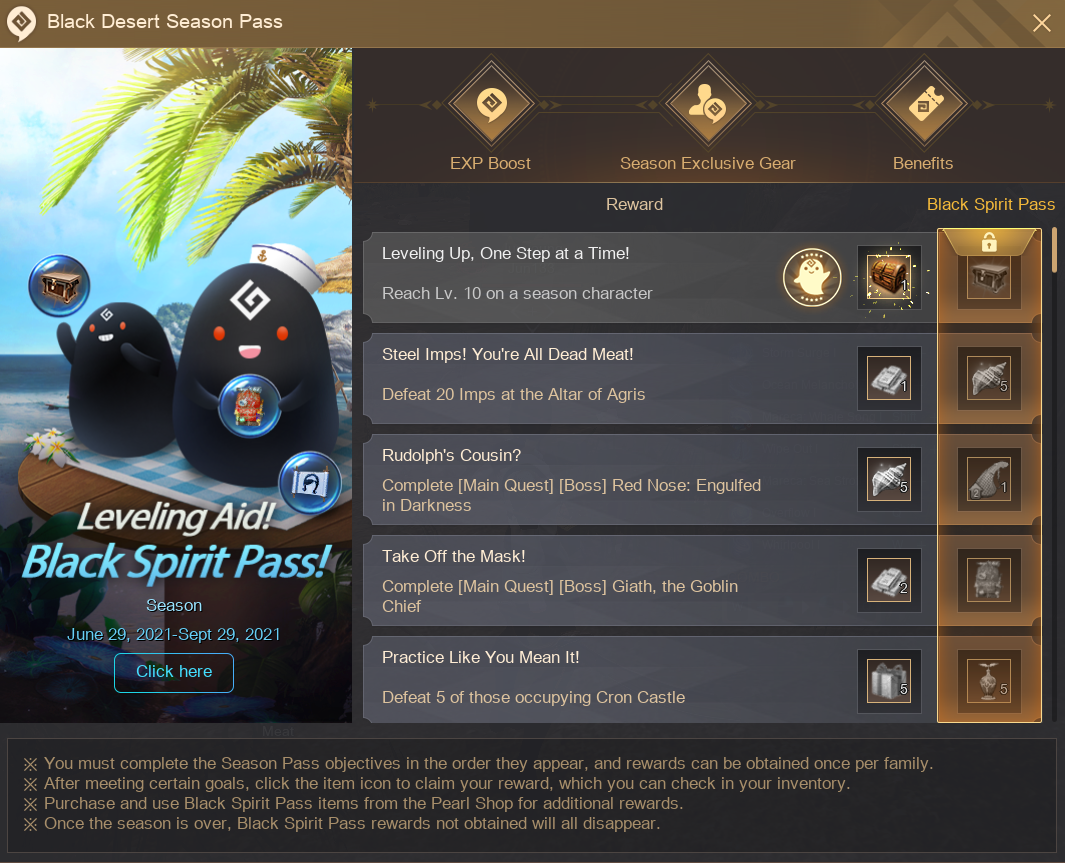 The Season Pass can be accessed from the Black Spirit button at the left of the minimap. This Season Pass is meant to support our Adventurers as they progress and is only available in the season servers.

Make sure to get all the Challenge rewards in the Season Pass as they will definitely aid your character progression!

Check out the [Event] Season Pass notice for more information about the Challenges and rewards!

* If you progress through the simplified main questline, you can talk to the Black Spirit to receive the “Normal Season Pass” rewards after completing a quest.

Tuvala Gear is a special kind of equipment that can only be equipped by season characters! There are two main ways to obtain Tuvala Gear.

Adventurers who have finished their journey in the summer season servers can expect a special reward to prepare them for the normal servers!

Once you graduate, you’ll receive one of the items below through a Season Special Gift Exchange Coupon. (You can only receive each special reward once per Family. If you’ve claimed it before, you can’t receive it again!)

* Adventurers who missed out on a previous season reward can select it and exchange for it this time around!

We’re happy to announce that the special reward for this 2021 Summer Season is the PEN (V) Capotia Necklace that many Adventurers have been asking for!
From the first Season in 2020 until the 2021 Summer Season, this kind of “special reward” has been one of the ways we’ve tried to help new Adventurers better adjust to the game.
After the previous PEN (V) Capotia accessories and Perilla's Star, we were thrilled to so many Adventurers eagerly waiting for this season’s special reward. ◡‿◡✿
As such, we wanted the 2021 Summer Season to also have a truly meaningful reward! Thus, we decided on having the reward be the last missing slot of the Capotia series -- the PEN (V) Capotia Necklace!
We hope this graduation gift will be helpful for all our new, returning, and veteran Adventurers alike! But there is one piece of unfortunate news; the PEN (V) Capotia Necklace will be the last special season reward, and we have no future plans to add more.
As the Season Servers continue on, new Adventurers will still be able to claim the special season rewards with a “Special Season Exchange Coupon.”
Although the special season reward will be ending here, we have development plans for boosting the appeal of the season servers and introducing more ways to help new Adventurers settle into the Black Desert world. Please stay tuned for our future announcements! (*＾▽＾)／

Upon graduating, you can open the Gift Box Full of Memories to receive a variety of items, including Cron Stones, Advice of Valks, and Secret Book of Old Moon, that will help you in your adventures on the normal servers. However, make sure you pay close attention to the [Season] Boss Gear Exchange Coupon that you can also obtain!

The exchanged Boss Gear is bound to your Family. It can be enhanced with Caphras Stone and even be made into Fallen God’s Armor. However, the Boss Gear cannot be listed on the Central Market.

We’ve heard all kinds of feedback and suggestions from Adventurers who enjoyed the previous Spring, Summer, and Winter Seasons. So, shall we see what’s new and different in the 2021 Summer Season?

* You can progress through the simplified main questline with a summer season character only once per Family.

* The simplified main questline will only be available while the season servers are active and will disappear once the season ends.

Adventurers who fulfill all the requirements and have completed the main questline up ‘till “The Sage of Velia” can accept the [Special Growth] Birth of a Prestigious Family quest from the NPC Alustin in Velia.

What if you created your season character as Class A, but now want to enjoy the season with Class B...?

Don’t worry! Because in the 2021 Summer Season, there is a new Season Character Transfer System that allows you to use “Fughar’s Timepiece” to transfer your season character status and Combat/Skill EXP!

* Warning! Quests that are in progress or completed on Class A will not be transferred to Class B!

Also, the Class B character that you wish to transfer the season character status to must be Lv. 25 or lower to be transferrable. (Class A must be connected to a normal server with all their gear unequipped.)

Did you start the Summer Season with guildmates or friends?

In this season, three areas were changed to “Party Monster Zones.” (Normal and season servers!) Take this chance to party up with your friends and stack up loot together!

* Once the Summer Season ends, these monster zones will revert back to their original state.

You’re now ready to head off to the Season Servers!