- The J's Hammer of Loyalty obtained with this coupon can be used until December 22, 2021 (Wed) maintenance, when all unused hammers will be deleted.

- You can only redeem this coupon once per family. 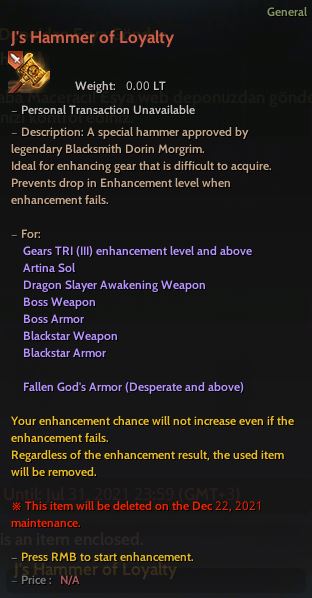 Event 5. Show Off Your Corsair!

● Pre-creation for the new class Corsair has begun.

- You can now pre-create and customize the new class Corsair.

- Increased the number of max character slots to 24.

- Increased the standard number of character slots from 5 to 6.

● Pre-creation for the Black Desert's newest Season, the Summer Season, has begun. 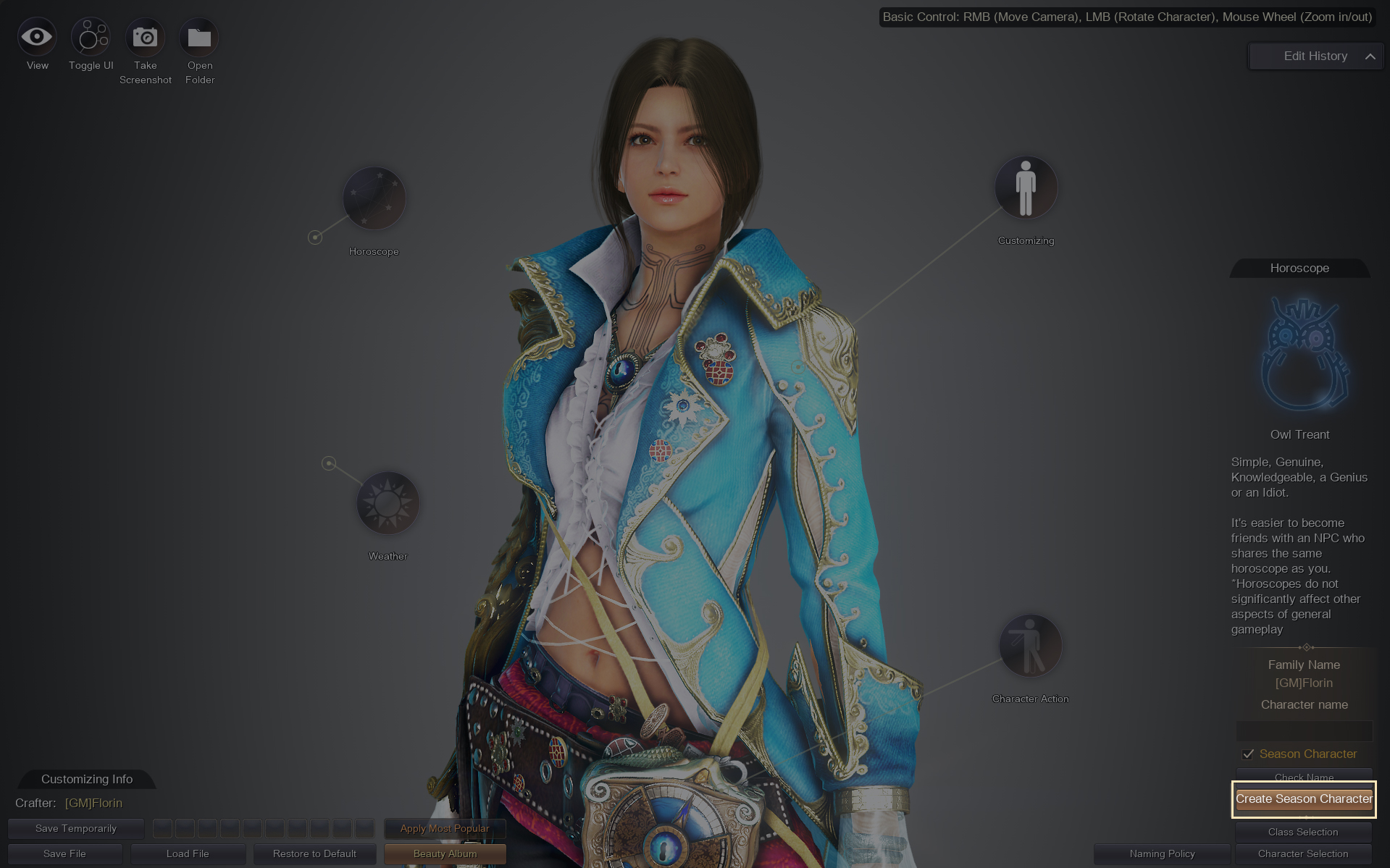 ● A new trade offer from the Old Moon Guild which requests the aid of Adventurers is here.

- Through the Old Moon Guild's Trade Offer, you'll be able to enhance one of the following accessories up to PEN (V), guaranteed:

- You will need a character who is Lv. 56 or higher to accept the quest "A Cry for Help". Talk to the Black Spirit and the quest will be in the Suggested quests tab.

- After you've completed the quest "Old Moon Guild's Trade Offer" from Jetina, you'll be able to choose one accessory from Narc Ear Accessory, Tungrad Earring, or Ring of Crescent Guardian

* This accessory is a quest reward and thus cannot be registered on the Central Market.

- Also, the aforementioned accessories have a guaranteed successful enhancement rate, and will not lose durability upon enhancement.

- The Old Moon Alchemy Catalyst can be purchased for 3.5 million Silver from an Old Moon Manager's shop.

- You must first complete Old Moon Guild's Trade Offer quest with NPC Jetina before you can accept the following quests.

- Only characters Lv.56 or higher can accept the following quests from Jetina once a day per family.

* You can only choose to complete one of either a Life Skill or Monster Hunting quest per day.

- You can accept the following "[Daily] Restocking Supplies" quests from Jetina:

- These quests require you to hand over the same type of accessory (either a Narc Ear Accessory, Tungrad Earring, or Ring of Crescent Guardian) you obtained for completing the quest "Old Moon Guild's Trade Offer" (accepted after completing the quest "A Cry for Help") that is enhanced to TRI (III) and can be registered on the Central Market.

For example, after you completed the quest "Old Moon Guild's Trade Offer," if you chose a Narc Ear Accessory as your reward, you will need to hand over a TRI (III) Narc Ear Accessory that's available to be listed/purchased on the Central Market.

* These quests require you to have the required accessory up to TET (IV) grade in your inventory (unequipped).

* You can complete this questline once per Family.

* Once you completed this questline, you will no longer be able to accept "[Daily] Restocking Supplies" or "[Daily] Old Moon Guild Subjugation Request" quests.

We've added the Old Moon Guild Trade Offer questline which can be completed by all Adventurers. Upon completion, you'll be rewarded either one PEN (V) Ring of Crescent Guardian, PEN (V) Narc Ear Accessory, or PEN (V) Tungrad Earring. Some amount of effort and commitment is required. However, there will be no time restriction to complete it and you will be guaranteed a PEN (V) accessory regardless. So, we hope that you take your time to complete this content.

Regardless of which accessory you pick first, you can change the desired accessory during the process (once per Family, and either when reaching TET (IV) or PEN (V) grade). For example, if you initially chose the Ring of Crescent Guardian and enhanced it all the way up to TET (IV), you can then change it to a TET (IV) Narc Ear Accessory or TET (IV) Tungrad Earring (but do so and you won't be able to change it again at PEN (V) grade).

● The hunters of Behr village are once again sharing reports of new and rare creatures to hunt.

- They say a certain squirrel has been sighted near an island where foghorns can be heard quite frequently. It's a tiny yet agile creature, and thus can easily be missed.

- Also, there have been reports of rare creatures that hunt only either during the day or by night.

- When night falls, they say you only need follow the light to hunt down the Buck.

- Only by day can you find the Weasel, who gives off a dazzling light only when the sun is out shining brightly.

- You may be able to obtain knowledge by hunting rare animals, and obtain the following titles:

● Removed the following [Level 1] Barter goods, and replaced them with the new goods below:

● Changed so that information in the Barter window will now be reset if the contents of the Barter List are changed due to maintenance or some other factor.

- Whenever there's a change to Barter-related content (ie. number of Sea Coins available for Barter on Hakoven Island are adjusted), the information on the Barter window will be reset.

- However, not all information in the Barter window will be reset, as items that were in the middle of Bartering before such changes were applied will retain their information.

For example, when an item listed at Baremi Island which you could Barter for up to 4 times before an update would fall under the "items to be removed" category,

it would be refreshed if it was never exchanged with the full 4 times of Bartering left intact, but even just one exchange would keep it from being refreshed under the changed listing.

Increasedthe maximum number of Family Inventory slots from 48 to 50.

● Fixed the issue where if a skill's Add-on effect applied both a buff and debuff effect at the same time, the target with Forward Guard would still receive the debuff effect upon being hit.

● Fixed awkward animations of certain characters when using the "Move forward as you sweep" Social Action.

● Fixed how parts of the UI in the Passive tab of the Skills (K) window appeared awkward.

● Stub Arrow, Charged Stub Arrow - Fixed the issue where the Horn Bow appeared abnormal when comboing into other skills.

● Flashing Light - Fixed to combo properly into Ninjutsu: Shadow Stomp when pressing the Spacebar during use.

● Piercing Cry - Fixed to apply the correct amount of damage as mentioned in the description with Spirit Arrow II learned.

● Light's Mark - Added to the list of skills that have the Righteous Fire effect applied.

- The actual skill's effect will occur in the same manner as before.

● Luthraghon's Call I-IV - Changed to apply the correct number of the hits as mentioned in the description when used while mounted.

- Spins the target on hits (PvE only)

- The actual skill's effects will occur in the same manner as before.

● Added the Cheer action to be displayed when obtaining the following items from a box.

● Changed your character to no longer Cheer when acquiring a Mass of Pure Magic.

● Added a weekly quest that you can accept from Bave Ricksa in Oquilla's Eye.

● Added an icon to display if the Krogdalo's Feather effect is active for the Stable, Mount Information, or Horse Market windows.

● Changed all Big Ships to now require characters Lv. 50 or higher to be able to use Cannon Fire.

- Even though characters below Lv. 50 can fire cannons prior to this update, no damage was being applied.

● Added to the requirement for New Adventurers to create a Family Name.

- Once you enter a Safety Zone with a character who is Lv. 15 or higher, the window to create a Family Name will appear.

● Added a warning message to display when registering certain items onto the Central Market with less than 1 hour remaining on your Value Pack.

● Fixed the message displayed when attempting to enter the Pearl Shop (F3) while it's undergoing maintenance to be less awkward.

● Fixed the issue where your character appeared to be underwater when entering Pujiya Canyon from certain points.

● Fixed the issue where you could use Gathering in certain parts of Grána without any visibly gatherable materials.

● Fixed the issue where the alert for hiring sailors wouldn't display after toggling off General Settings - Alerts - Zone Change.

● Fixed the issue where you couldn't proceed with the Nouvermon quest with the Guest from the Mountain of Eternal Winter after having socketed your Nouverikant Outfit with Black Spirit's Claw.

● Fixed the issue where your Mythical Arduanatt would sometimes fall from the sky from using Wings of Swiftness during Wings of Wind/Wings of Freedom while mounted in the air.

● Changed the web Central Market to be unusable when the Guest Pass Coupon expires.