Black Desert offers many settings and options for adjusting the graphical quality of the game to allow Adventurers the ability to customize the game’s beautiful and expansive visuals to better match their PC specifications.

With the introduction of AMD FidelityFX Super Resolution to Black Desert, the GMs decided to prepare this handy guide to help our Adventurers use this feature to better enjoy the Black Desert world with higher graphics and performance.

Step 1. What is Upscale?

Upscale is a feature that simplifies how the game’s graphics are processed, which may in turn somewhat lower its quality, but increases the game’s performance.

Activating the Upscale option will slightly lower the graphical quality, but you’ll be able to view your FPS (Frames Per Second) go up as shown above.

AMD FSR is a new feature added through the September 1st Update that enhances the existing Upscale feature. It also allows has more detailed settings to allow more in-depth customization, so make sure to check out the details below! 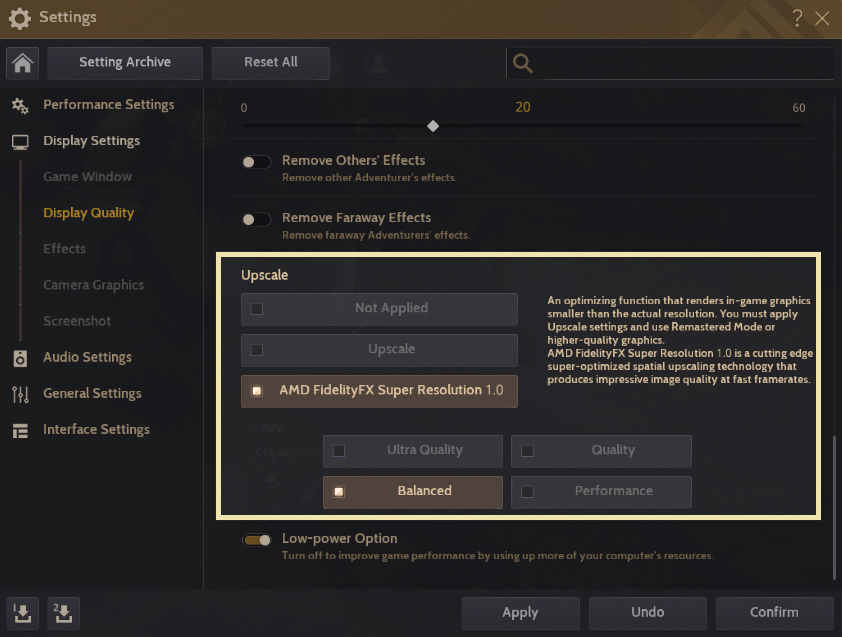 AMD FSR optimizes the game’s graphical quality to improve FPS and performance. There are four different settings for AMD FSR, which allow you to pick a more customized setting to meet your needs. You can see each of their effects below.

You can see how each setting for AMD FSR influences FPS differently below. If the images are too small, try opening them in a new tab to view a larger image.

* These images were captured with a GeForce GTX 1050 TI at a FHD resolution.

Check out the difference in FPS between “Upscale: OFF” and “Upscale: AMD FSR(Performance) ON” in the videos below.

■ Do I need to install a separate program to use AMD FSR?

* Find out more about AMD FSR from the [Official AMD Website].

① If you want to increase your performance while preserving graphic quality and fidelity as much as possible, try out the “Upscale - AMD FSR” setting.