Hello, Adventurers.
This is The MMORPG, Black Desert.
These are the updates made to Black Desert on July 29, 2020.
(Patch size: approx. 430.56MB)
※ Please read below for details.

● The sorceresses of Tarif, who have been studying the Black Spirit for a long time, have uncovered an ancient spell. Known as Naderr's Band, this spell allows adventurers to exchange their enhancement chance with the Black Spirit.

– You can accept the quest series Naderr's Band from the Black Spirit after reaching Lv. 58 once per family. The quest reward, Naderr's Parchment, can be used to add a slot to the band.

– Naderr's Band and any enhancement chance stored on it can be accessed by all characters in your family.

● Added a monster zone to Hexe Sanctuary with a recommended AP of 160.

– Traitors Graveyard was hidden in the depths of Hexe Sanctuary but was eventually discovered. Attack the Traitors Gravestones located throughout the area to attract Grudge-bearing Skeletons.

– The Grudge-bearing Skeletons will try to protect the Traitors Gravestones, and by destroying them you will also vanquish the soldiers.

– Regular Skeletons will respawn at certain intervals while a new Green Orc Skeleton Warrior will respawn every time one is defeated.

This new monster zone is set in a place with a completely different vibe from Polly's Forest with its hauntingly cute mushrooms. 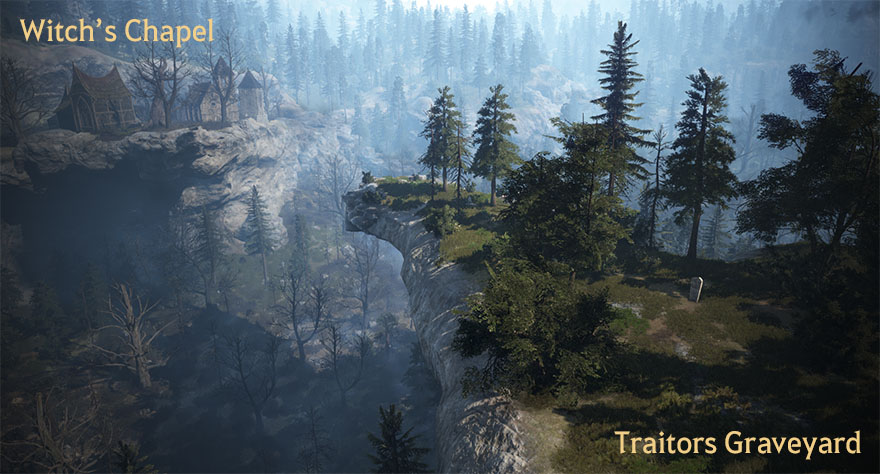 ● Added a separate sub-window for main quests to the quest window that appears when you interact with a quest-giving NPC or the Black Spirit.

– This sub-window will contain quests that you can normally check under the Main tab of the Quests (O) window as well as some quests that will help with your character's growth and adventures.

– However, if there is no main quest to do via that NPC or the Black Spirit, if you press Q you will be directed to check out other types of quests.

– The Black Spirit quest window for non-main quests will now have the following tabs: All, Suggestions, Recurring, Event.

With this change, you will not only be able to differentiate main quests from the other quests when interacting with the Black Spirit but also when interacting with other NPCs. We hope that this will help make questing more streamlined and enjoyable, especially at the beginning of your adventures. For the future, we are planning to make the quest widgets easier to read and more customizable to your play style. 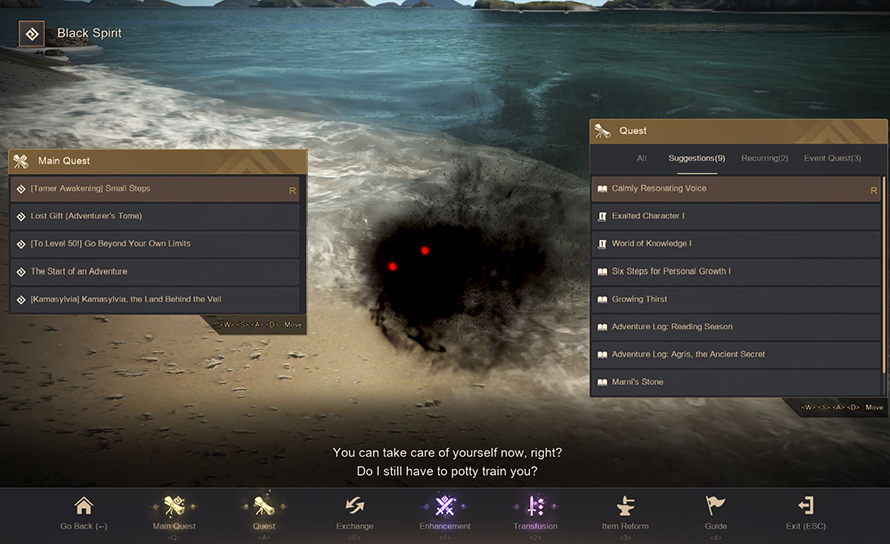 ● Added the new item Crow's Sacred Chest, which you can get at Crow's Nest.

● You can now use the Return of an Archaeologist function even if you change characters or reconnect to the server within 30 minutes of using Archaeologist's Map.

● You can now loot [Season] Ouk Pill of Rift after defeating a Savage Rift boss in the season servers.

● Changed the quest type of [Season] Stronger Tuvala Gear from recurring to combat.

● Dream of Doom I–III, Absolute: Dream of Doom: You no longer hold E during the skills to cast Crow Flare, but press E again.

● Fixed the issue where Heilang moved strangely after you used one of the Roaring skills during its cooldown while the Heilang: Berserk buff was in effect.

● Ultimate: Blitz Stab: Fixed the issue where the skill's icon appeared as if it was an icon for a Black Spirit's Rage skill.

● Absolute: Red Moon: Fixed the issue where if the skill was learned after unlocking Succession, the damage from Maehwa: Ascension to Heaven did not apply.

● Endless Explosion: Fixed the issue where the skill activated again instead of Fallout when you pressed RMB after casting the skill then Endless Fight.

● Fixed the warning system in the Kratuga Ancient Ruins to activate correctly and the issue where the first wave of monsters appeared in the minimap but did not spawn.

- If adventurers immediately leave the area where they've set off the Kratgua Ancient Ruins warning system, the alarms will cease instantly.

- Elqueesh and Belloten, who appear for Kratuga Ancient Ruins warning level 2, will disappear if left alone for 10 minutes.

● Fixed the issue where boats in the swamps of Altinova appeared to float in mid-air.

● Fixed the issue where Ashen Plague Infected Patients were appearing at Star's End and not the Contaminated Farm during the quest [Star's End] Faded Ashen Plague.

● Fixed the issue where colliding with the Giant Soldiers near Feinia of the Forest of Seclusion looked awkward.

● Fixed the issue where the ghosts that should accompany the Mysterious Ghost in Heidel wouldn't appear in certain situations.

● Combined the Awakening and Succession quests into one questline per class.

– Complete questlines under this tab by first accepting the Awakening quests. Once completed, you may proceed immediately with the Succession quests. 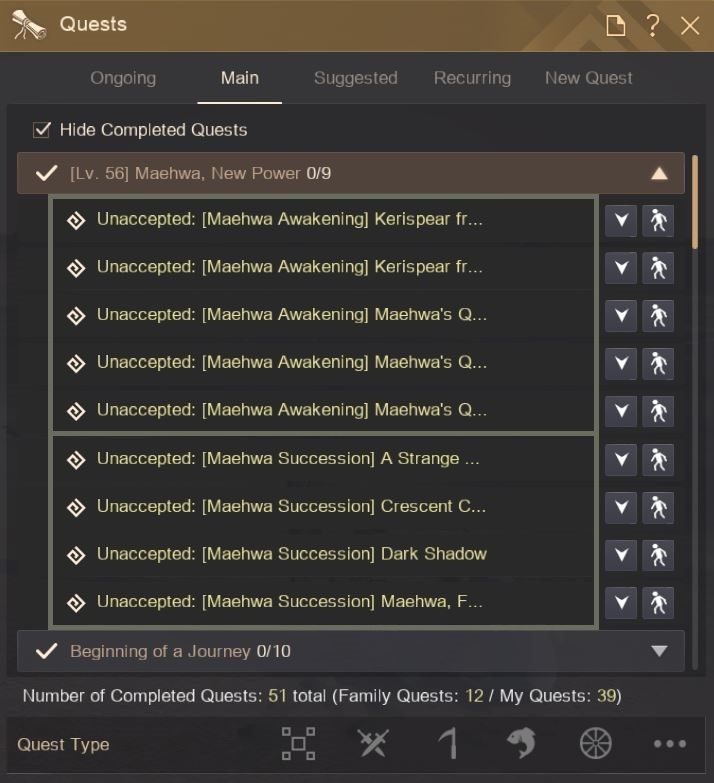 ● Removed the button to re-obtain Basteer gear from the Black Spirit since Basteer gear has been replaced by Naru gear as quest rewards.

● Removed the quest Adequate Preparations from appearing to adventurers who've either already accepted or completed the quest Another Way Through. This was to improve the flow of the Calpheon main quest series after the addition of the quest [Horse Emblem] Seal of the Secret Guards.

● Removed mentions of Dim Magical gear from the quest summaries of Looking for Adventurers and A Disaster Foretold.

● Added the text "[Shai Talent]" to the titles of relevant quests.

● Fixed the issue where Strikers could not obtain the quest [Enhancement] Even Stronger Tuvala Gauntlet I.

● Changed how UI for selecting between different crossroads quests appears.

● Added details on how your sailor's traits impact your ship in the Ship Info window and the Manage Sailors windows.

● You can now throw away items directly from your mount's inventory.

● Added a notification that will appear when attempting to throw away a non-trashable item from your mount's inventory.

● You can now double-click in the End Game window to switch between characters or transport them.

● Added character names to the alert text that appears when changing characters with the End Game window.

● Slightly increased the size of the scroll bar of the Black Spirit's Safe window.

● Slightly increased the area where you can click and drag the Black Spirit's Safe window.

● Fixed the issue where the special effects for the Enhancement and Transfusion buttons wouldn't appear in the Black Spirit window.

● Fixed the default camera location to be more natural for Arena of Arsha invitees who enter Spectator Mode.

● Improved the lighting of certain routes within Cokro Chamber.

● Fixed text overlap issues with certain UI for the Arena of Arsha.

● Fixed the issue where sometimes a quest button would appear even when an NPC had no quest to give.

● Fixed the issue where you could use an Old Moon Trade Pass when selling Pearl items in the Central Market.

– Please note that Pearl items are not affected by the Marketplace Silver Collection buff.

● Fixed the issue where item descriptions didn't disappear after moving items stored in the ship to the inventory from the Ship Information window.

● Fixed the issue where certain characters appeared strangely in the Skill (K) window if they were queuing for the Arena of Arsha.

● Fixed the time limit for completing the guild mission [Gathering] Guild Supply Mission (during which you have to catch Smokey Chromis x10) for large and extra-large guilds so they are different.

● Fixed the issue where the wrong Shop NPC information was appearing for certain items in the Crafting Notes.

● Fixed the issue where item tooltips would remain on the screen even after removing the gear item from mounts or ships.

View list
Comments 5
Necrosmash
Lv. 61
So we are stucked with this new skill window ? sigh~
Hostyle
Lv. 60
The new Skill UI is atrocious. You people should really consider reverting. The older UI was simpler and a lot easier to understand. The only benefit we got out of the new UI for Skills, was that we do not need to make a real money purchase just to change
our skill distribution - which in itself was outrageous.
Windarcher
Lv. 62
what about pen capotia i have completed my 40 quests and still didnt get pen capotia and isold my tet crescent before the day

GVLasH
Lv. 61
Yeah like seriously old Skill UI was so easy to understand and finding at one skill