(Patch size: approx. 1.49 GB)
- Please note that the update for Steam may be larger than the size listed above.

Event 5. A Letter from the GMs

● Pre-creation for the new class, Drakania, is now open.
- You can now pre-create and customize the new class, Drakania.
- You can select either the Mountain of Eternal Winter region or the Ancient Stone Chamber to start your adventure in when you pre-create Drakania.
- The UI from which you can select the region you want to start your adventure in will be displayed when you press the Create Character button on the Character Creation window.
- You'll start your adventure in the Ancient Stone Chamber after maintenance on Apr 6, 2022 when you pre-create a character that is not Drakania.
- With the addition of the new class, you can now increase up to 27 character slots with the Character Slot Expansion Coupon.
※ The total number of character slots will remain at 28 until further notice. 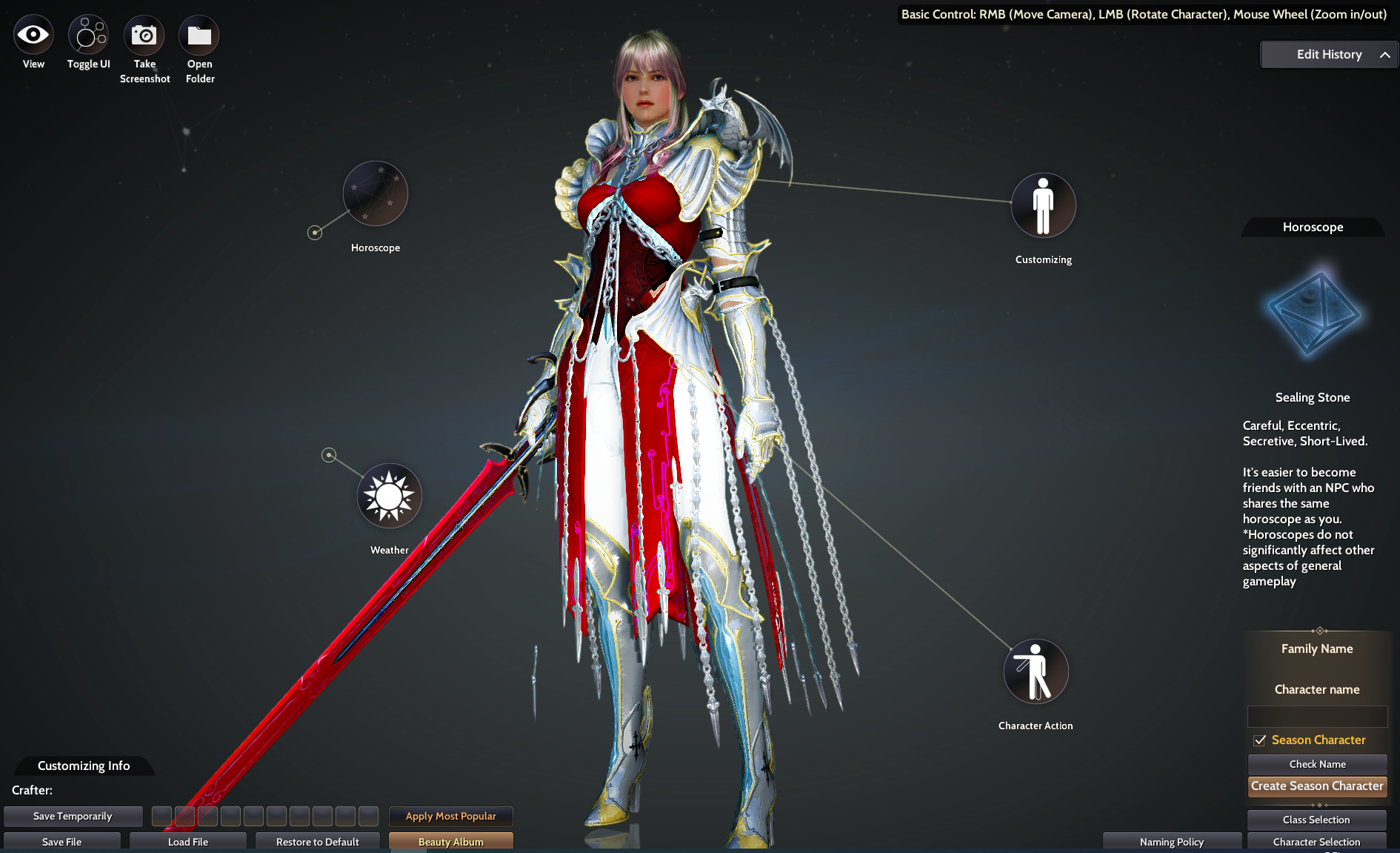 Treasure-type items are clearly one of the must-have rarities Adventurers dream about obtaining in Black Desert. There wasn't a way for Adventurers to express the pleasure and satisfaction of obtaining a treasure-type item after working so hard to get it, other than linking the item in chat.
We should have shown more respect for our Adventurers' efforts in overcoming challenges by providing something that naturally earns you "respect" from others without having to show it off yourself.
We've decided to do a little something to satisfy that. First, we added special titles to be clearly noticeable at a glance by others and also added furniture representing treasures so that you can constantly be reminded of your accomplishment. We crafted the pieces of furniture to illustrate that "respect" down to the smallest detail, and we hope this will provide some satisfaction for Adventurers who own the treasures.
※ The quests won't take your treasure-type items, so there's no need to worry.
● Added quests where Adventurers who've obtained the treasure-type items can obtain special furniture and titles as quest rewards.
- You can accept "The Treasure's True Owner" quest pertaining to each of the treasures you have in your possession by showing them to Patrigio at Crow's Nest.
- Upon completing a "The Treasure's True Owner" quest, you can obtain furniture shaped like the treasure and a title pertaining to the treasure.
※ You can meet Patrigio at Crow's Nest during Quests (O) -> Suggested -> [The Great Expedition] Crow's Nest consecutive quests.

Due to the revamp of the Crypt of Resting Thoughts and Gyfin Rhasia Temple Underground regions, the importance of Accuracy stats in PvP as well as PvE has come to the forefront. Accordingly, attack decision effects were added so that you can check the Accuracy of your character's attacks. With this change, you'll be able to set a clear goal for your gear or experience for yourself the Accuracy of your attacks when fighting against monsters that are much stronger than your character's level.
● Added "Miss" to be displayed when your attacks miss so that you can more clearly recognize instance in which you miss attacks or successfully evade.
- You can activate the settings for this feature by going to the Show/Hide tab of (New) Menu -> Setting (F10) -> Settings and set "Miss Effect."

▲ An image taken of when having low Accuracy.

● Prime: Black Wave - Adjusted the attack range.
● Prime: Black Wave - Fixed the issue where damage wouldn't be applied in certain situations when leaning your back against a wall.
● Core: Swirling Darkness - Changed so that you cannot reset during Swirling Darkness' cooldown.
● Shadow Eruption - Changed the attack range to match the visual effect.

● Flow: Grand Bloom - Fixed the issue where the damage of Full Bloom wouldn't be applied properly when resetting the skill after learning.

● Hop - Improved to combo more smoothly into Try This! after using laterally and backward.

● Savage Hack I - Fixed the issue where the cooldown wouldn't be displayed.

● Serpent's Coil - Changed to continue the skill when holding RMB and stop continuing the skill and perform the last attack when releasing RMB. 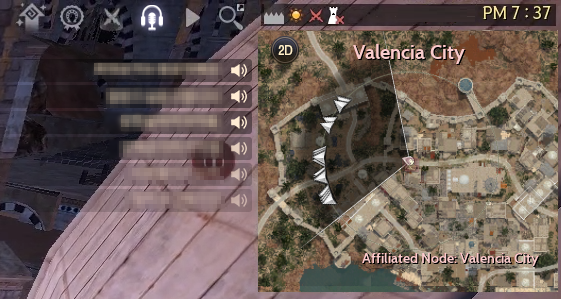 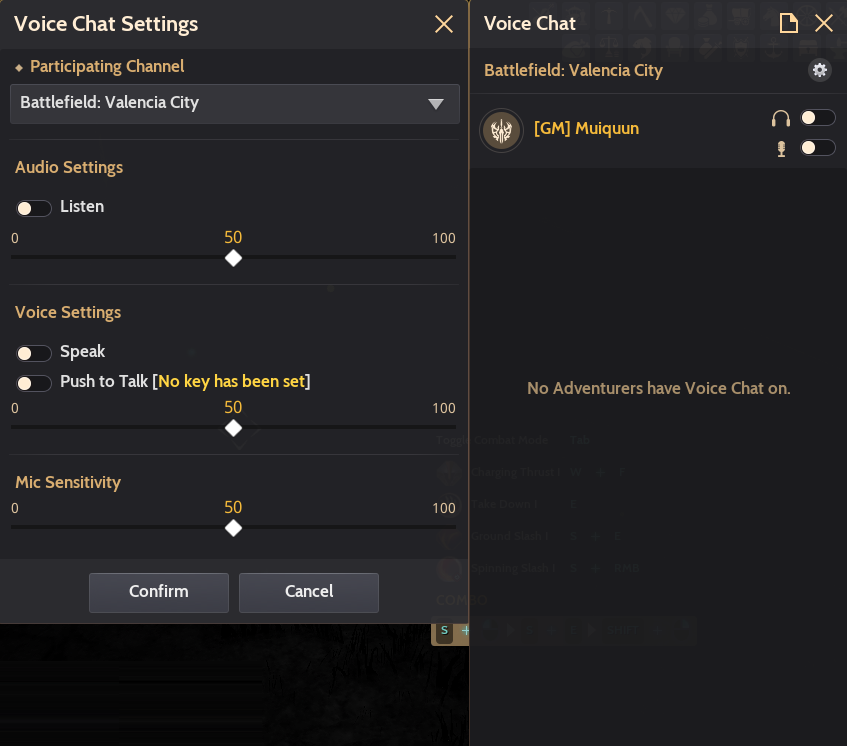 ● Added the Voice Chat channel, "[Red Battlefield] Valencia City" so that you can voice chat with your team members in Red Battlefield - Valencia City.
- You can freely voice chat with your team members when you enter Red Battlefield - Valencia City without adjusting any settings.
● The 2021 Winter Season has come to a close.
- All season characters that have not been converted will be automatically converted to normal characters.
- Adventurers who have not completed either "[Season Server Graduation] At the Crossroad" or "[Season Server Graduation] Into the Big Wide World" will get Fughar's Letter of Encouragement and Gift Box Full of Memories in their mailbox (B).
* The letter will be deleted at 23: 59 on Apr 29, 2022, so please read it before it gets deleted.
- All season quests that have not been completed have been deleted.
- Tuvala gear of the highest level per slot that hasn't been converted after maintenance on March 30, 2022 (Wed) will automatically be converted.
- Tuvala enhancement materials, Tuvala conversion stones, unconverted Tuvala gear, and other seasonal items will be deleted.
※ Please refer to the [Notice] End of Winter Season for more details regarding Tuvala gear conversion and which items were deleted.
● With the end of the 2021 Winter Season, the season servers have been changed into the Rulupee servers.

● Added a notification which displays the items and Silver you can obtain when selling a Lv. 14 or lower mount or making a Lv. 15 or higher Imperial Horse Delivery.
● Improved the alpaca to now be dismountable by pressing S+R.
- Press R while holding S (S+R) to dismount without needing to use the NPC Interact function.

● Fixed the issue where you could carry out installations of certain structures in restricted areas with the Remote Fort Construction function during Node Wars.

● Red Battlefield: Valencia City - Fixed so that you can no longer climb up to restricted parts of the battlefield where you couldn't be attacked by other Adventurers and could still occupy an area.

● Improved the arrangement of the slots for your awakening weapon and cosmetic items, such as underwear and eye accessories, in your Equipment (I) window.
● Improved so you can now scroll through the Storage UI even from the empty spaces.
● Added banners providing information on pre-creating a season character on the Server Selection UI and the bottom right of the in-game screen.
● Stabilized the security verification system.
● Fixed the issue where the ON/OFF settings for displaying defense icons wouldn't save properly.

● Changed the time for World Bosses, Conquest Wars, and Tribute Wagons starting from Apr 2 (Sat) to May 1 (Sun), due to the start of Ramadan. 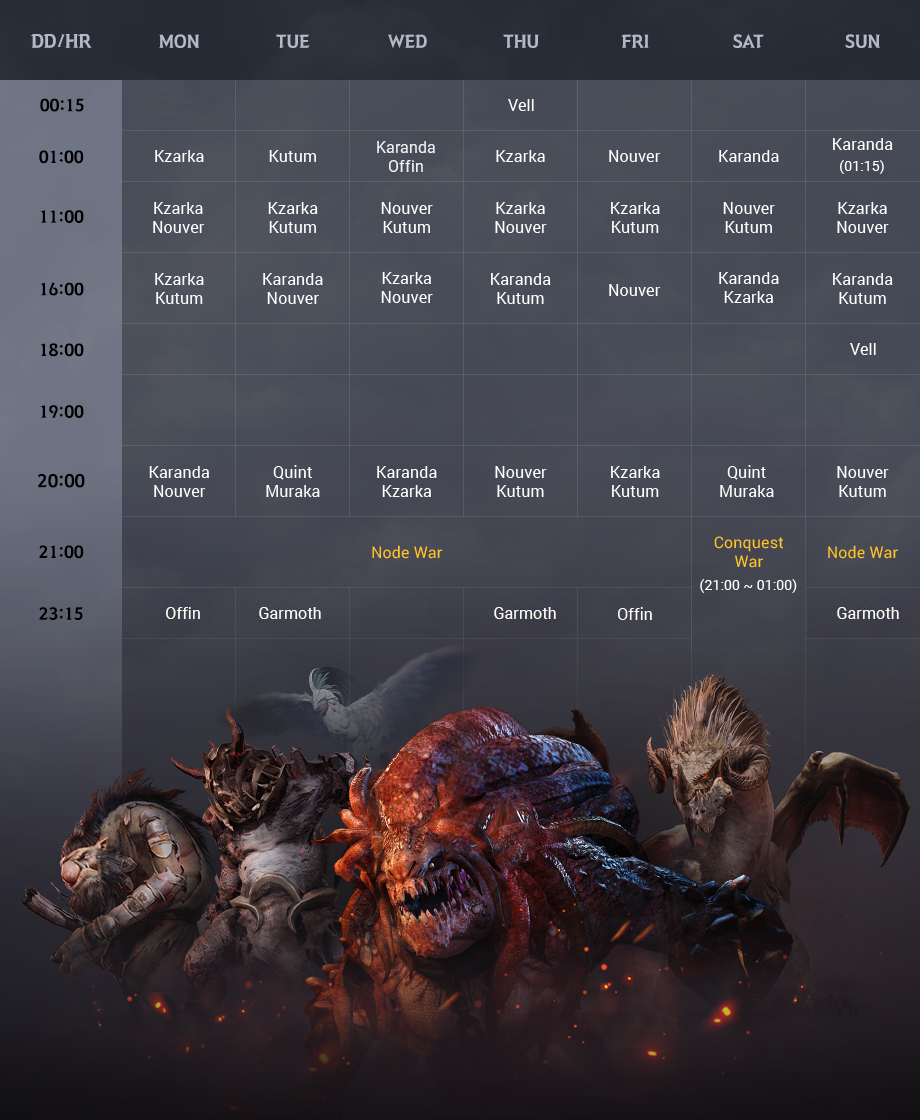 ● Optimized servers in relation to the transfer of wagons.
● Optimized the chat window's UI functionality.