(Patch size: approx. 1.79 GB)
- Please note that the update for Steam may be larger than the size listed above.

The Adventurer's faithful companions can now be trained to Tier 5 and also be appointed as Alpha Pets.

You can now train Tier 4 pets up to Tier 5 pets, who will also gain the ability to be appointed as Alpha Pets.

Alpha Pets will keep other pets in your pack in line to make sure they will all work together to aid you in your adventures.
The Alpha Pet's Talent will increase by 1 additional level, and their "Pack Leader" skill will increase the looting speed of all of your other pets nearby.

You can only appoint one Tier 5 pet as the alpha, and any other Tier 5 pets checked out will display the same stats as other Tier 4 pets.

We originally designed the Tier 5 pets to boast a greater variety of skills or effects, akin to an upgraded Tier 4 pet, so to speak.
However, we felt that the process to "upgrade" to a Tier 5 pet would prove too taxing on our Adventurers, so we decided to change the focus to increasing the pet looting speeds.

We bid you happy adventuring with your cute pets and their alpha pack leader.

● Added Tier 5 Pet Training and Alpha Pets.
- You can now train Tier 4 pets into Tier 5 pets.
- Tier 5 pets gain the ability to be appointed as Alpha Pets by the Adventurer.
- An Alpha Pet's Talent will increase by 1 additional level, and their "Pack Leader" skill will increase the looting speed of all active pets nearby.

● You can now train Lv. 10 Tier 4 pets to Tier 5 through Obi Bellen at the Old Wisdom Tree in Kamasylvia.
- Summon the Black Spirit (/) to accept the "[Pet] Domesticated Squabbles" quest. Complete it to unlock the "Tier 5 Pet Training" button through Obi Bellen.
※ You can start this quest from Lv. 50 via the Black Spirit (/) and can check your progress through Quests (O) - Suggested tab.
※ Make sure you've ticked [Life] quests under Quest Type if you cannot see the quests. 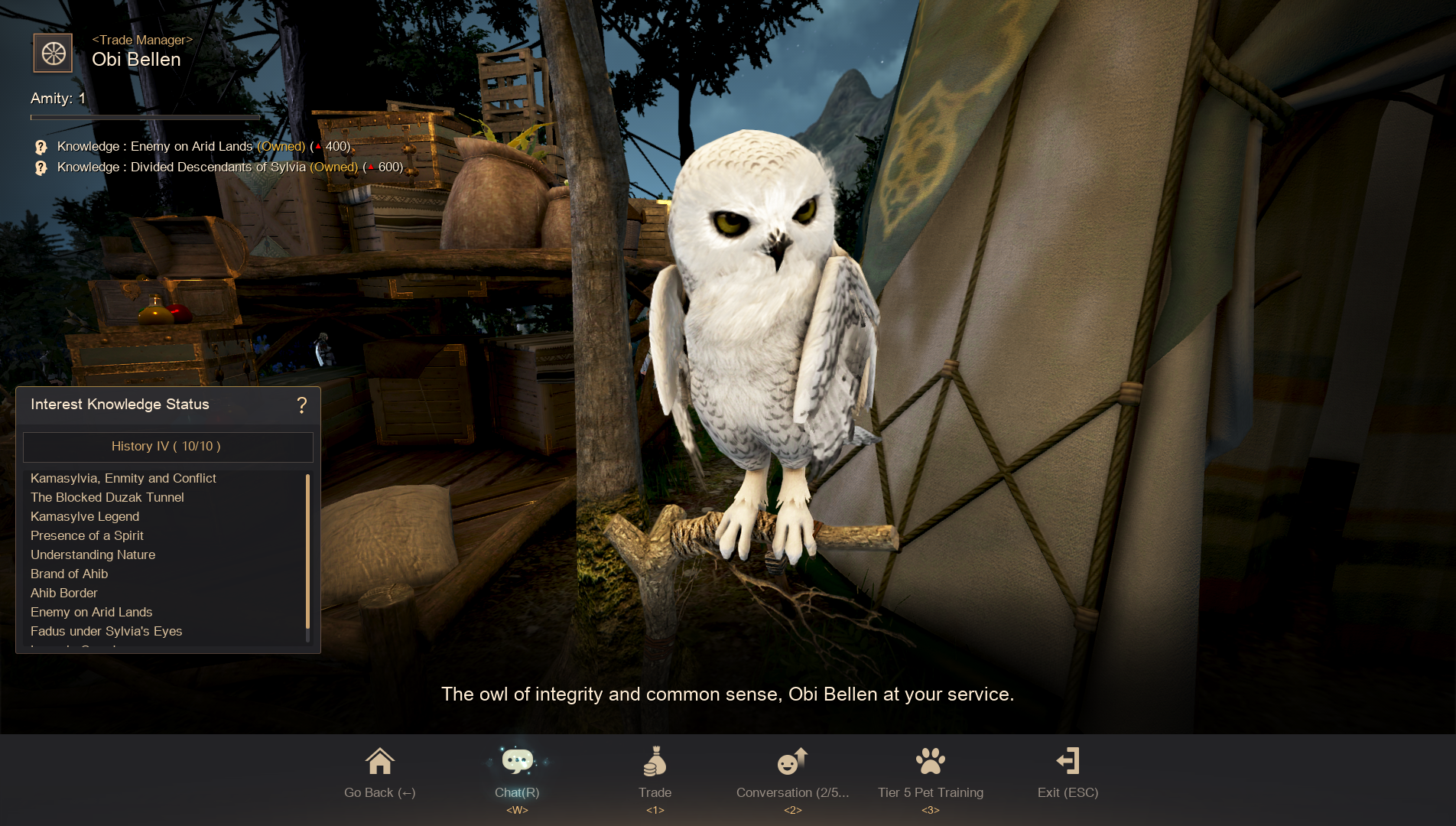 ● Training a Tier 5 pet requires one "Royal Plume." You can craft one via Simple Alchemy (L).
※ You can purchase "Growth Reagents" from Old Moon shops for 60 million Silver each. 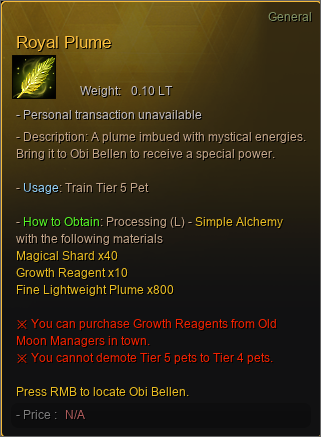 ● Once you acquire a Royal Plume and have your Lv. 10 Tier 4 pet checked in, you will be able to train a Tier 5 pet through Obi Bellen.
- Tier 5 pet training will always succeed.
- Tier 5 pets do not gain a special appearance or skill. (You can still use Pet Appearance Change Coupons.) 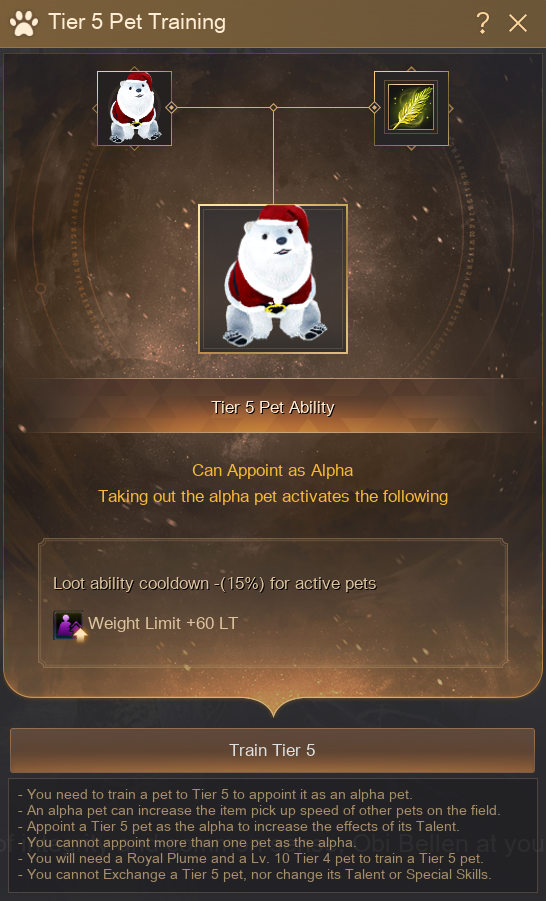 - Alpha Pets grant the following effects when checked out.
* Pack Leader: Loot cooldown -15% for active pets
* Talent Lv. +1: The Alpha Pet's Talent gains one additional level.
* e.g.) Combat EXP +4% → +5% / HP +100 → +125
※ Special skills (Fishing cooldown reduced, gathering amount increase, etc.) are not affected.
- Tier 5 pets who have not been appointed as alpha will retain the same stats as a Tier 4 pet.
※ Tier 5 pets cannot be exchanged with any other pets after training is complete.
※ Make sure to change a pet's appearance or skills via Exchange before attempting the Tier 5 Pet Training.

The Dwarven artisans of Gavinya Great Crater have developed a new and improved way to repair and extract items.

The newly improved functions have been spreading across the continent, far and wide, from stable keepers to even the campsites.

Now Adventurers will only need to press the "repair" button once to repair any and every item that is in need of repair, and the means of extracting outfits have also been improved.

Before using the "Select All" button and extracting from outfits, please make sure you've locked any outfit/costume appearances you do not wish to accidently extract and destroy.

● Improved the repair function.
- You can now repair all items (equipped, in your inventory, horse gear, ship gear, guild gear) with one button press.
- You can pick and choose which criteria to repair via the cogwheel-shaped settings button on the side. 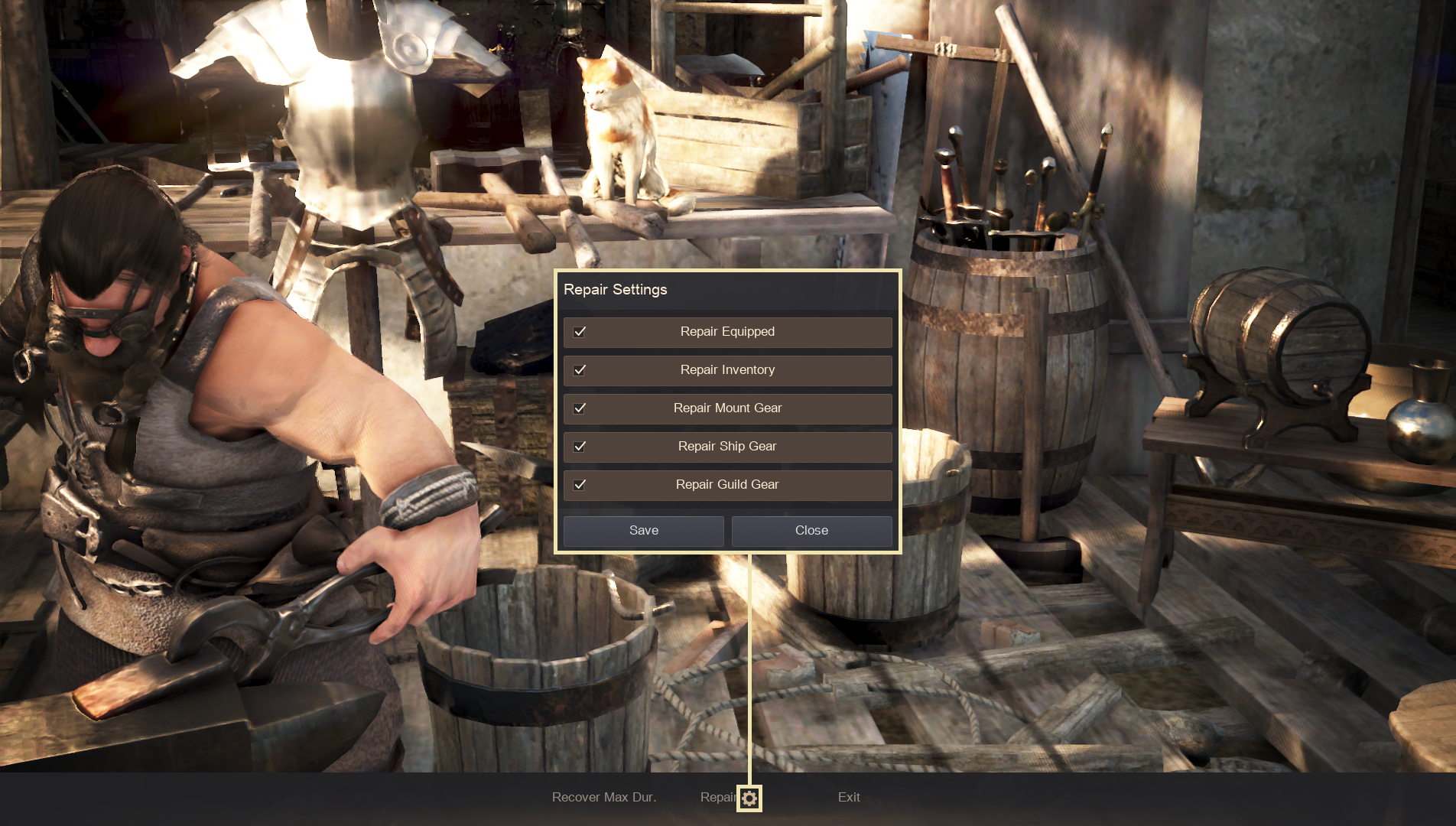 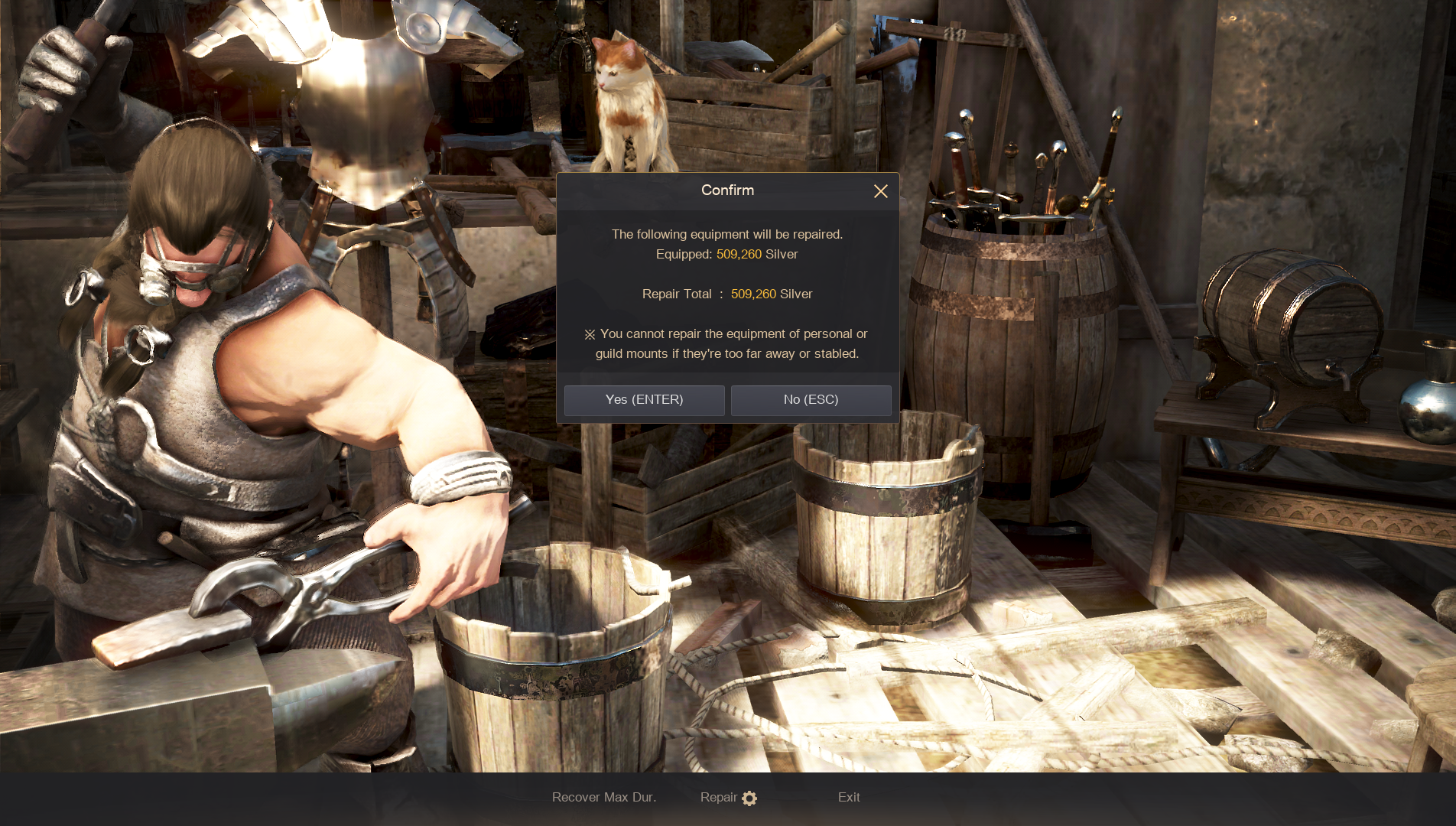 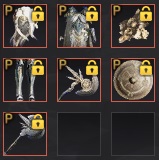 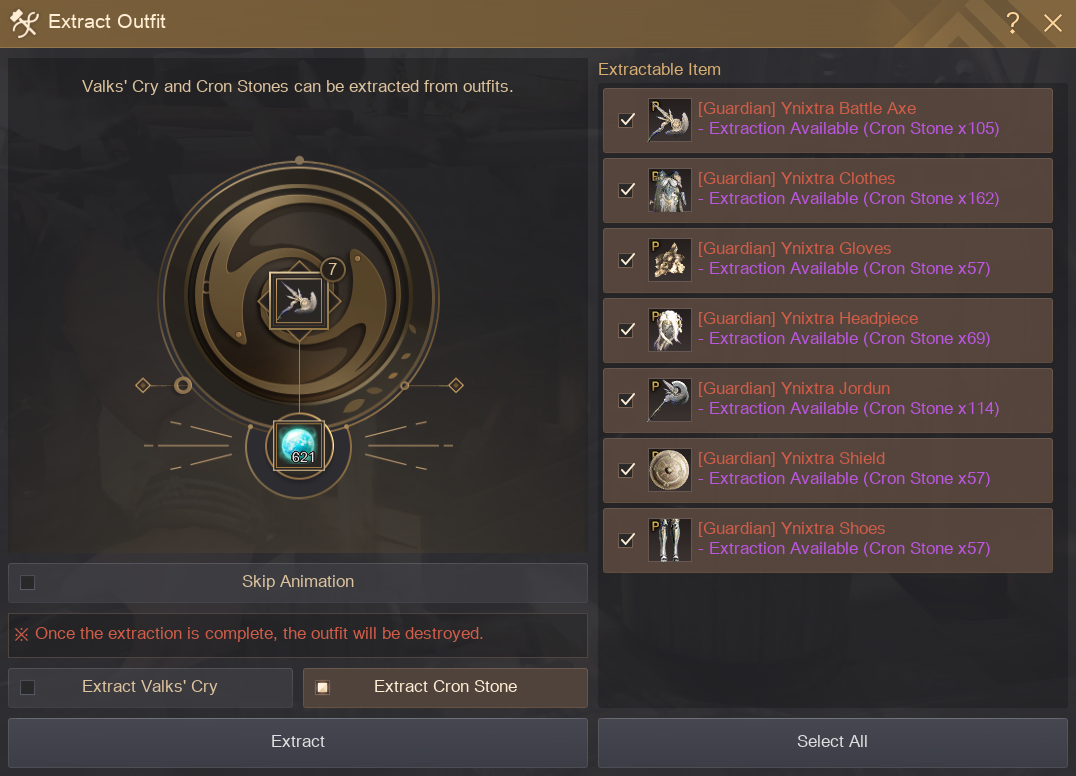 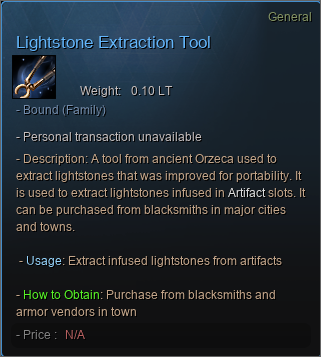 The Florchestra Contrabass, named after the instructor of the famous maestro, Artina the "Wandering Musician," is now available. In addition, Marni's Instruments, invented by the infamous "mad" scientist, have also been discovered. 4 different types of Marnians and the Marnibass are available, ready to produce mystical sounds never heard before in the world of Black Desert.

Many of our musically-inclined Adventurers have composed wonderful music with their Beginner/Florchestra instruments thus far. We hope the new additions of the Florchestra Contrabass and Marni's Instruments will inspire both [I'm a Producer UwU] and novice Adventurers alike to create compositions that aren't just exciting but also express sounds in greater detail and volume.

The mysterious Marnians are aptly named (Wavy Planet, Illusion Tree, Secret Note, and Sandwich), each capable of producing 4 unique sounds for a total of 16 different styles. With such a variety of possible sounds, each time you compose a new music score it can feel as though you’re composing a brand new song.

● There are have been recent rumblings of Shais within the world inside the Vitclari dreaming of new dreams. They say this may be a chance to experience a sound never heard before.
● You can craft Marni's Instruments via Manufacture (L) with the relevant "Tremor Converticator" obtained through a quest.
● You will first need to complete a prerequisite questline available once per Family via the "Music Score: Genius of Keplan" purchased from Artina.
● Marni's Instruments can be obtained as follows:
- Purchase the "Music Score: Genius of Keplan" from Artina, then complete the prerequisite questline (Lake Kaia).
- Complete the questline to unlock Marni's shop (Tori Woods, Mountain of Eternal Winter).
- Purchase blueprints for the instruments from Marni's shop.
- Accept the daily quest from Marni to obtain the required crafting materials for each instrument.
- You must complete the relevant daily quest or purchase the appropriate Tremor Converticators to craft Marni's Instruments.
※ You must toggle on [Life] quest types to be able to accept these daily quests.
※ Only Shai can access this questline and relevant shops for Marni's Instruments.
※ You can proceed with all 5 Marni's Instrument quests if you possess all 5 different blueprints in your inventory. 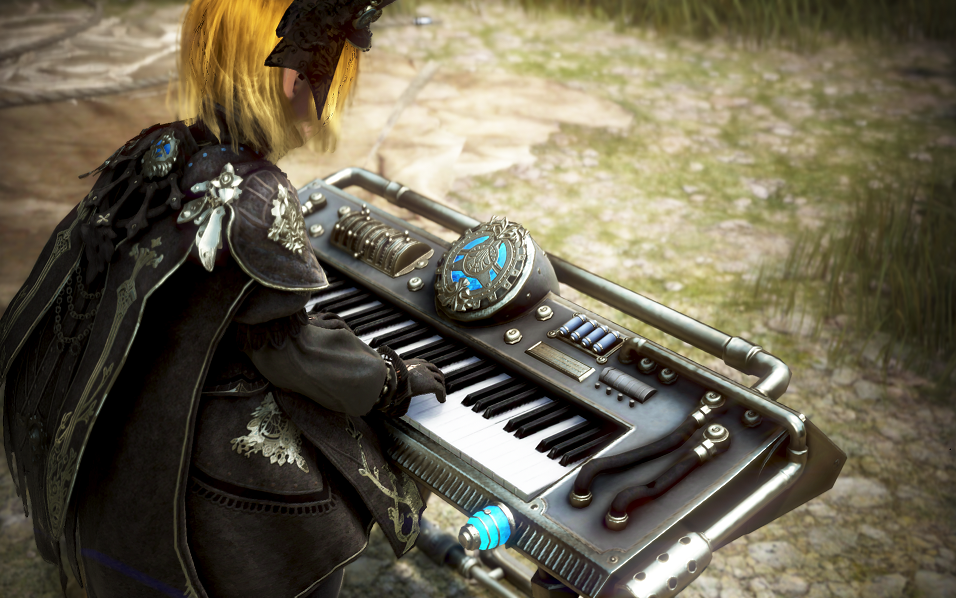 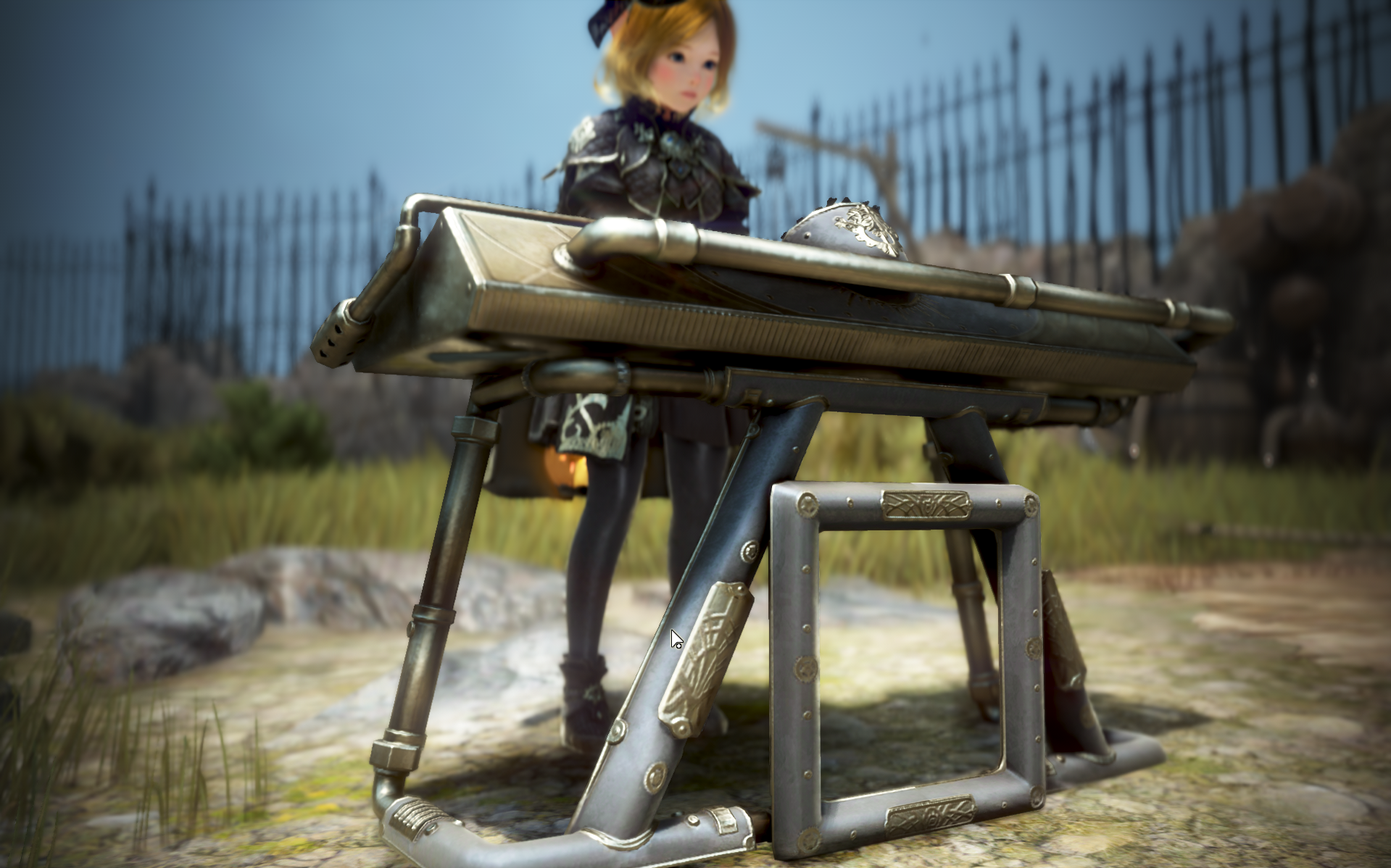 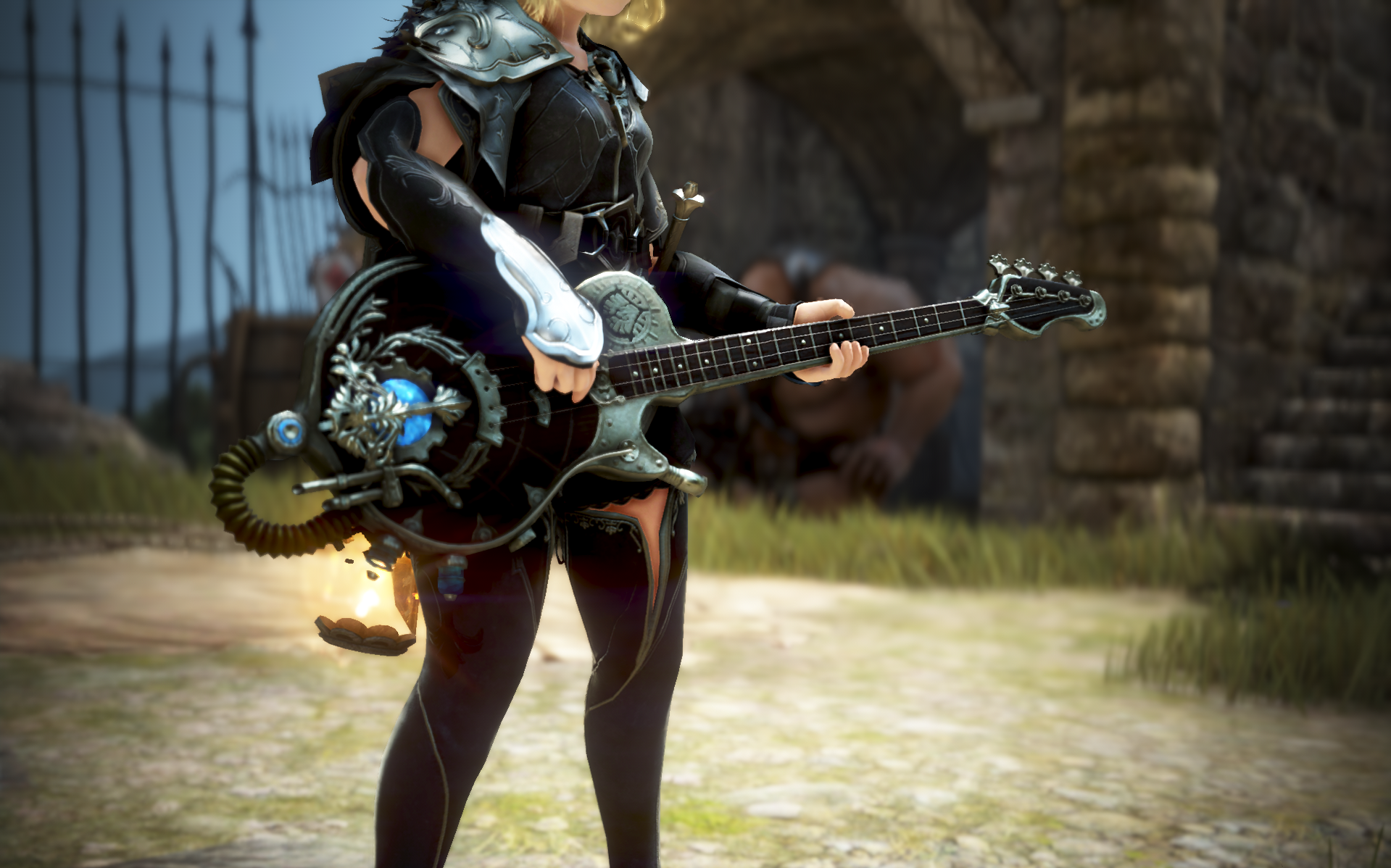 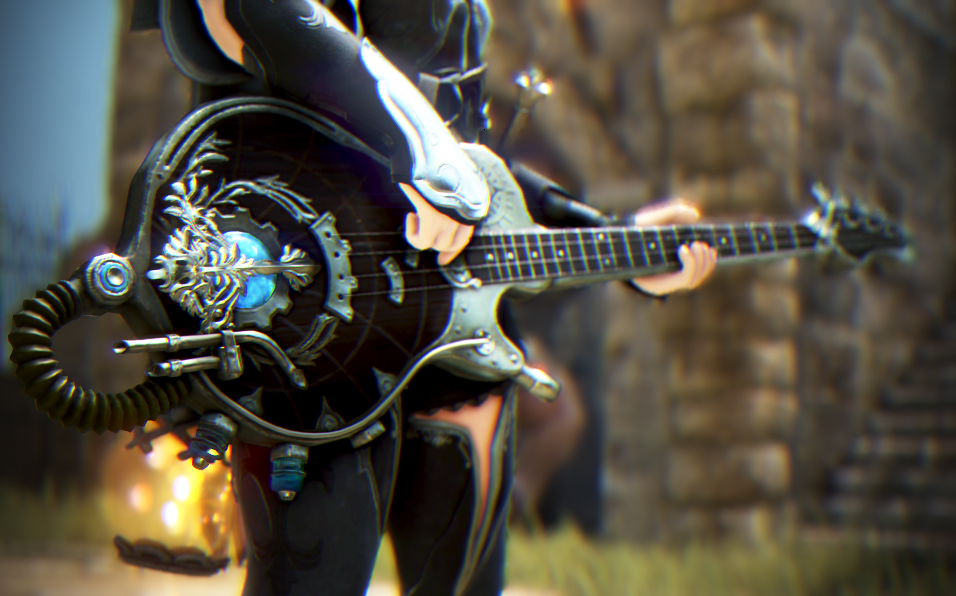 ● Added the Marni Shop that can be accessed after purchasing the "Music Score: Genius of Keplan" from Artina and completing the required quests.
※ Complete the daily quests to obtain Tremor Converticators to save Silver when purchasing the following items.

● Improved the Music Album UI's placement and spacing to better include a greater variety of instruments. 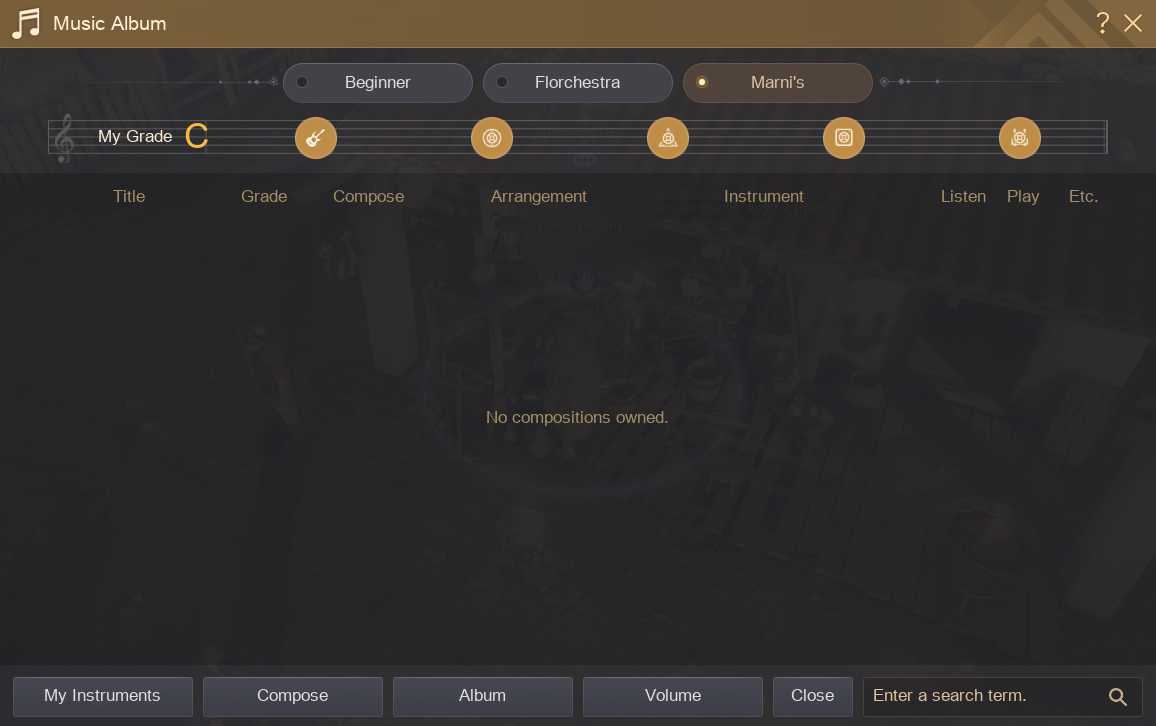 ● [Music Album] Fixed the issue where you couldn't use adjust the Velocity and Technique of several notes for Select Mode.

● Fixed the issue where a summoned minion could crash the game client by attacking the guild drill.

● Fixed the issue where you couldn't move or your instrument remained on your character when you used certain social actions immediately after canceling performing music.

● Applied the following changes to Arena of Solare:
- The matching times for certain ranking brackets of Arena of Solare have been improved.
- All Adventurers will now have their Family names displayed in the battlefield.
- Removed the pull effect that occurred when the Unknown Sphere, that appears in round 4 and 5 at Ruins of Tzol, started fusing in the middle.
- Changed so that guild skill passives and buffs cannot be applied in the Arena of Solare.
- Changed the Recent Results UI in Arena of Solare to display your last 20 matches.
- Improved the light effect of the elements to be displayed when using Optimization Mode and when Effect Opacity is set at 30%.
- Changed to start the arena music immediately after the round begins.

● Added the new item "Heart of Kutum," which contains the might of Thundercloud Kutum. 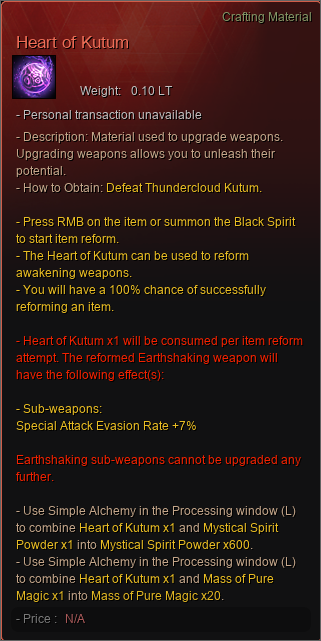 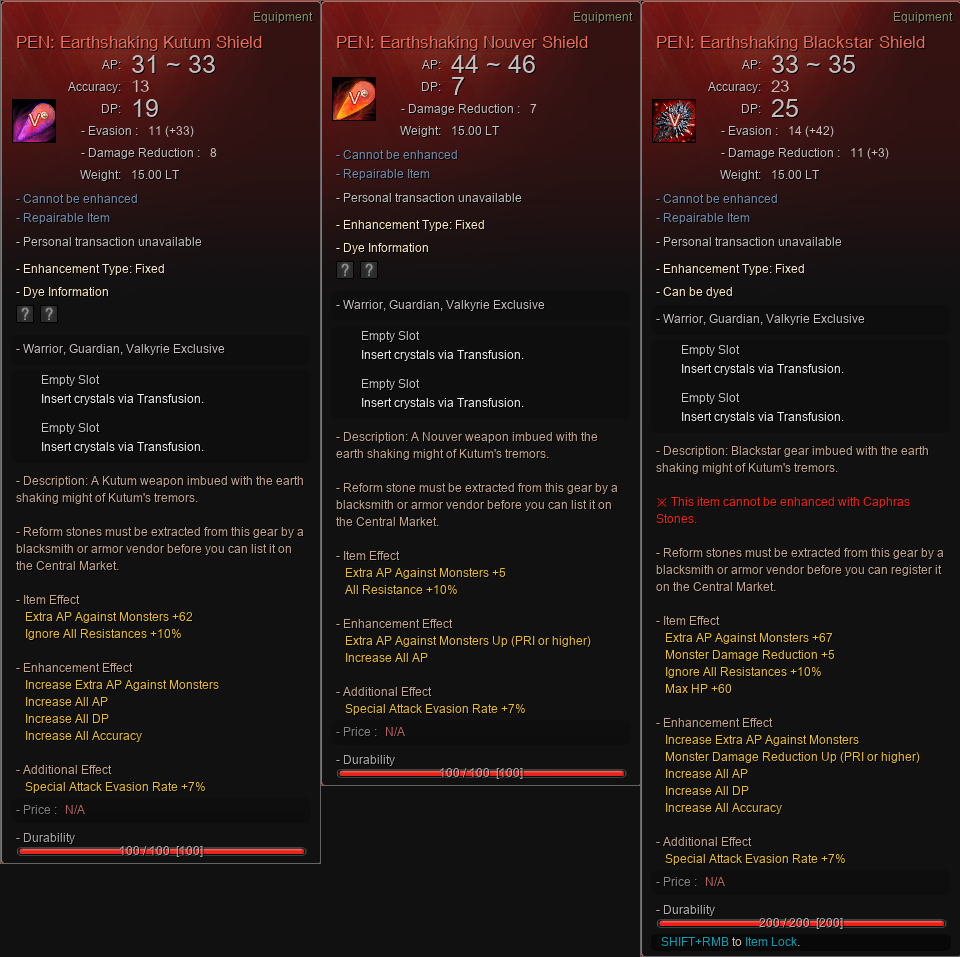 ● Increased the duration of the item "Kutum's Power Stone" and added the effect "Item Drop Rate +5%." 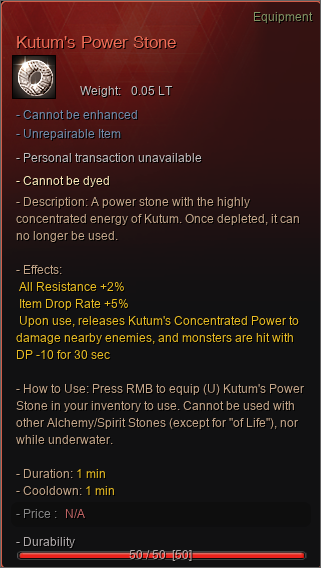 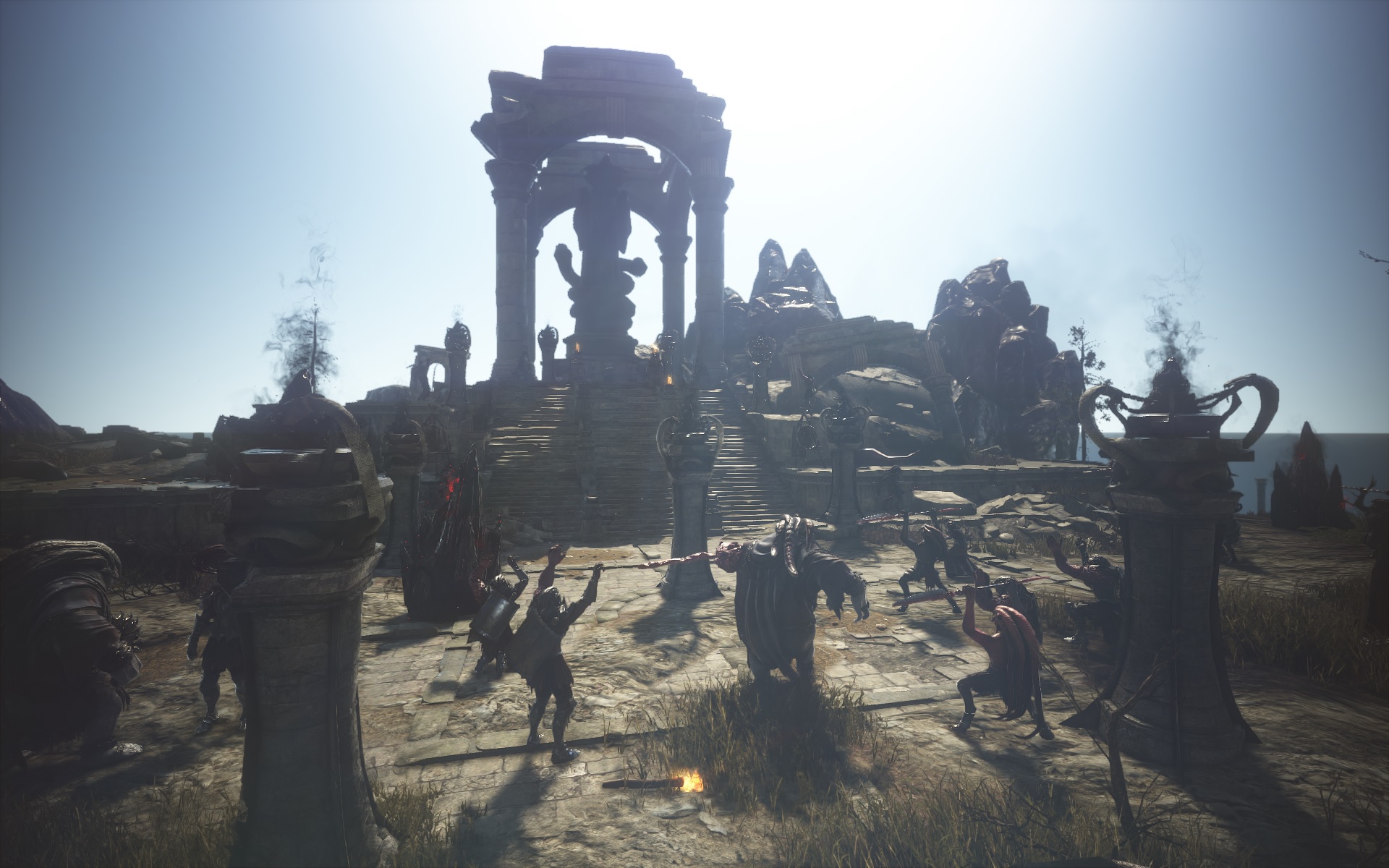 ※ Applies to the loot that is obtained after the update. Does not apply to Syca's Rare Boxes already in your possession. 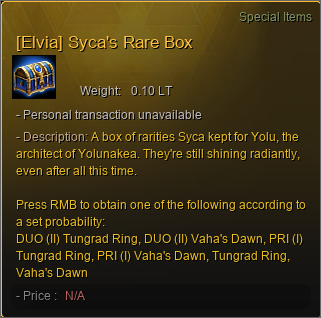 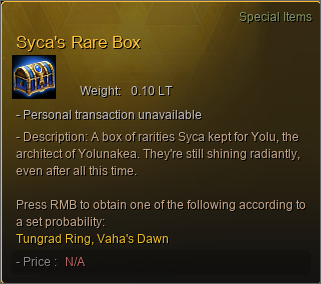 ● Changed the following loot price that can be obtained by gathering with a Hoe after defeating mushroom in Polly's Forest:
- Loot Price: 1,955 → 9,720 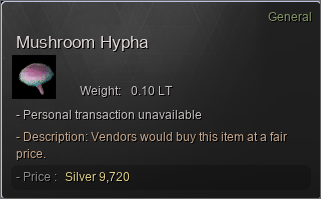 ● There are stories that come from all over the world of Black Desert:
- Crio from Velia says that there is a fish well known for its taste.
- It seems like a cute kitten from Velia is waiting for someone.
- It is rumored that there is a kid that speaks with an unusual accent in the Calpheon Slum.
- A Valencian archaeologist is waiting for news from her sister, who has decided to explore the desert in search of the Aakman Temple.
- The O'draxxia Work Manager and Storage Keeper have started to spread new rumors.

● Improved lines and sitting posture of the soldier on guard duty in Trina Fort.
● Improved Calpheon Bain Farmland, Falres Dirt Farm residents conversation.
● Fixed the issue of the character during cut scene combat to other adventurers.

● Added a function to see the "upgrade tree" where you can check your ship level when upgrading ships.
- You can click and check the ship upgrade tree from the Ship Upgrade menu.
- Check types and characteristics of each ship that can be upgraded through this UI.
* Upgrading is not available through this UI. You can only preview the upgrades. 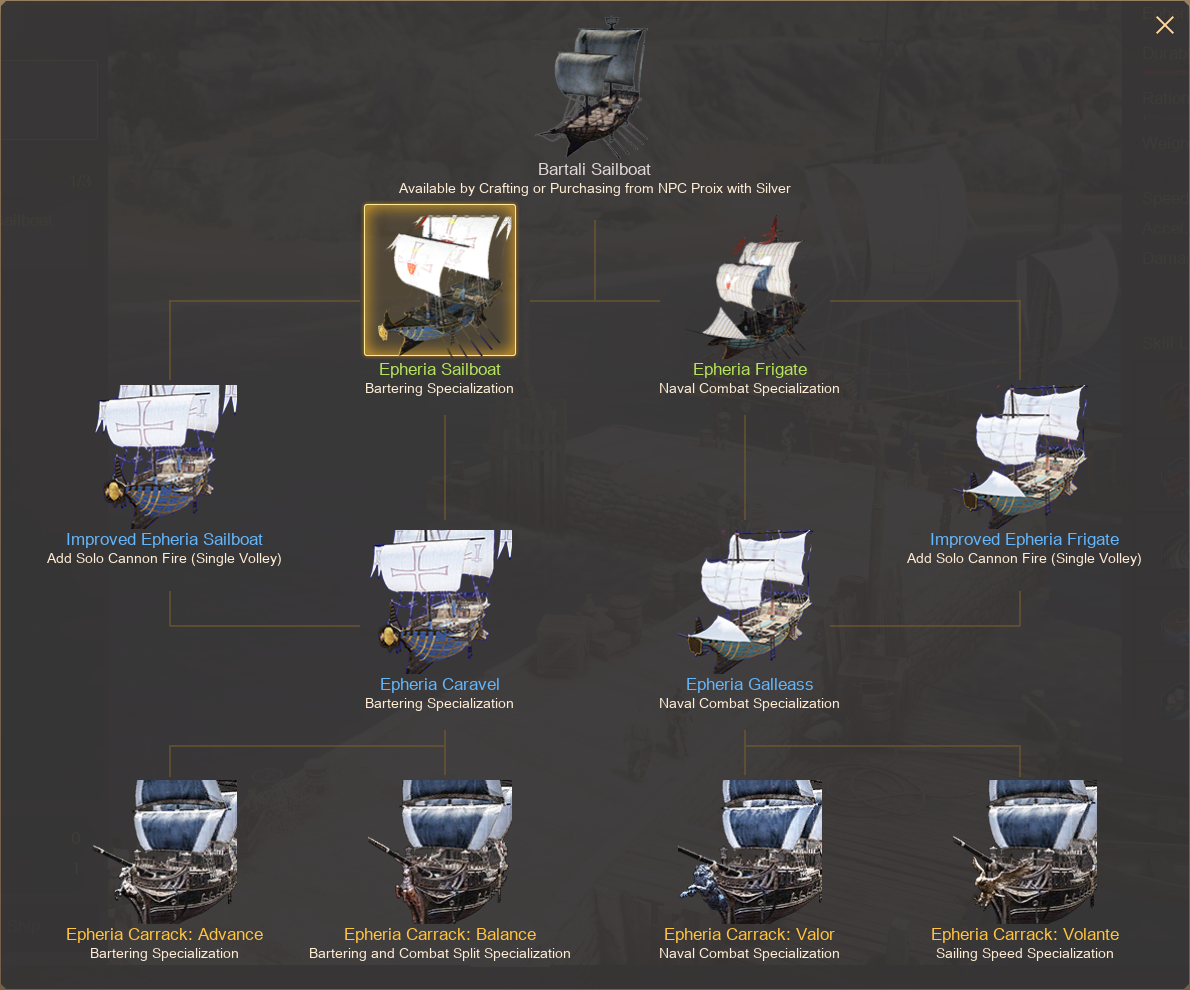 ● Fixed the issue of Alpaca's mount icon and description displaying as a donkey in Character Selection screen.
● Improved so the notification widget of the quest progress, conversation and completion displays.
- Notification Widget will show even after meeting the requirements by talking to an NPC.
● Added image for Arena of Solare and Arena of Solare Rank, Arena of Solare Emblem UI.
● Moved the “unequippable” icon to the bottom left corner so that it would not overlap with the item count on gear icons.
● Fixed the issue of another icon displaying instead of the Find NPC icon located in the lower right menu visible on the World Map (M).
● Fixed the issue where the icon indicating loot cannot be picked up in a party with a level difference of 10 would persist even after the lower-level party member leveled up.
● Fixed the issue on the Exchange Pet window where seeing the probability without selecting the tier information caused the client to display another language.

● Improved so that the quest completion sound doesn't play every time an monster required for the objective is defeated.
● Fixed the issue where pets that cannot be taken out simultaneously assigned to different groups prevented the group Take Out from functioning properly.

We hope you enjoy your time in Black Desert,
Thank you.
View list
Comments 1
Niashagra
Lv. 60
Can you please add the feature for Pearl shop to show if the costume is purchased already?
I have many characters and alot of outfits and I once made a mistake and bought the same outfit twice.
Thanks.