(Patch size: approx. 893.38 MB)
- Please note that the update for Steam may be larger than the size listed above.

Event 2. The Treasure Hunt is On

Screenshot Mode (Ctrl + U, Photo Gallery) has been revamped.


First we added a guide (toggled by F1) on the side which lists the different hotkeys and relevant settings.

These hotkeys will make it easier to adjust visual effects such as filters, blur intensity, gamma, and contrast, etc.

We also added the ability to adjust the ambiance, as well as the time and weather, in your photo so that you can take the best pic suited to your location.
From the quiet hours of dawn to the pitch dark hours of night, with weather ranging from clear skies to cloudy days, you can choose the best settings to take that quality picture. (Sadly, rain or snow cannot be changed on whim).

Last but not least, we also added the function to perform Social Actions in Screenshot Mode.
Along with the addition of Slow Mode (Hotkey: U), which slows down your character, these functions will help bring out the best side of your character for your photo sessions.

We look forward to seeing the marvelous photos that our expert photographer Adventurers will take. Thank you. 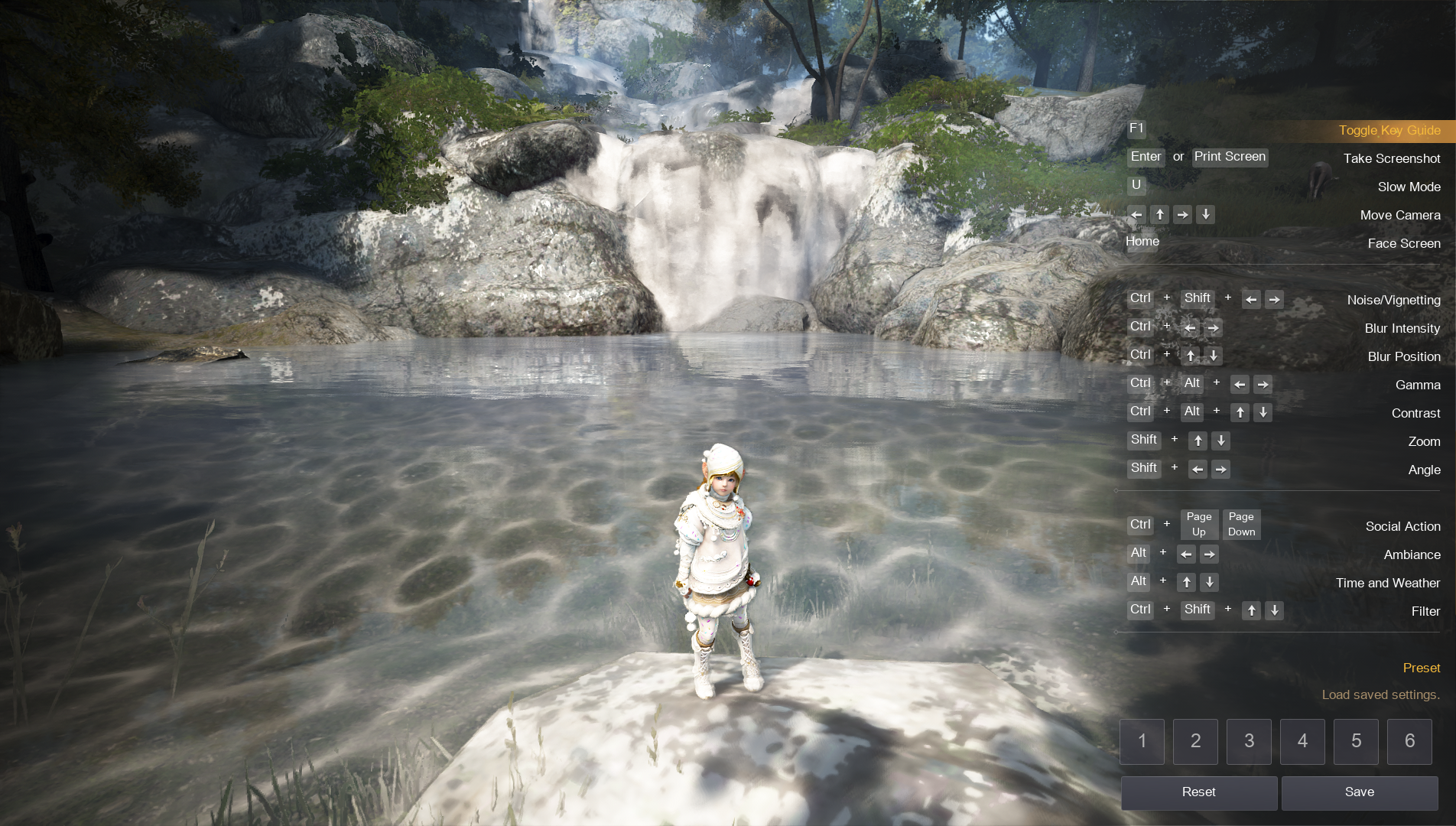 - A guide has been added to the right side of Screenshot Mode that labels all the different hotkeys and settings.
* Press F1 to hide the guide.
- You can now also use your mouse to select and adjust Screenshot Mode settings.
- Added the ability to adjust weather, time, and Social Actions in Screenshot Mode.

- Added Screenshot Mode presets.
* You can now save any changes made to noise/vignetting, blur intensity/position, gamma/contrast, zoom, angle, ambiance, time and weather to specific presets in Screenshot Mode.

▲ Load/Save Presets
- The camera will no longer follow your mouse movements in Screenshot Mode.

As we mentioned during in the GM notes, we are applying an update regarding the maximum amount of items you can list and purchase from the Central Market.
We've increased the amount you can list and purchase by item type, and, as long as there are a certain number of items listed on the market, you will be able to purchase a greater amount of items simultaneously than you were previously able to purchase.
We hope this will bring some quality of life improvements for our Adventurers who frequent the Central Market.

● Earthly Pain
- Fixed the issue where the sound effect of attack 1 would not be played.

The Adventure Logs were originally designed to provide a different means of experiencing the variety of content Black Desert had to offer, while also rewarding the Adventurer with items or stats.

To help new Adventurers progress through the available Adventure Logs with ease, we've altered some of the objectives for these entries, including Igor Bartali's Adventure Journal that started it all.

● Improved the Adventure Logs as follows: 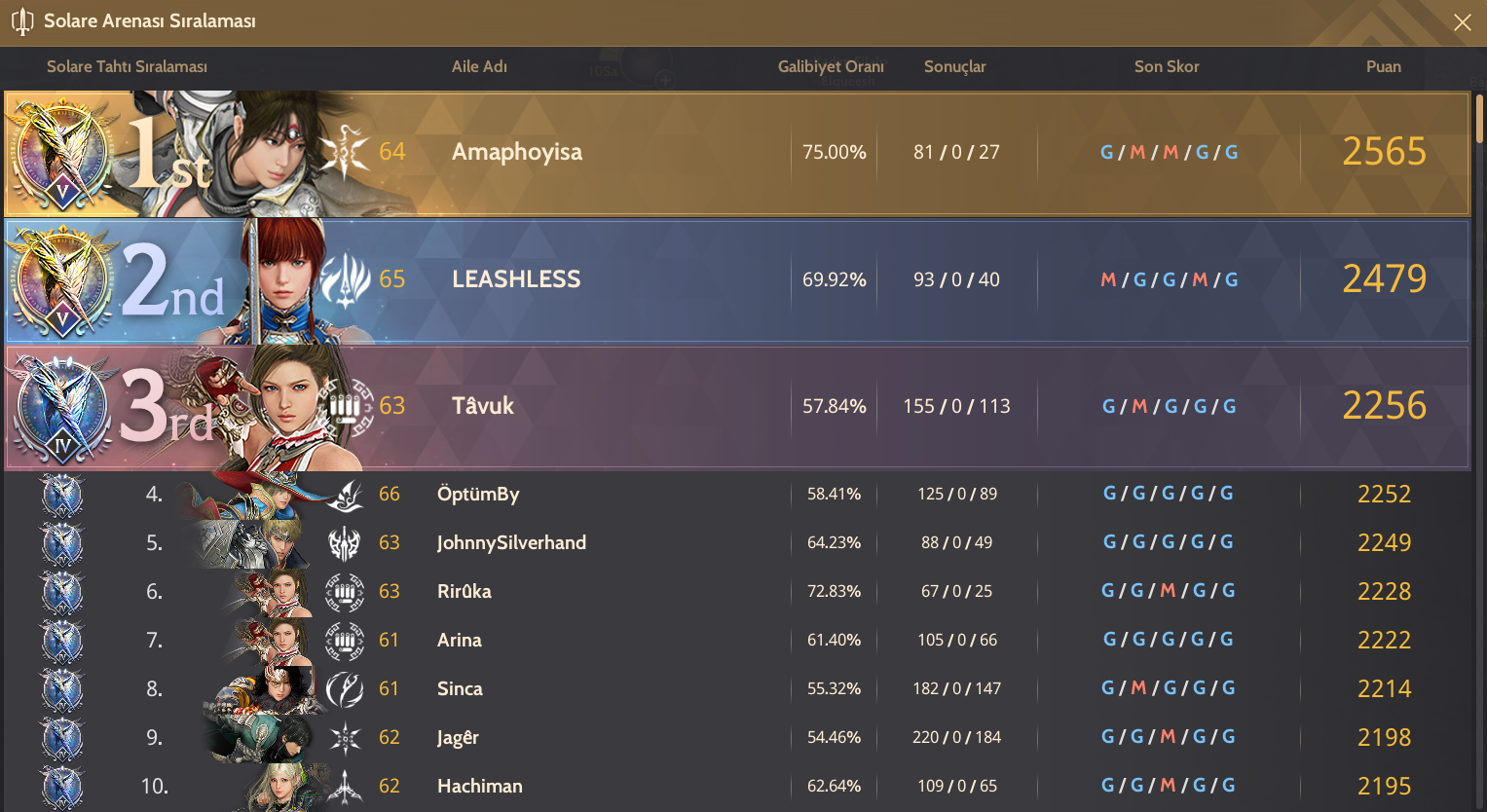 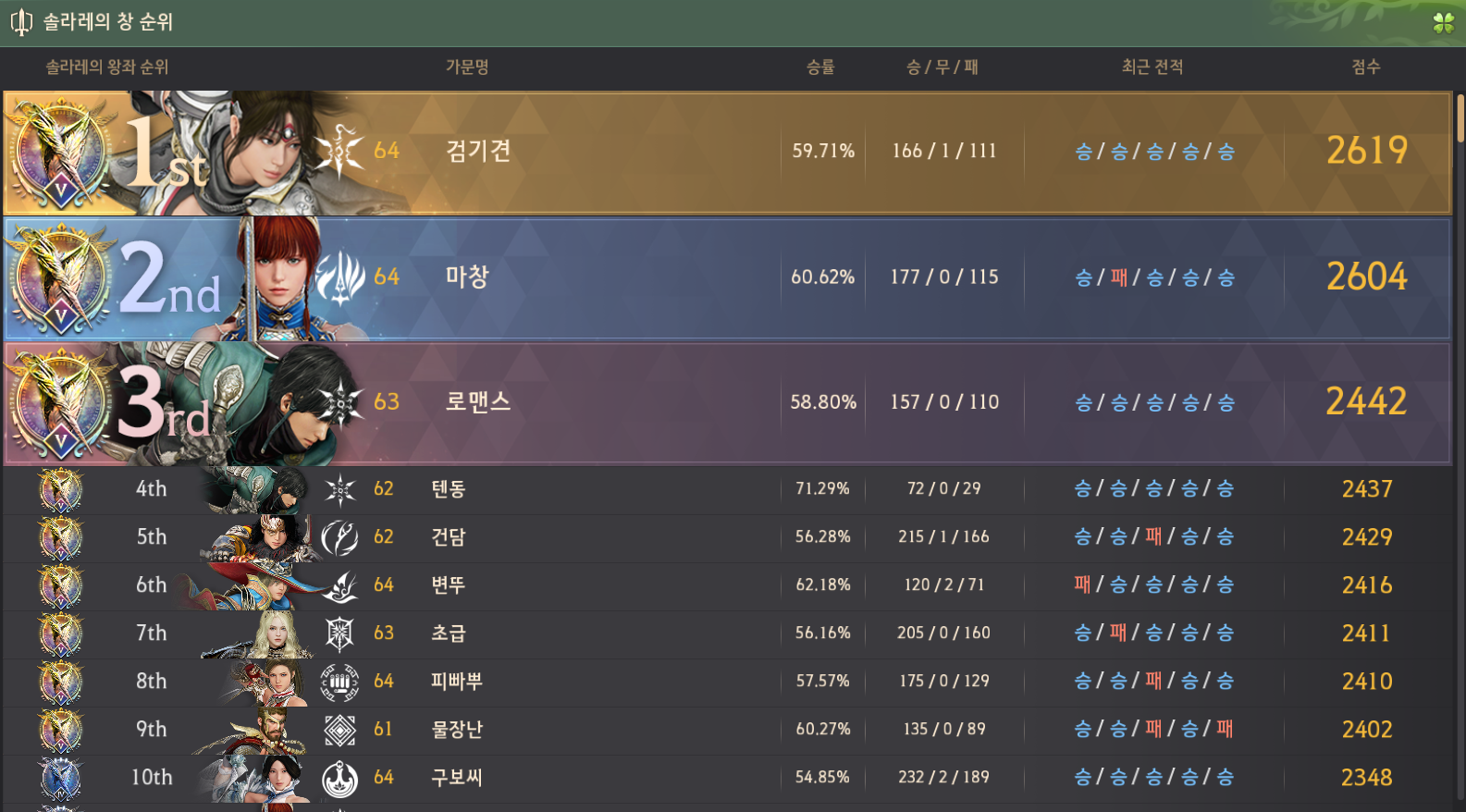 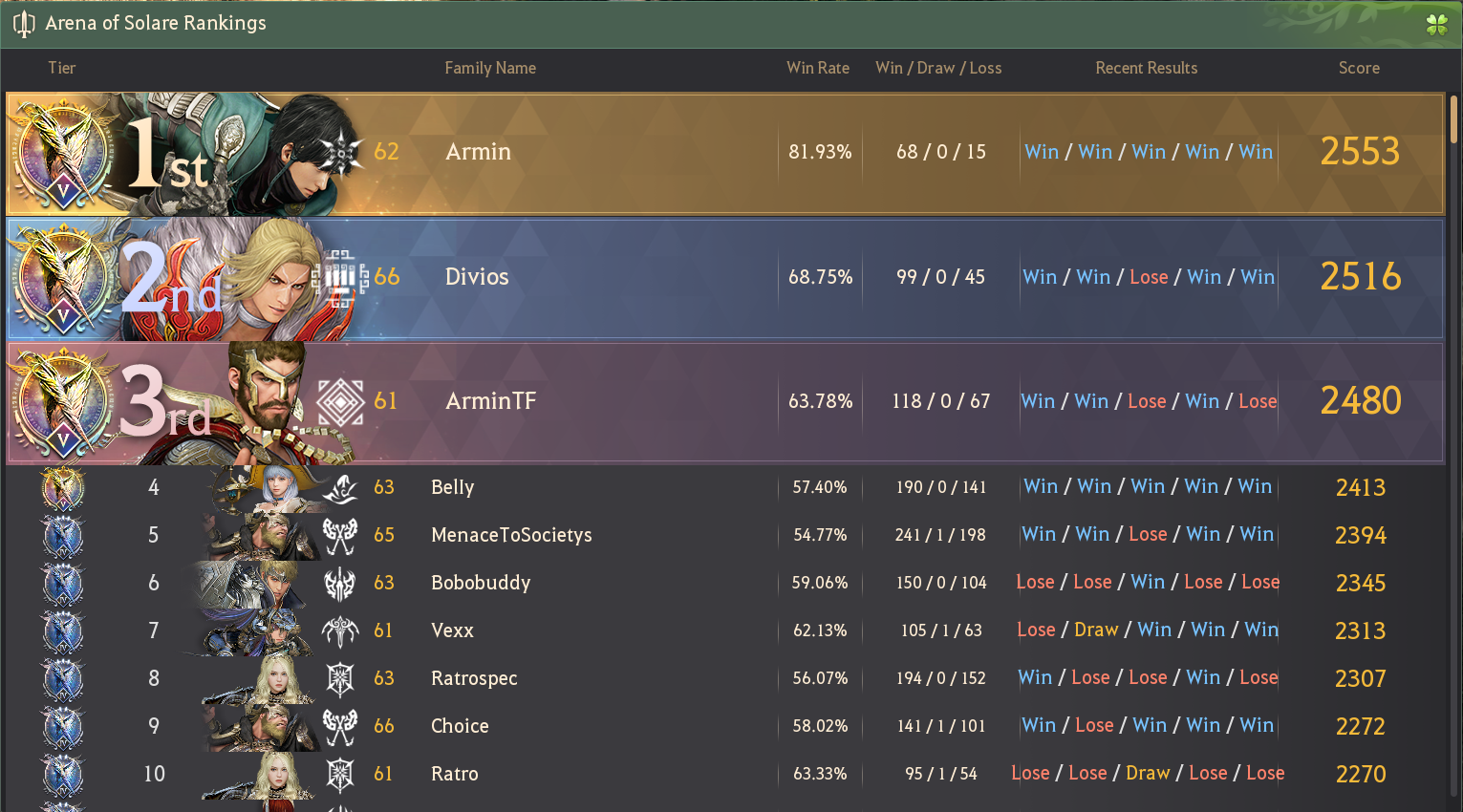 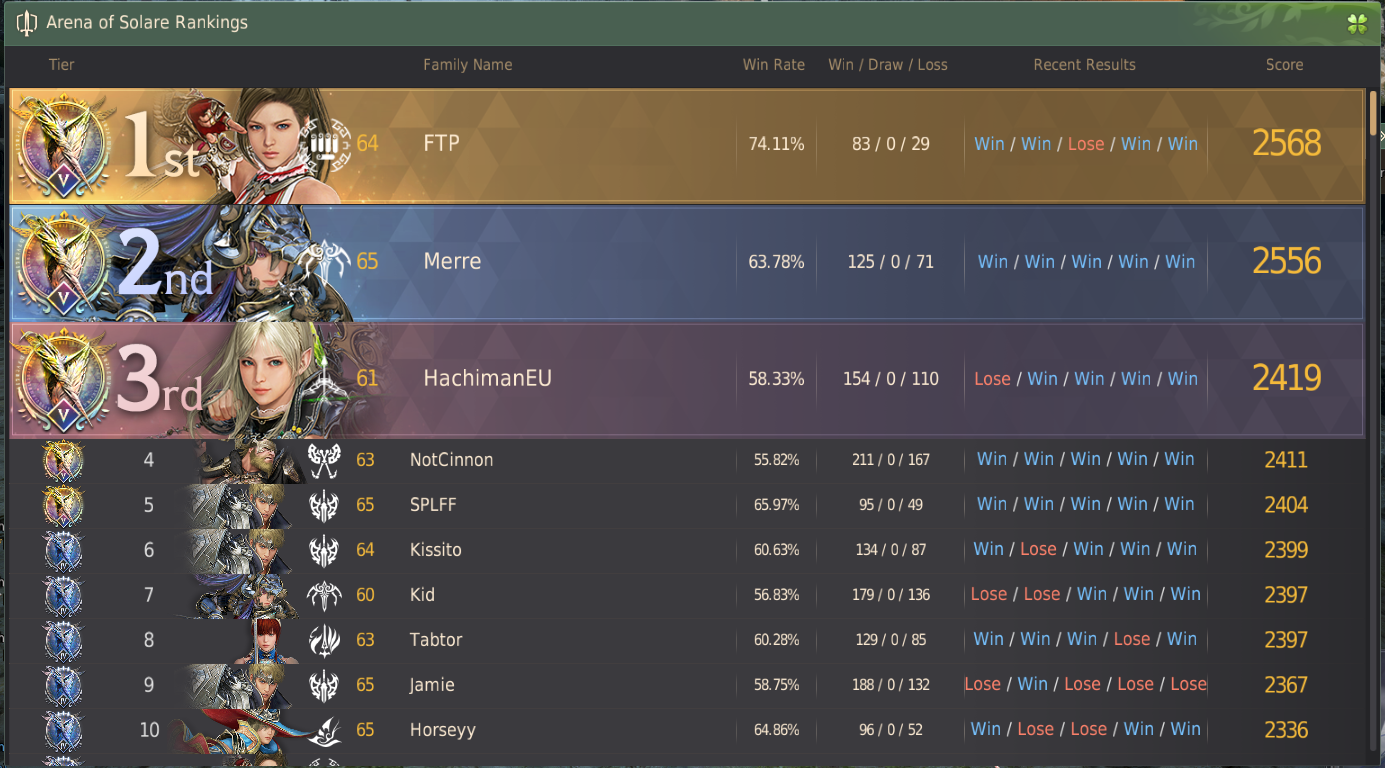 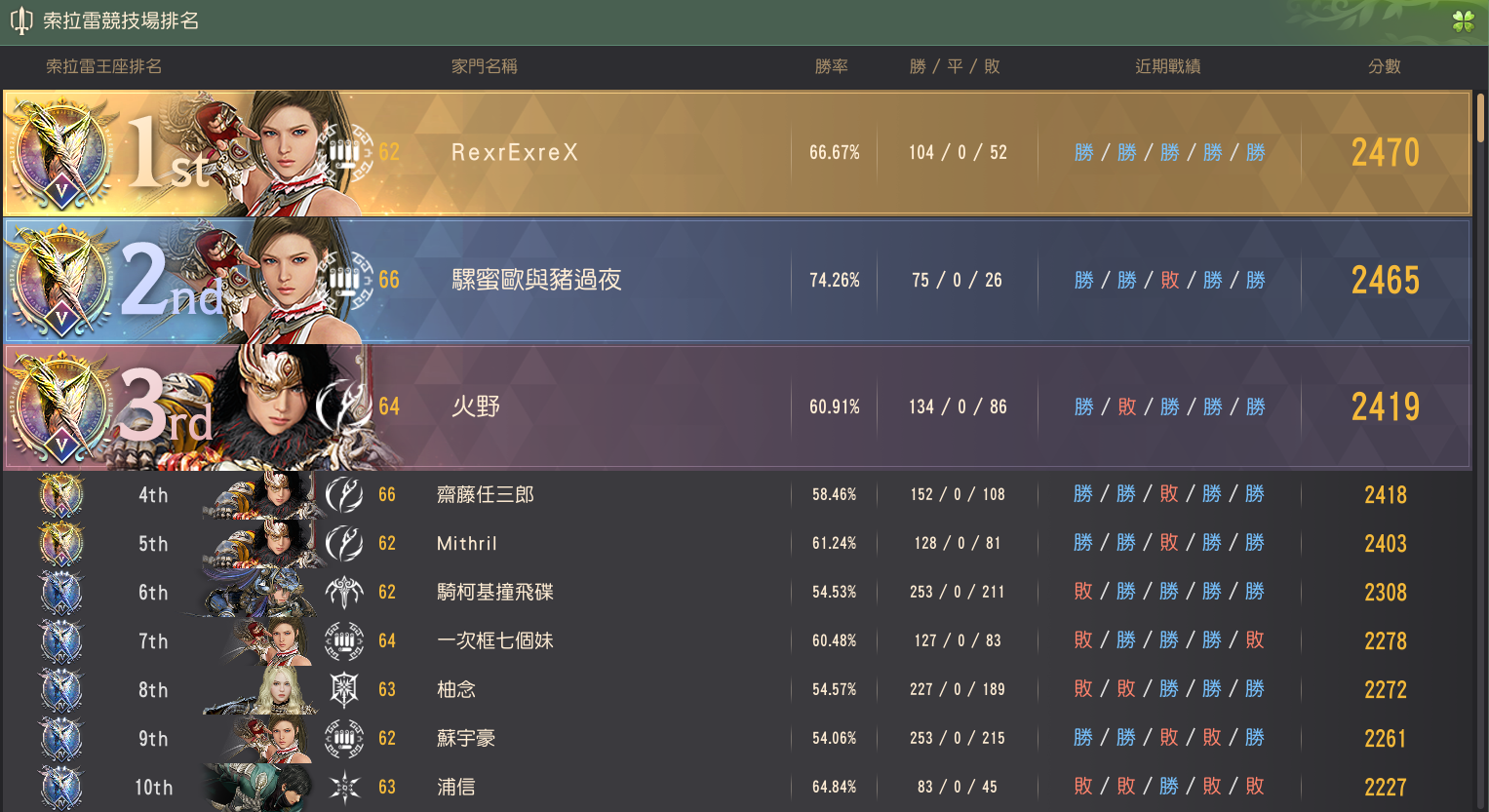 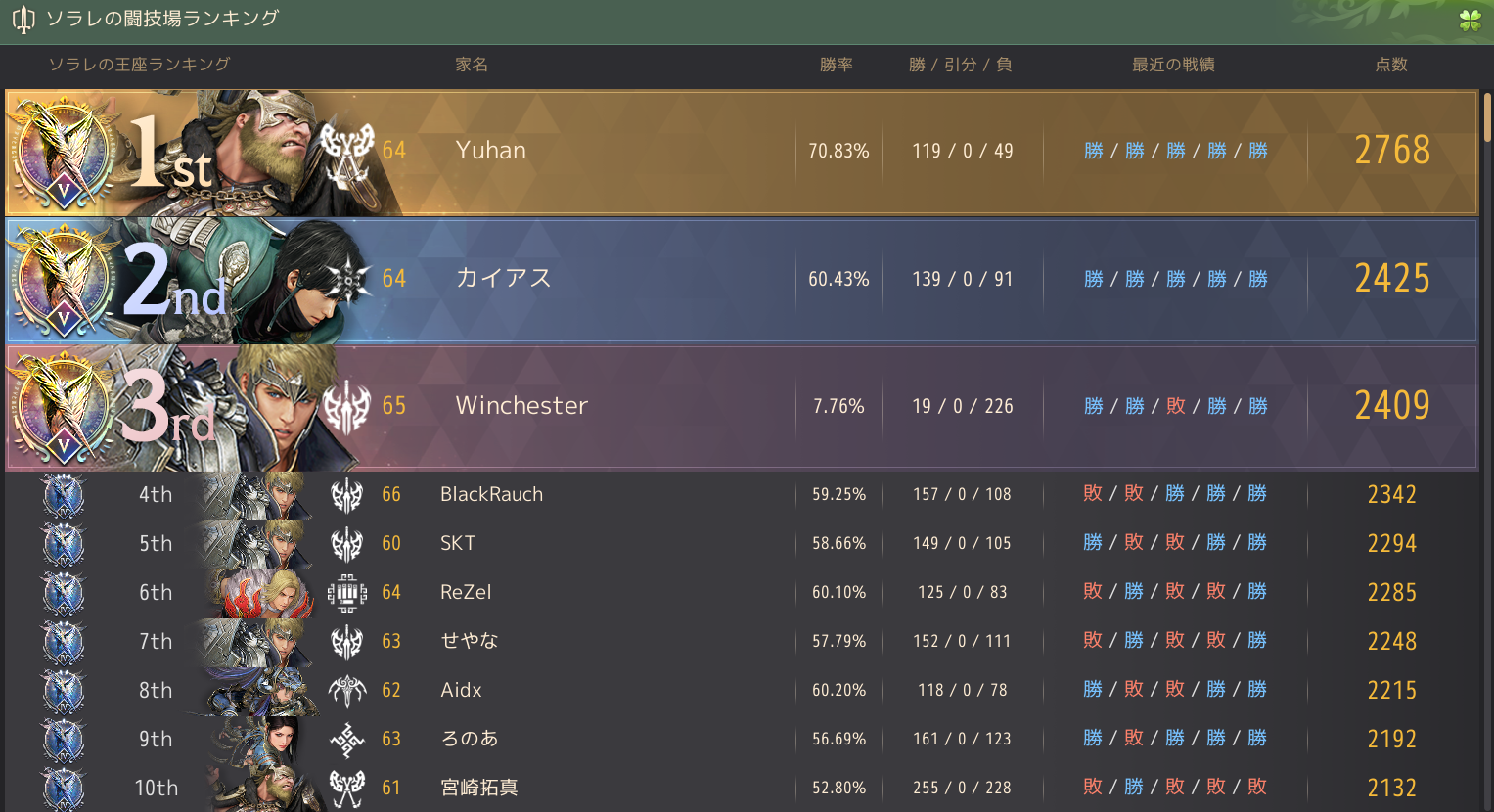 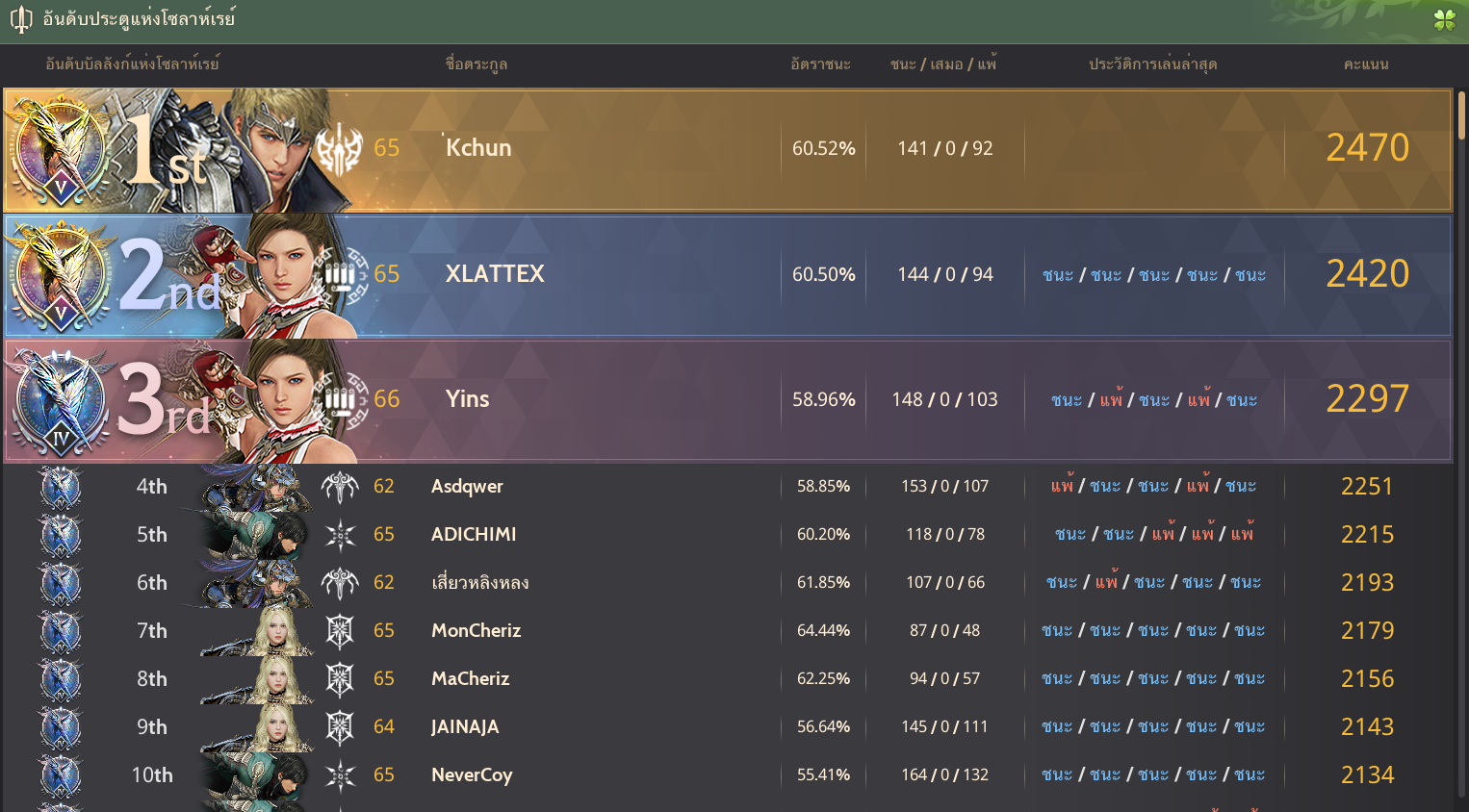 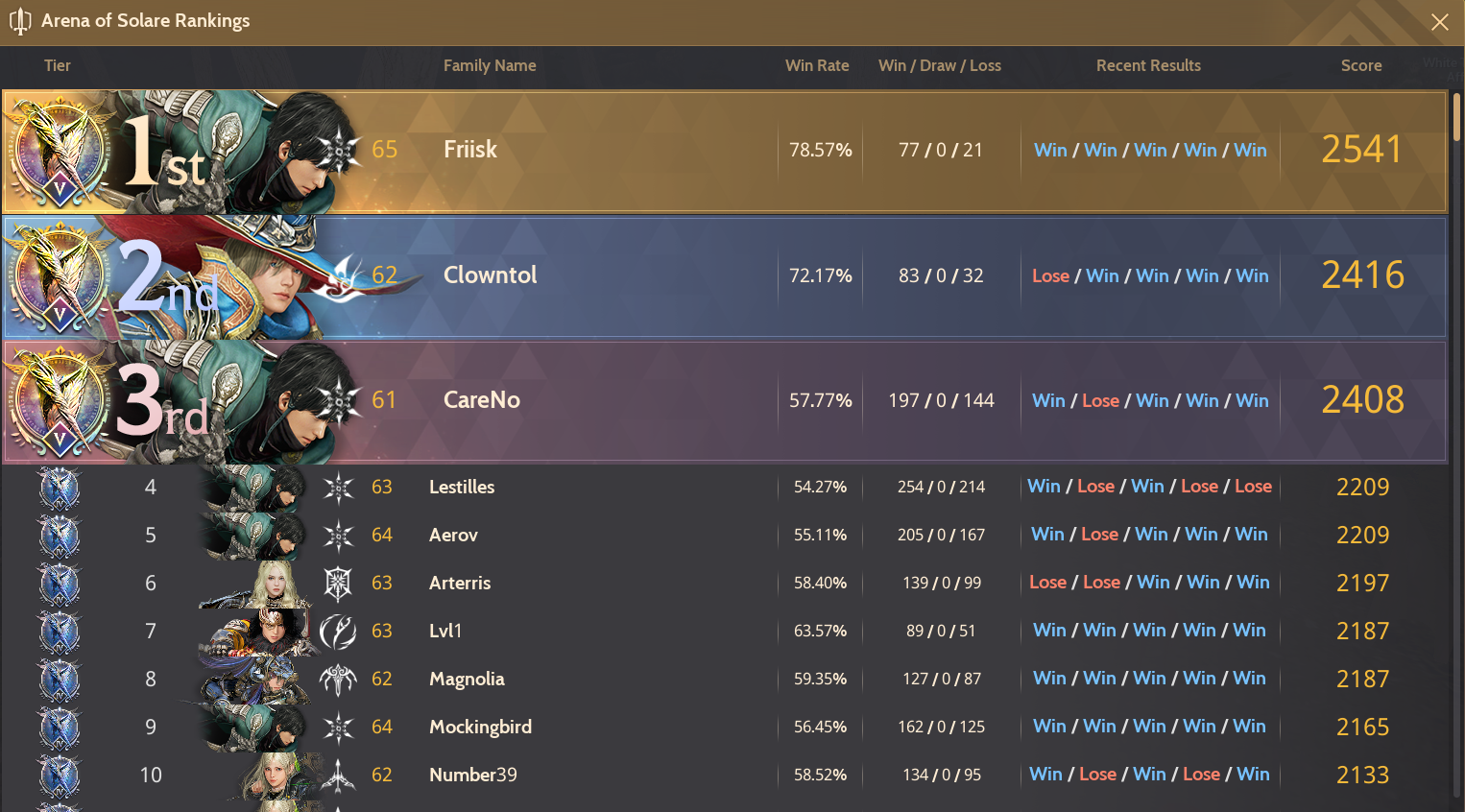 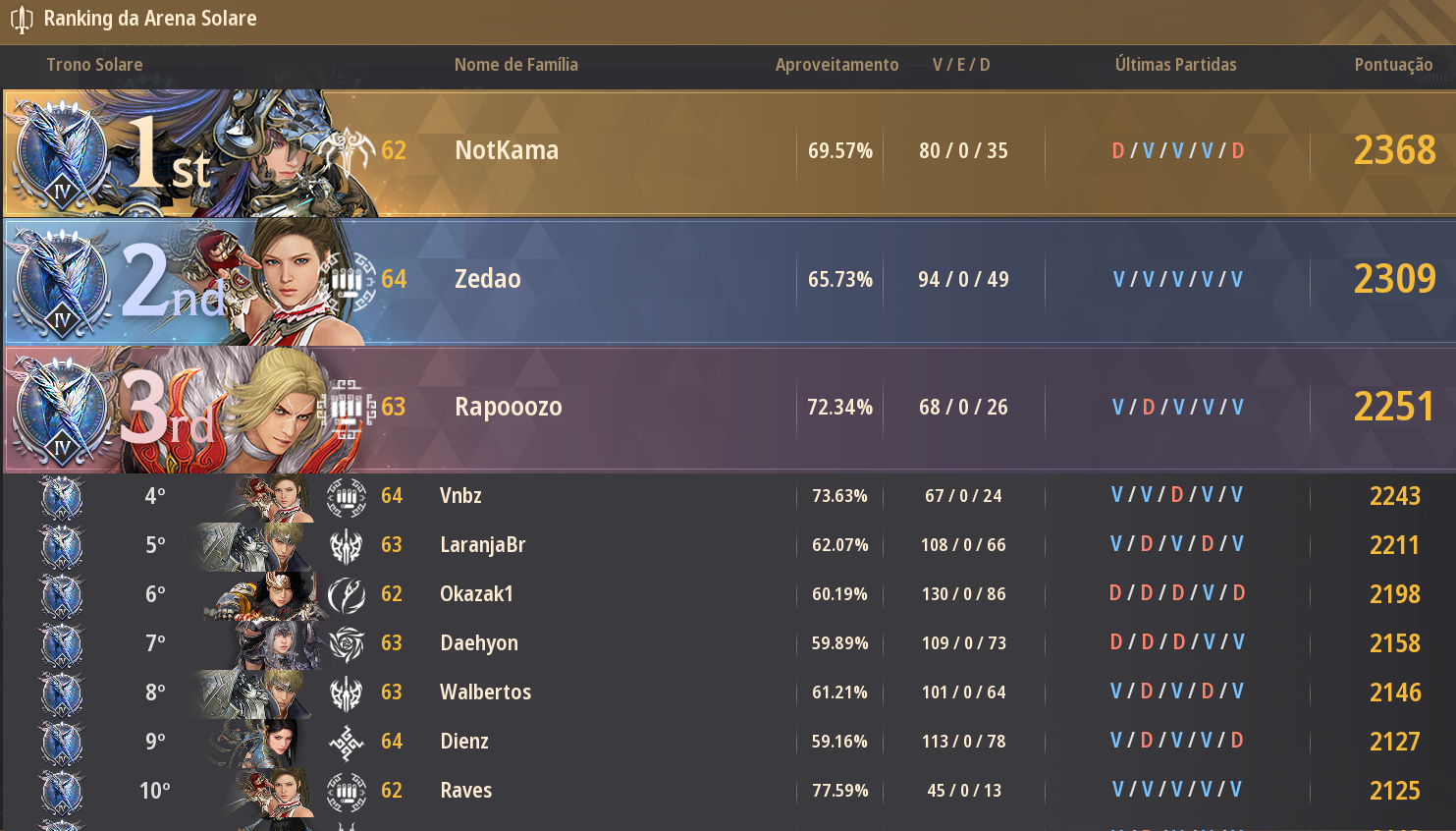 Cron Meal cooldowns have been reduced from 30 minutes to 10 seconds.
Cron Meals were used in a variety of different content, but were inconvenient to use if ever they were accidentally consumed due to the long cooldown times.
To prevent such mishaps, we decided to reduce their cooldown to 10 seconds. However, considering how Health EXP can be gained from food consumption, we decided to add the ""Satiated"" debuff to keep the rate of gaining Health EXP the same as before.
Please note that certain other food effects can still be stacked, hence the reason why we chose to retain their respective cooldowns as before.

● Separated [Nova] Aquila Gloves and Shoes from the [Nova] Aquila Armor.
- Added [Nova] Aquila Gloves and Shoes to the outfit boxes that contain the [Nova] Aquila Armor.
* Adventurers who had the [Nova] Sephia Aquila in their possession will find the [Nova] Aquila Gloves and Shoes in their storage in Heidel.
※ If your outfit's dyed settings appear different from before the update, please contact [Support] with a screenshot of your original dyed setting.
● Fixed the issue where TET (IV) and PEN (V) Blackstar Daggers wouldn't display its visual effect for Rangers.
● Improved the geographical accuracy of the "[Event] The World They Live In" item you can obtain from Kakuo.
● Changed the Central Market Warehouse Capacity increase obtained from the Blessing of Kamasylve from +2,000 VT to +4,000 VT.
● Added crafting details to the item description of Kagtunak, a material needed to craft a Dark Red Fang Crystal.
- Red Essence x1, Oil of Fortitude x1, Thuja Sap x5, Powder of Rifts x10
● Fixed the Statue of Blind Faith Ornament's buff effects to match its item description.

● Added several new side quests to the world of Black Desert.
- Work supervisor Montene wishes to do something nice for the freezing workers of Eilton.
- Benns Lamute of the Lamute Gang heard a rumor regarding treasure chests at Papua Crinea Island.
- A soldier guarding the supply manager's wares in Heidel has yet to hear back from his brother at the Castle Ruins.
- They say a man at Marino Farm craves to taste the fabled "grape".
- A hungry child in the Calpheon Slum is in need of aid.
- A man in Valencia appears to be in dire need of a break.
● Changed the conditions for acquiring knowledge for 'Swaying Ship' and 'Beautiful Structures' in Atoraxxion: Sycrakea to be more natural.
● Changed the objective description to be more detailed for '[Crossroad] You Can Do It!' and 'I Think You Can Do It'.
● Added new crafting method in the Adhesive for Upgrade knowledge description.
● Improved Miya's Delivering Goods quests, accepted in the Dancing Marlin Tavern at Velia, to receive the trade good immediately when accepting the quest.
- Affected Quests: Delivering Goods: Baremi Island, Delivering Goods: Narvo Island, Delivering Goods: Tinberra Island
- Accept the quest and obtain the goods through dialogue → Accept the quest and obtain the goods immediately if there is an empty slot in your Inventory
● Improved on the energy exchange function where you could not exchange energy for energy potions via Alustin in Velia if the character had 200 or more energy and did not complete the renewed Balenos questline.
● Improved the "Traveler's Map" item, received as a reward for completing the "Purified Ritual" quest, to be usable near Sarma Anin during the Mediah main quest "The Kingdom of Mediah."
- Therefore, the quest location of the quests that required you to cross the Mediah Castle bridge was changed to a location before the bridge.
* The Black Sun, [Boss] Awakened Black Spirit, Purified Ritual, The Kingdom of Mediah

● Improved so that the guild name, Family name, character name, and title are differentiated with different colors when Conquest War and Node War begin.
- The color change is applied to the guilds that are participating in Conquest War and Node War.
* Adventurers that have their colors changed will be easier to spot and the title they have equipped will no longer be visible.
▲ Classification for each guild showcased on the World Conquest War official broadcast is applied.

● Applied the following changes to cutscenes:
- Improved so that Monster HP bar shows during combat in cutscenes.
- Improved so that HP, Breath, MP/WP/SP bar shows in cutscenes.
- Improved so that Black Spirit's Rage shows in cutscenes.
● Fixed the conversation in Heidel between Grusha and Constante, the owner of the Golden Toad Inn, to be less awkward.
※ These lines can be viewed by a class that has completed "[Balenos] Farewell, Grusha" after completing "[Balenos] [Crossroad] The Aged Chief's Last Gift".
● Fixed the issue of some animations appearing awkward when opening treasure chests hidden throughout the world of Black Desert.
● Removed Sausan Watchtower of Sausan Garrison so it doesn't impede the auto-navigation course.
● Applied the following changes to the opening tutorial:
- Changed so your character can no longer move further than a certain distance from the tutorial zone.
- Improved to no longer display icons unnecessary to complete the tutorial.
- Fixed the issue where your stamina and Black Spirit's Rage bars appeared abnormal.
- Fixed the issue where you could proceed with the tutorial without defeating all the monsters.

● Added the following daily quests to Blood Wolf Settlement Monster Zone info UI:
- Desire for Revenge, Enormous Blood Wolf, Defeat the Blood Wolf, Defeat Main Forces, Kagtum's Faith, Before Gaining Strength
● Applied the following changes to Tier 5 Pet UI:
- Added a button to the Pet UI providing information about Tier 5 pets if you have not yet completed the [Pet] Domesticated Squabbles questline.
* This button will display information regarding the added functions and how to start the questline.
- Improved so that that Tier 5 Pet Training screen displays the description text and no longer shows pets that cannot be trained to Tier 5.
- Fixed the issue of some text strings being awkwardly displayed on the Tier 5 Pet Training screen for Gamepad UI mode.
- Fixed the issue of some Talent descriptions being awkwardly displayed when choosing a pet to train from the Tier 5 Pet Training screen.
● Fixed the issue of overlapping with another UI when adjusting interface scaling and using Sticker UI.
● Fixed the issue of Saying of the Day not displaying in the guild window (G) for Gamepad UI mode.
* You need to use the keyboard and mouse when editing.
● Fixed the issue where equipped outfits did not appear in the Item Extraction window.
- Equipped outfits will now appear at the very bottom of the extractable list.
- Using the "select all" button will not select any equipped outfits.
● Made the following changes and improvements to Game Pad UI mode:
- Added key guides for controls within the Monster Zone Info UI.
* Navigation: Left Stick Click
* View Item Description: X
* Search: Y
- Added the key guide stating that you says you can press "A" to use the Monster Zone Info UI in the World Map (M) when the game pad cursor is on the button.
- Improved to be able to gather immediately after equipping the Liana's Tool Bag without restarting the client.
- Fixed the issue where pressing "RS" in the My Information window did not immediately move the cursor to the "My Stats" button.
- Improved the movement of the cursor when removing gathering tools from Liana's Tool Bag to appear more natural.
● Fixed the issue where the guide UI would keep appearing in the Pet menu even after setting to "do not display again" if you hadn't complete the "[Pet] Domesticated Squabbles" questline yet.

● Fixed the issue of not being able to register color dye to the palette for Gamepad UI mode.
● Changed so you can now start Processing (L) when your character is idle out of combat.

● Fixed the issue where you could only purchase one item at a time when using the Central Market via the website and the Black Desert+ app.
● Changed the text displayed when attempting to log into the official website with a Steam account without a Black Desert account.
● Improved the size of the videos played on the main page of the official website.