(Patch size: approx. 1.12 GB)
- Please note that the update for Steam may be larger than the size listed above.

Dawn of Dragons Events: At a Glance

Event 5. The Dragon Appreciation Society is Looking for Talent 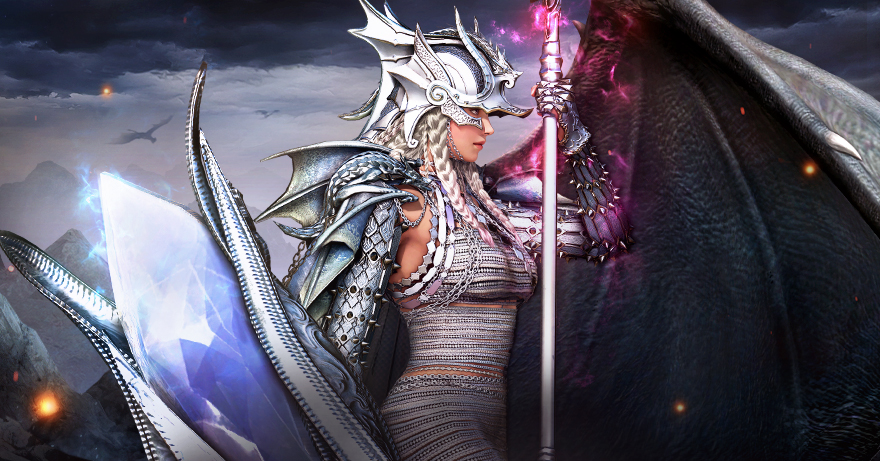 Drakania’s Awakening is finally released for all regions on July 27, 2022.


Unlike other classes, we began developing her Awakening after her Succession. This was rather a bold and new decision on our end, and we are finally glad to be able to reveal the news of her release to all of our Adventurers who’ve waited with great anticipation. We hope you enjoy her Awakening form.

To go into greater detail regarding her development process, our primary focus was to introduce new combat mechanics that allow Drakania to perform quite differently in Awakening compared to her Succession. Since she is dual-wielding spears, we wanted her movements to feel more primal, and we focused on a “stance dancing” mechanic that emphasized manual control of the class with precise timing of skills.

Drakania’s Hexeblood form is focused on swift and relentless attacks that chain together to overwhelm opponents, while Dragonblood is a more heavy-hitting form. You may initially feel slightly overwhelmed by the different variations of certain skills available in both forms. The basic animations for the skills are similar, so we felt that once Adventurers grow accustomed to these differences. Along with the “stance dancing” mechanic (which can also automatically activate after certain skills), we will see more and more Drakania Adventurers maneuver between forms with relative ease. (Of course, since her Awakening was designed to be so conceptually different from previous classes, we do expect it will take some time for Adventurers to get used to as it may appear very complex at first glance. We hope you’ll take the time to see her true ability shine.)

● Aerial Burst - Flow: Obliterate
- Unleash the might of Dragons to crush all those nearby, then obliterate them by slamming down your trion.

● Doombringer
- Channel the winds into your trion’s left spear, ascend, then come crashing down to the ground.

● Tectonic Slam (Hexeblood)
- Combine both spears to channel the winds, then charge toward the enemy.

● Tectonic Slam (Dragonblood)
- Combine both spears, then unleash the winds forward to push back the enemy.

● Sundering Roar (Hexeblood)
- Channel the winds into your trion’s left spear, then unleash them forward. Set your right spear aflame, then leave a burning claw mark on the ground.

● Sundering Roar (Dragonblood)
- Channel the winds into your trion’s left spear, then call upon the might of Dragons to unleash an earthshattering roar forward. Your destructive Dragon breath decimates all enemies ahead.

● The "Dawn of Dragons" Season Pass is here! 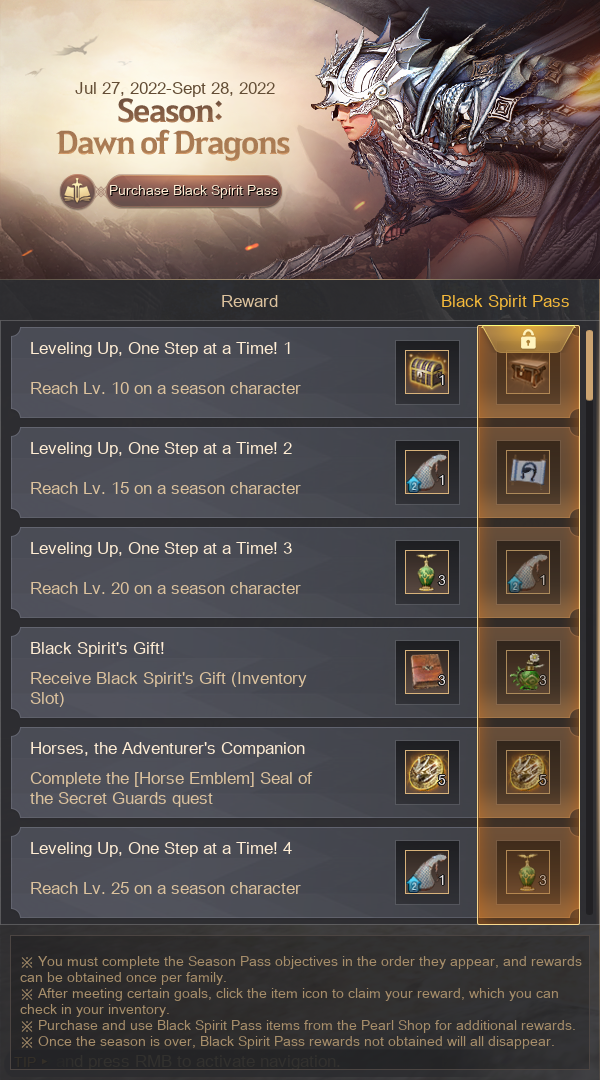 Tip! A guide for New Adventurers!
※ For more information, please refer to the [Adventurer's Guide - Season Server Guide].
- The contents on the left-hand side of the Adventurer's Guide are there to help you better navigate through the guide.

The Marniwave is our answer to all the feedback we received requesting for music to listen to while mounted. Now Adventurers will be able to turn on the Marniwave while riding most mounts (including ships) and choose from a variety of music to best match your tastes. You can also set the Marniwave to turn on automatically each time you mount up as well. The music channels of the Marniwave include Adventurer-favorite ""horse music"" along with several new additions. We plan on adding more and more songs to these channels in future updates.

While adventuring out in the world of Black Desert, you will come across a diverse range of locations that can be wonderous or frightening, warm or freezing cold. At times, thunder and lightning strikes, warning of the imminent rain soon to come. We hope that the addition of the Marniwave will compliment those unique moments so they can be better savored by our Adventurers. Thank you.

● Added the Marniwave, a music player for listening to a variety of background music in Black Desert.

My fame shall reach far and wide like the unrelenting tide!

Family Fame constitutes of a daily Silver reward that grows as you continue your adventure in the world of Black Desert by increasing your combat prowess, life skills, knowledge (energy), and contribution points.
Thanks to the past update where we increased the Item Drop Rate buff granted by your Family Fame, a greater number of Adventurers showed interest in Family Fame. Considering the current state of game balance, we decided to increase the funds rewarded by Family Fame, particularly to increase in greater numbers in lower levels.

● Increased the amount of Silver obtained daily via in-game mail from your Family Fame.

※ Combat Fame factors in the total sum of the combat levels of all characters in your Family. Characters from Lv. 56 will count for double, from Lv. 60 quintuple the fame.

※ Special Fame factors in your Knowledge and Contribution Points.

| TAMER
● Evasion
- Fixed the issue where you could maintain the Invincibility effect of other skills by comboing with the skill laterally.

| MUSA, MAEHWA
● Musa Spirit (I to Absolute)
- Fixed the issue where the key guide wasn't being highlighted.

● Decapitation (I to Absolute)
- Fixed the issue of the skill's additional hit damage being applied abnormally.

Awakening
● Coldsnap
- Improved so that you can combo from Red Moon with your kerispear.

| WITCH, WIZARD
Succession
● Prime: Earth Arrow (I to II)
- Fixed so that effects display smoothly when using the skill after Succession: Magical Evasion.

| WIZARD
● Flame's Calling
- Changed your summoned minion to no longer disappearing if you switch to equip a matchlock after using the skill.

Awakening
● Earth's Calling
- Changed your summoned minion to no longer disappearing if you switch to equip a matchlock after using the skill.

| MYSTIC
● Prime: Somersault
- Fixed the attacks to now target the same area as the effect.

| GUARDIAN
● Fierce Disdain
- Improved to now activate before the skill animation begins when used via command keys with your jordun while guarding.
● Fireborne Rupture
- Fixed to now activate the Black Spirit version of the skill when comboed from God Incinerator.

● Added a recipe to mass process Cron and Marvelous Meals if you are at least Cooking Skilled 1.
- Nadia Rowen, who learned how to cook directly from David Finto himself, has been sending cooking vendors across the continent her special sauce.
- Cooking vendors in town will now sell "Nadia Rowen's Special Sauce" from their wares.
- Use Simple Cooking with 10 times the normal ingredients to cook Cron or Marvelous Meals with Nadia Rowen's Special Sauce to obtain 10 meals worth of food. 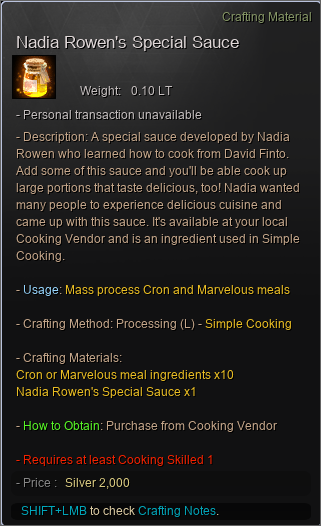 ● Changed the item descriptions for Fiery and Frosted Black Stones to now mention that they can be used to upgrade Caravel and Galleass vessels.

● With the release of Drakania's Awakening, the Marni's Pocket Watch item has been removed.
- Any item used to reform or that was transfused into Marni's Pocket Watch, such as Inverted Heart of Garmoth, Heart of Karanda, and any crystals, will be moved to your storage in Heidel.

We seek to change how you can obtain Mythical Feathers. First off, we will be removing the complicated means of obtaining them from the Old Moon Grand Prix and adding a new weekly quest to obtain them instead. We also increased the amount of Royal Fern Roots, which are used to craft Mythical Powders, obtained through daily quests as well.
Mythical Arduanatt and Mythical Diné were originally designed as slightly difficult and challenging content not everyone could attempt at once. While most Adventurers were understanding of this intention, we've still received much feedback regarding the higher level of difficulty. We admit that we took a bit of time to find the right response, but we promise to keep looking for additional ways for our Adventurers to better obtain all relevant materials (including Royal Fern Roots).
● Added the following weekly quests where you can get Stonetail Horse Ranch essentials from Wapra at Stonetail Horse Ranch.
- You can only choose 1 of the following weekly quests which reset every Thursday at 00:00.
- The required number of Carrot Confit per training level upon accepting the "Hand over Carrot Confit to Wapra" quest are as follows:
● Adjusted the maximum price of Mythical Feathers on the Central Market.
- 20 million Silver → 40 million Silver 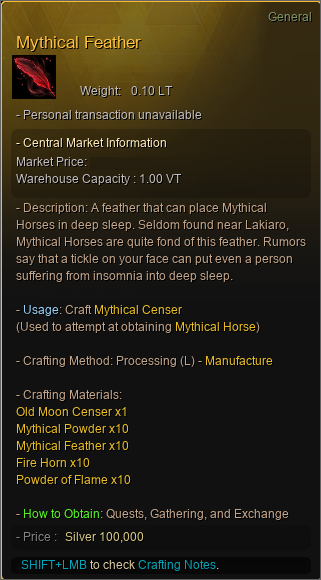 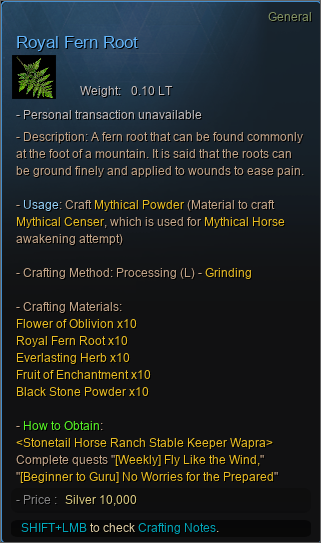 Thanks to the persistent requests of some of our Adventurers, you can now earn the once season-exclusive title "Island Hopper." We've added a tale of Lorenzo Murray's unrequited love. We hope this questline helps cool down the warm summer heat, as it will take you through the refreshing views along the waters of the coast.
● Added a new questline to obtain the "Island Hopper" title once exclusively awarded by completing "[Season] Great Pioneer's Footsteps."
- Croix, the wharf manager of Velia, seeks to aid Lorenzo Murray with his unrequited love.
- You will need to have learned the "An Epic Romance" Knowledge entry, you must activate the "Other' Quest Type in order to accept and proceed with this questline.
- Once you complete this questline, you will be able to bump into Lorenzo Murray and Clorince in another location at a certain time of day.
- Once you complete this questline, certain customers at the Dancing Marlin Tavern will mention juicy details regarding Lorenzo Murray and Clorince's date.
- Baulo has set up a lantern to stand at the location where his confession was made. Proceed with this quest to find clues hinting at the exact location.

● Improved so that navigation info does not appear when completing the following questline:
- The Minstrel of Altinova
- Play in My Stead
- Missing from Performance
- Hang in There! It's Time for the Encore!

● Improved so that navigation info does not appear when accepting the following quests:
- Why the Kitten Cries
- Grapes of Wrath
- What Do You Propose?
- [Crossroad] He'll Do Fine
- [Crossroad] Cupid Is My Name

● Added more information to the notification that appears when you press the ESC key during the opening tutorial.
● Added the "Footsteps of Wind" movement buff to be rewarded upon completing quests during the Mediah and Valencia questlines.

We have added a Location Snapshot function to the World Map to make it more convenient for adventurers who frequently reference certain locations on their map. In particular, it can be useful when browsing information displayed on the World Map outside of major cities such as Bartering or Node Management sites. We hope this minor improvement will make a meaningful impact on your experience.
● Added a function which you can snapshot your favorite locations on the World Map and easily pan the camera to them.
- You can save your current world map view by pressing ALT + key number.
- Return to the snapshotted location by entering the key number.

● Fixed the warning text that is displayed on the Select Server and Change Server screens to now account for the Elvia Calpheon Server when entering an Elvia Server.
● Fixed some species descriptions that appeared differently in Fish Guide and Knowledge. Fixed species are the following:

● Improved so that the node info does not activate when "Node" info is turned off from the World Map (M) even when the World Map is reopened.
● Added an animation to the character that appears when selecting Awakened or Ascended from the Skills window.
● Adjusted so the Repair Settings button does not overlap with Repair button.
● Added tabs to sort main and awakening weapon skills in the Skill Add-on UI.

● Fixed the issue where the Quest alert widget's background appeared abnormal after you changed the font size.
● Changed the background when selecting your starting zone after creating your character and completing the opening tutorial to appear a shade darker.