In there is no transportation that allows you to teleport or make an instant movement.

So in order to venture throughout the vast continent, a mount is a very important method of transportation.

Out of mounts, even if you own a horse with low tier, if you get one as soon as possible, the game will become more fun.

In , there are various kinds of mounts, including horse, donkey, wagon, and ship.

Each mount has its own particular role, so you can get one by one depending on how you enjoy the contents.

You can’t have two mounts at once, so the ones that you don’t use should be kept in stable or harbor.

There is a limit to the space that you can keep them, so you shouldn’t have more than you need.

Donkey is a mount that specializes in carrying cargo rather than moving fast.

It can carry more weight (LT) than a horse and has good endurance so it’s useful when making a trade.

Stable keepers sell donkeys. A donkey can be received as a quest reward or bought at stable keeper’s shop.

The horse is the representative vehicle of , and is the dream of all adventurers. A horse with high tier has an amazing speed, allowing you to run to far places quickly.

There are tier 1~ tier 6 horses, and as the tier goes higher, the basic potential gets higher (speed, acceleration, turn, braking).

Also, a horse has a specific talent.

Every time the level of the horse goes up (maximum of level30), you can obtain it by chance.

Skills such as sprint, instant acceleration and drift allow my horse to run faster, so the value of my horse goes above other horses. 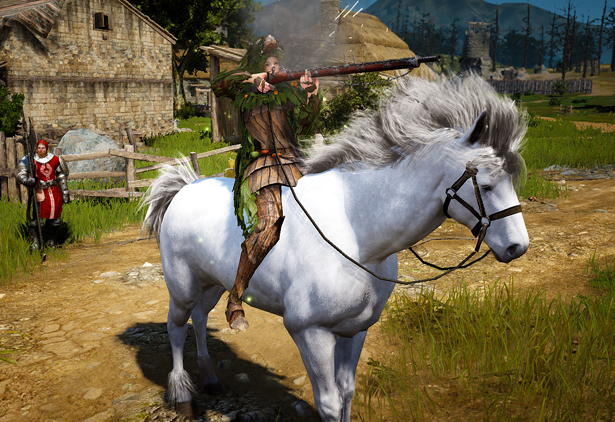 The wagon is a mount that specializes in carrying a large amount of items.

It has the most number of slots out of ground mounts, and even if the weight of the cargo gets heavier the original speed does not slow down a lot.

Fundamentally a wagon has a form of 4 basic horses carrying a wagon.

If you connect your horse to the wagon (up to 4 horse maximum), you can raise the horse as well, having twice the effect.

But please mind that the basic speed is not fast, and you can’t back up.

You can’t fix a wagon, but it has high resistance. But when resistance run out, speed goes down.

You have to make a wagon yourself through crafting.

You can obtain a wagon with low performance through quest completion.

You can use it while moving across the river or ocean.

It is a necessary mount that you need when you are enjoying the game as ocean as your friend, doing things such as fishing, sea-based trade, or moving to an island.

Out of ships, there are forms that a person can make such as raft, rowboat or fishing boat.

A ship, unlike a wagon has a life expectancy, and when all of it runs out you must discard it. But you can get a little bit of money when discarding the ship. 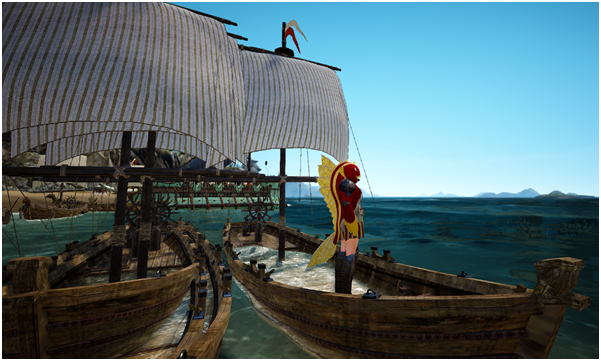 A camel is a special mount that can be earned only in Valencia area.

In the desert, a wagon becomes slower and skills become unusable,

A wagon becomes slower and you can’t use skills in the desert,

So during this time, the mount that can substitute the two is camel.

If you have to go across the Valencia desert area several times, having a camel would be good.

For camels, you can obtain by collecting Shiny Golden Seal – [Imperial Training] through imperial horse delivery. After collecting, take them to the stable Keeper NPC of Valencia area for exchange.

A horse can learn and use skills.

Other than the basic skills, when the level of the mount goes up, it learns new skills by chance.

There are movement focused skills such as ‘Sprint’ or ‘Drift’,

Or attack skills such as ‘Hind kick’ or ‘Fore chop’. 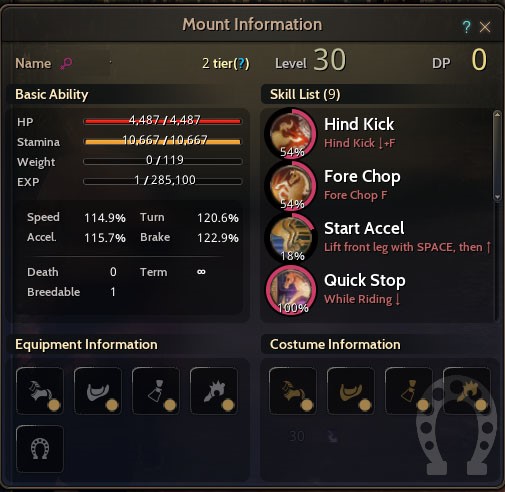 Every time you use a skill the skill EXP goes up,

And if you fail skill activation there is a chance that you will fall down from the mount.

More endurance is spent when failing a skill rather than succeeding,

But you have more EXP Gain.

If you want to master a skill quickly, fall down a lot.

You need to prepare a lot of carrots for this time in order to recover.

If you master the skills, you do not fail anymore.

Even if your skill level becomes 100%, it doesn’t become perfect until you reach ‘master’ after constant challenging.

Depending on the character, the usefulness of skill changes,

And you can change to another skill through skill change.

Since a mount is not specialized in an attack, so it’s vulnerable to the enemy’s attack.

So it’s useful to increase defense by putting on equipment.

For example, the ‘stirrups’, which is an exclusive item for the horse, allows horseback combat, and saddle allows the horse to run faster.

‘Horseshoe’ makes the speed, which is a unique ability of a horse, to be faster.

You can get horse gear set or equipment from a stable keeper’s NPC shop, but you can make it at house workshop. 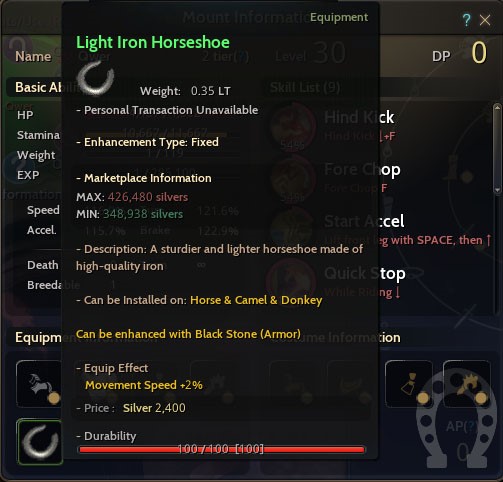 The good thing about a mount is that it has its own inventory.

So it’s great to help when hunting, gathering, fishing, and trading.

Also, if you sail on a rowboat you can get additional slots. 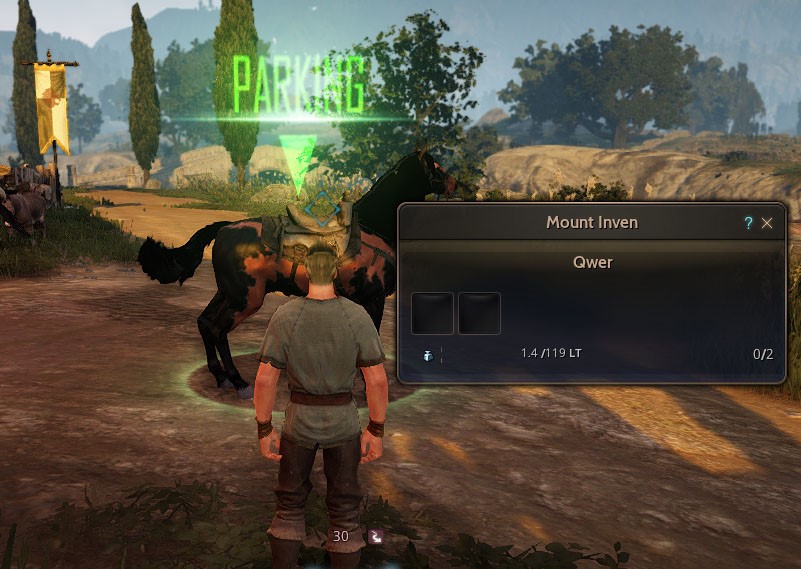