Event 3. Return of the Golden Troupe!

※ Same effects were applied to the following Cron Meals.

– All previous Energizing Cron Meals in possession will be converted to Simple Cron Meals, and those listed on the Central Market were changed like the following.

Increased the Ranger's damage ratio by an average of approx. 8.6%.

Reduced the Sorceress' damage ratio by an average of approx. 11.3%.

Quite the reduction when strictly observing the PvP damage ratio data, yet this was to balance the gap between Awakening and Succession.

While the Sorceress' damage ratio did decline, her Succession and Awakening skills' damage amount were comparatively greatly increased.

- When maintaining S+RMB+LMB after Night Crow, Dark Flame will be activated first.

Reduced the Berserker's damage ratio by an average of approx. 14.6%.

The Berserker saw a large gap between Succession and Awakening, and its PvP damage ratio was greatly reduced compared to other classes.

Thus, we greatly increased the skill damage amount of both Succession and Awakening.

In addition, while the Berserker may be a class that boasts the greatest number of grappling skills, we felt there was a bit of gap regarding how useful such skills were in light of comboing into other skills.

Hence, we chose to improve Rock Smash to combo more smoothly in order to highlight the Berserker's unique trait.

Increased thePvPdamage of the following skills by approx. 15%.

Reduced the Tamer's damage ratio by an average of approx. 12.5%.

Like Sorceress and Berserker, the Tamer also saw quite the PvP damage ratio decrease, hence we greatly increased her skill damage amount in PvP, especially her Awakening skill damage as well.

For Witch and Wizard, there was no increase in damage except for PvP.

Since these two classes could maintain similar power levels compared to other classes who had their damage ratios improved, we expect the improved version of Magical Evasion updated this week will bring about small changes to the battlefield.

Increased the Witch's damage ratio by an average of approx. 8.6%

● Thunder Storm - Fixed the issue of the skill's hits not all activating its Skill Add-On Effect.

Increased the Wizard's damage ratio by an average of approx. 8.6%.

"Increased the Valkyrie's damage ratio by an average of approx. 1.9%.

Reduced the Musa's damage ratio by an average of approx. 1%.

Flow: Moonlight Dash - Added the knockdown effect to the skill since removing knockdown from Petal Bloom may have lowered its usability.

Since Flow: Moonlight Dash can also be used through Quick Slots and not just through Petal Bloom combos, we hope to see its usage increase in battle.

Increased the Ninja's damage ratio by an average of approx. 4.7%.

Increased thePvPdamage of the following skills by approx. 5%.

Increased the Kunoichi's damage ratio by an average of approx. 6.9%.

Reduced Striker's damage ratio on average by approx. 1.7%. Most of Striker's PvP damage was increased accordingly.

Increased the Mystic's damage ratio by an average of approx. 2.9%.

Increased the Dark Knight's damage ratio by an average of approx. 11%.

Increased Archer's damage ratio by an average of approx. 1.2%.

For Lahn Awakening, her skills' attack speed was fast, yet her weakness lay in how slowly her combos connected. Through today's update, we improved the combo speed for certain skills. Also, we improved Lahn Awakening's most signature ability of closing the distance by increasing its activation speed, as we sought to further highlight her strongpoints in very specific situations.

"Due to the Shai being a class focused on Life content,

Reduced the Guardian's damage ratio on average by approx. 1.3%.

Adjusted the Guardian's Main Weapon skills being comparatively higher than other classes when at 100% Black Spirit Rage.

SahazadNesser, the King of Valencia, made an announcement that those who have contributed to strengthen Valencia will be able to rent the Royal Nesser Family's gear.

- There are 7 types of them (Main/Sub/Awakening weapons, Gloves, Helmet, Shoes, and Armor), each of which requires 50 Contribution Points.

- Season Characters can equip the Royal Nesser Family's gear too." 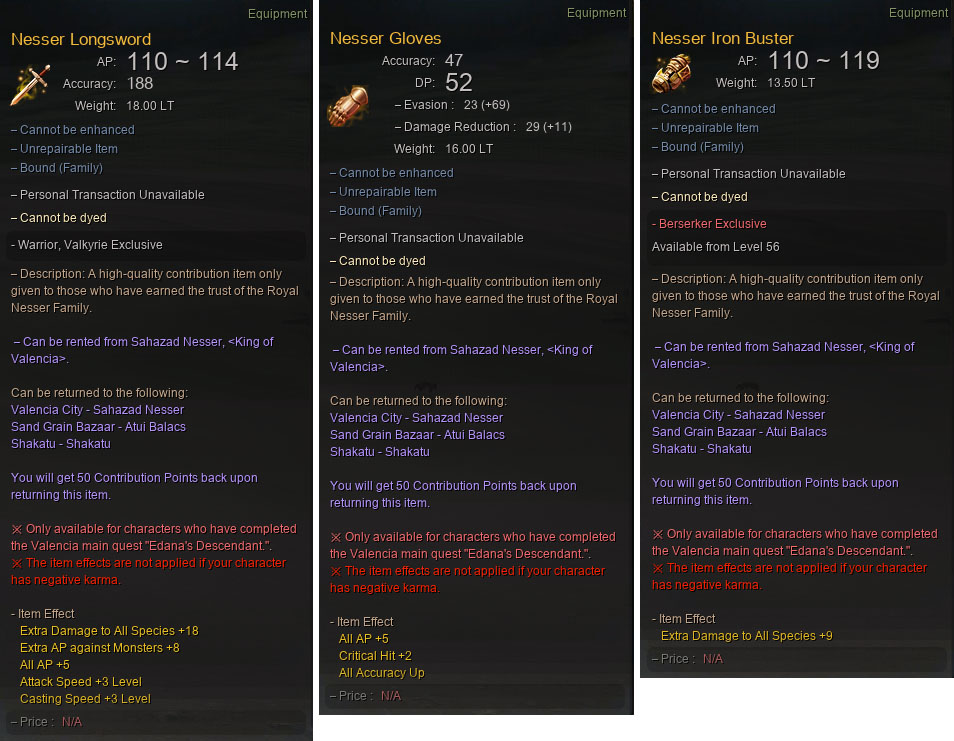 * You can rent Nesser gear by using 50 Contribution Points per item.

- Nesser gear's stat will not be applied if a character with negative karma equips the gear.

We are always trying to figure out ways to lessen the burdens of enhancement for our players. On the other hand, enhancing gear is one of the more important aspects of enjoyment in the game, so between the aforementioned concerns, we've always struggled to find the right balance. Just as we recently showcased in the Season content, Tuvala gear was one of the fruits of our long deliberations. We designed Tuvala gear to help prepare new adventurers, who will eventually graduate from Season Servers, with a slightly less difficult version of enhancement yet still founded in the fundamental principles existing in its iteration on the live servers. Yet there were adventurers who expressed their sorrows for not being able to challenge new regions due to gear that slightly wasn't up-to-par. So we decided to prepare some rental equipment that were much stronger than the existing ones.

Once you've completed the Valencia Main Quest and helped fulfill(?) the royal family's wishes, you can rent the royal family's gear for 50 Contribution Points each. We hope to see all adventurers armed with even sharper weapons and sturdier armor so their amazing adventures will continue to unfold uninterrupted."

* Use the Black Stone Powder to Mass Process.

- You can still obtain low quality hides by making an exchange with Chuck Laurie the Hunter of Balenos or Roussea, the hunter in Narcion."

You can now recover the following items by using the trash icon on the bottom right of the Inventory when you have discarded them.

Added text to the description of Leanar's Celestial Map items explaining that you should use the Find NPC function for this item at Oquilla's Eye.

Fixed the issue where hits were sometimes not applied to Llama, the hunting monster.

- These quest will be auto accepted when you obtain Dark Energy items from these areas.

- Cannot accept more Extra Quests if you already have the maximum amount of quests.

- You can complete the quest via the Black Spirit and will be rewarded with Combat and Skill EXP increase buffs.

- You can start another Extra Quest as soon as you complete one."

- Added the following text to the Hunter's Seal item description: ‘Take it to Daphne DelLucci in the Balenos Forest to get the quest to obtain Sharp Black Crystal and Hard Black Crystal.’

- These quests will be available from the Black Spirit as main quests after reaching level 56.

Added a conversation option to obtain knowledge of the following NPCs if you failed to do so on your first encounter with them.

Fixed the issue where a guild master who had the operation rights in the Arena of Arsha could not enter the arena via the reservation window.

Fixed the date text in the Black Spirit Pass window.

Added the PearlApp guide icon to the upper portion of the Guild/Item Marketplace.

Item search in the market is not case sensitive anymore.

Fixed the issue where the image of the Black Spirit would randomly appear during combat.

Changed the font of web browsers that open up from within Black Desert such as BDO Wiki, Redeem Code, etc.

- Fixed the issue of being unable to move left or right while running when transformed into the Immortal Persimmon Knight.