- Season characters are restricted from using normal gear and can only equip “Naru” and “Tuvala” gear.

- You can obtain and enhance Naru gear by completing the main questline.

- You can obtain Tuvala gear by exchanging Naru gear or seasonal materials.

- You can obtain materials to enhance your Tuvala gear from a variety of means such as defeating monsters or completing weekly and regional quests in monster zones.

Use Naru and Tuvala Gear on the Season Servers

Unlike normal characters, season characters can only equip and use gear with a special seasonal mark on the gear icons.

Once a season character has been converted into a normal character through early graduation or automatically after a season has ended, they can use all kinds of gear without restrictions.

You can obtain Naru gear from the main questline, and you can exchange Naru gear into Tuvala gear.

Your first task upon logging into the season server will be to enhance your Naru weapons and defense gear up to PEN (V) enhancement grade.

Naru gear are readily available for novice players, and, once enhanced to the maximum grade, can be exchanged into Tuvala gear. 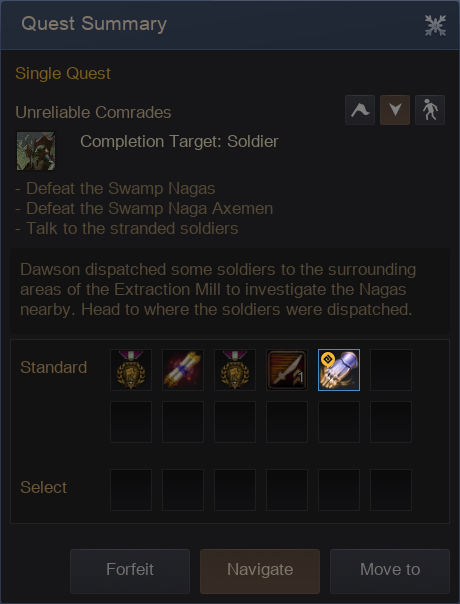 You can obtain Naru gear from main questline rewards.

To enhance Naru gear, you will need “Beginner Black Stones” that are also given out as main questline rewards.

Once you enhance your Naru main weapon, sub-weapon, helmet, armor, gloves, and shoes to PEN (V), you can bring them to the NPC Fughar and exchange them into Tuvala gear.

Enhancing Naru accessories such as a necklace, rings, earrings, and a belt are somewhat difficult. They also cannot be converted into Tuvala accessories, so we recommend you simply equip them without enhancing them to higher grades.

Please refer to the following guide for more details on Naru gear.

Tuvala gear is exclusive to season servers and the best gear set for season characters. 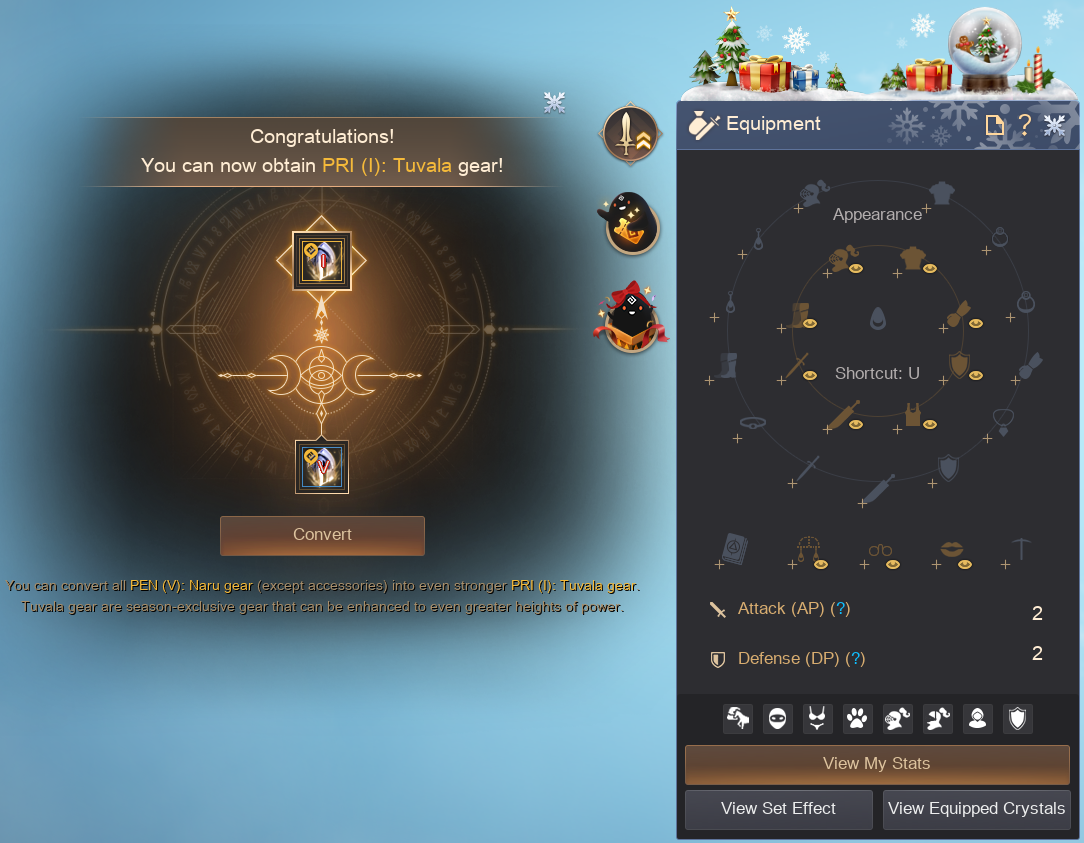 You can enhance all Tuvala gear pieces including accessories up to PEN (V) grade, and you can use the gear for a “Guaranteed PEN (V) Boss Gear” questline upon graduating from the season server.

Please refer to the following guide for more details on Tuvala gear.

To enhance Tuvala gear, you will need season-exclusive materials such as Time-filled Black Stones and Refined Magical Black Stones which can be obtained from a variety of means such as defeating monsters, completing weekly and regional monster zone quests, and Challenges. 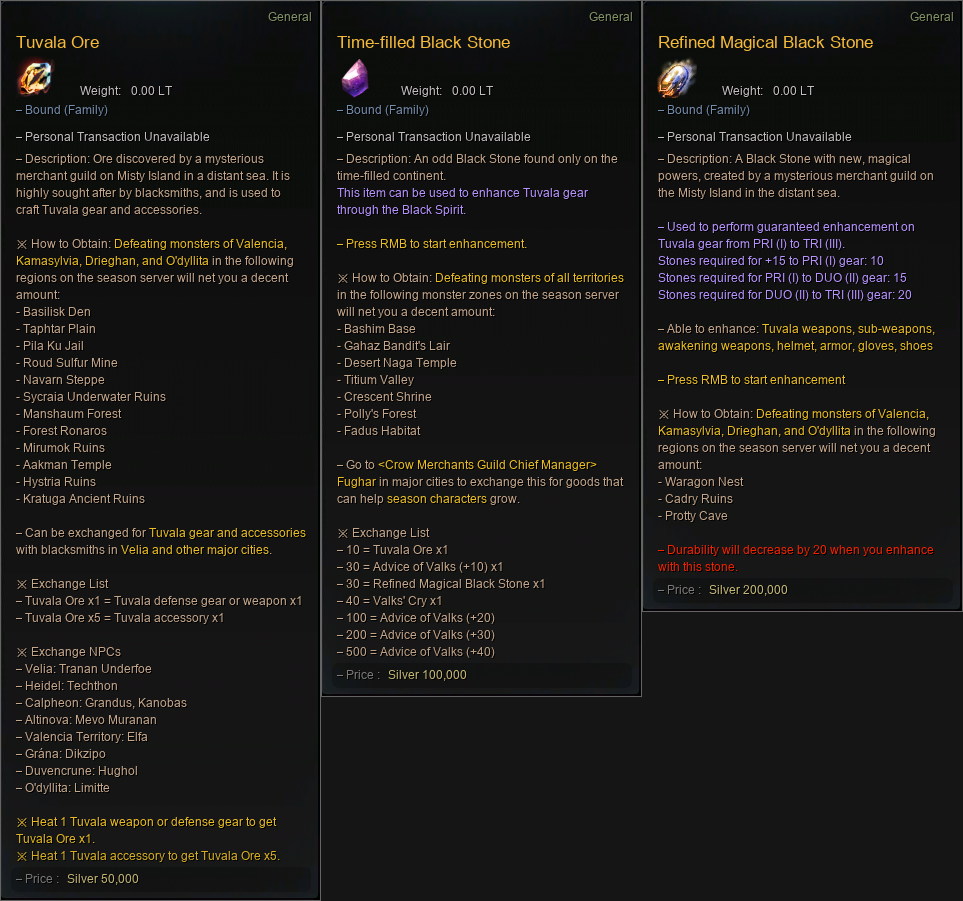 You can obtain Tuvala Ore, which can be exchanged for Tuvala gear, as well as Time-filled Black Stones and Refined Magical Black Stones, which are used to enhance Tuvala gear, only from the season servers.
■ Defeat Monsters

“Time-filled Black Stones” can be obtained from all monster zones on the season server, and in greater quantities from Valencia, Kamasylvia, Drieghan, and O’dyllita territories.

“Refined Magical Black Stones” and “Tuvala Ore” can also be obtained from defeating monsters in Valencia, Kamasylvia, Dreighan, and O’dyllita territories on the season server.

Tuvala Ore, Time-filled Black Stones, and Refined Magical Black Stones each have certain monster zones where they drop in greater quantities. You can find out more from each item’s tooltip description.

You can choose one of the “[Season Weekly] Stronger Tuvala Gear” quests found under Quests (O) → Recurring tab to obtain seasonal enhancing materials.

You can only complete one Season Weekly quest per week and they reset on Thursdays at midnight.

- [Weekly] For the Forest

- [Weekly] Bounty on the Cadries

- [Weekly] Training with the Shultz Guard

- [Weekly] Revenge against the Basilisk

- [Weekly] Accepted by the Bashim

* You can only complete one weekly quest per week, and they reset on Thursdays at midnight.

Region-specific quests will automatically be accepted upon entering certain monster zones in territories such as Valencia, Kamasylvia, and Drieghan with your season character. Once you’ve completed the objective, you will be able to claim the rewards.

You can only complete these quests once per monster zone and required levels and rewards will vary.

You can also obtain seasonal materials through other means such as Challenges and event rewards.

You may find the max durability of your Tuvala gear depleted and/or lacking the necessary enhancing materials to continue being enhanced.

The following information will help you enhance your Tuvala gear more efficiently.